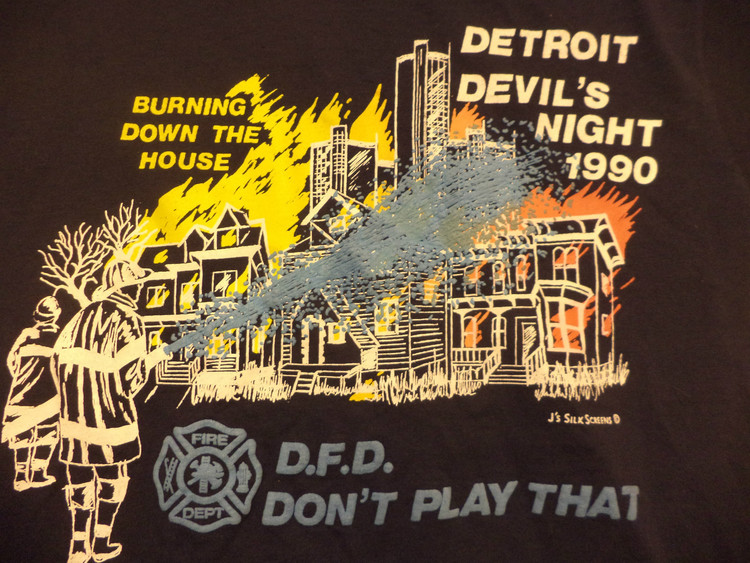 There are few ways to test the health of your community better then by seeing how well a holiday is celebrated by your neighbors. Last year, we asked if you if your city could pass the Trick-or-Treating test for Halloween, knowing that only parents living in an actual community—one replete with high social capital—would feel comfortable sending their children out into the night to ask neighbors for candy. cities with the highest percentage of social capital/trust were those that were the least “diverse—i.e. the most homogenous.

Now imagine you live in a city that, presumably, should have high social capital—90 percent of the inhabitants are of the same race. But instead, that city’s government has to issue “emergency temporary ordinance that requires anyone attempting to buy gasoline in cans to provide identification, and a 6 p.m. curfew for youths younger than 18,” from October 29- Halloween night (Oct. 31). [Detroit Angels' Night patrols ready to go, UPI, 10-26-12]. The minors’ parent or guardian will also be issued a parent responsibility violation ticket. [Detroit's Devil's Night curfew, gas ordinance to stay enforced during storm conditions, By Eric Lacy, Mlive.com , October 30, 2012]

Ze’ev Chafets wrote the still-definitive account of the terror that strikes the Motor City every Halloween eve in his 1991 book Devil’s Night: And Other True Tales of Detroit: 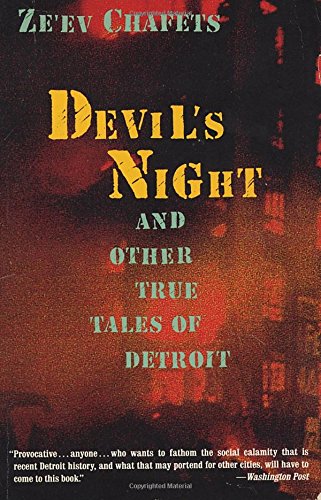 I vaguely remembered Devil’s Night. When I was a kid growing up in Pontiac, a grimy industrial clone of Detroit ten miles north of the city, it had been a time of harmless pranks—window soaping, doorbell ringing and rolls of toilet paper in the neighbor’s trees. But it had been twenty years since I lived there, and a lot of things had changed. One of them was Devil’s Night.

Even my friend’s dramatic description did not prepare me for what I saw that night. On the streets of Detroit I could sense the same rush of energy, the same sense of excitement that always accompanies nocturnal action. Police helicopters circled overhead and fire trucks, sirens blaring, raced form one conflagration to another. Cops guarded the firemen as they fought the flames. It was only when I saw the faces of the neighborhood people, mostly older blacks with long coats over their bathrobes, standing grimly on their porches, armed with shotguns and garden hoses, protecting their property, that I realized this was no homecoming rally; on Devil’s Night, they use homes for kindling.

My friend’s car was equipped with a police-band radio, and as he drove from fire to fire he gradually became the leader of a motorcade. At every stop, people gawked at the flames and passed around bottles of whiskey and thermos caps of steaming coffee. The suburbanites talked with bittersweet nostalgia about their old neighborhoods in Detroit, pointed to childhood sites now sunk into decrepitude and shook their heads. The message was tacit but unmistakable—Look at what they’re doing to our city. “

In 1954, the city had been 76 percent white. Black population growth came courtesy of the “Great Migration” of blacks from the South. In 1940, before World War II defense plants led to the migration, Detroit was 90 percent white.

Perhaps in honor of the “great revolution”—disgraced former mayor Kwame Kilpatrick’s term for the July 23, 1967 black riot in Detroit, which left 43 dead, 467 injured, 7,2000 arrested, more than 2,000 buildings torched and essentially ended white rule in Detroit—the children and grandchildren of the victors in effect reenact their triumph every Halloween eve.

In the 1994 movie The Crow, Hollywood took on the annual Devil’s Night torching of Detroit, featuring one of its favorite casting tricks—rarely found in real life— the multi-racial gang. The central plot trope: a white drug lord controlling three white and one black arsonist directs the flow of organized crime in the city.

As usual, Hollywood did not quite capture the essence of this uniquely black celebration. Chafets put it best: “Look at what they’re doing to our city.”

In a city completely controlled by black politicians and totally reliant on tax revenue from a black population that seems to have trouble sustaining a First World economy (even when inherited, as in the case of Detroit) it could be only a matter of time before money to pay for public services like firemen, and the police necessary to protect them, dries up.

Just a few weeks ago, Detroit police held an “Enter at Your Own Risk” rally in front of Comerica Park before a Tigers baseball game [Enter At Your Own Risk: Police Union Says ‘War-Like’ Detroit Is Unsafe For Visitors, CBS Detroit, 10-6-2012]. Just a few months ago, an emergency Federal grant/infusion of $22.5 million was needed to 164 Detroit firefighters on the job [Detroit Firefighters Layoffs Curbed Due To Federal SAFER Grant, More Help On The Way, Huffington Post, 7-9-2012].

Were David Duke suddenly in control of Hollywood, it would be impossible to script a more devastating polemic against black-majority rule then what has actually transpired in Detroit since both the “great revolution of 1967” and the election of Mayor Coleman Young in 1973. Toss in the reality of this black-fueled Devil’s Night, and you’d have the type of script that D.W. Griffith shot in The Birth of a Nation.

The sad reality is that Detroit’ Devil’s Night represent nothing more than a funeral pyre for Western civilization.

Although Mitt Romney is a self-proclaimed “son of Detroit” he has evaded domestic issues like the descent of our major cities into urban misery. But we aren’t far away from the Republican Party being forced to confront the unmentionable reasons Detroit burns every Devil’s Night.

If it is to remain a viable national party, that is.

Paul Kersey[Email him] is the author of the blog SBPDL, and has published the books SBPDL Year One, Hollywood in Blackface and Escape From Detroit, and Opiate of America: College Football in Black and White