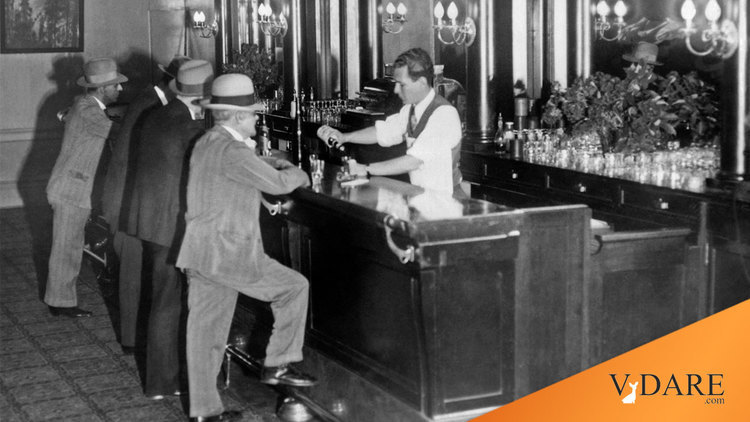 Watching The Golden Spiders, a TV version of the Nero Wolfe novel made in the year 2000, I noticed that the races of two of the minor characters were changed to African-American.

One was the butler at the victim's house, a white butler in the novel, which is not implausible change,and the other was Mort, a member of the Lips Egan gang, a white gangster in the novel, black on the screen.

This last seems unlikely—even today, gangs are almost always either one race or another for reasons of trust. This was much truer in 1953, the year the show is supposed to take place, and when the novel was written. Criminal gangs don't have to worry about civil rights laws, they have to worry about informers. Thus, multiracial gangs are mostly only seen in movies. Steve Sailer wrote in 200Â  that

As a movie critic, I see lots of films featuring one of the odder bits of Hollywood hokum: the multiethnic criminal gang. You know, the kind of mob that's as diverse as the cover of the University of Wisconsin recruiting brochure after the admissions office gets done Photoshopping it. There's a white guy, a black guy, an Asian girl, a Sikh, a Lubavitcher, an Amish farmer, a whatever. When you see a multiracial gang, you can be sure the overall movie is lame. Do you remember "The Truth About Charlie", "Femme Fatale", "Don't say a Word", "Atlantis", and "What's the Worst that Could Happen?" You don't? Well, neither did I until I looked them up. And, heck, I reviewed all of them within the last two years. (The exception that proves the rule: "Ocean's Eleven," which reveled in just how contrived is the Eleven's diversity. As Brad Pitt tells George Clooney when they discuss whom to recruit, "Off the top of my head, I'd say you're looking at a Boesky, a Jim Brown, a Miss Daisy, two Jethros, and a Leon Spinks, not to mention the biggest Ella Fitzgerald ever.")

When Steve wrote that, I thought of the original Ocean's Eleven, with Frank Sinatra and the Rat Pack. This was a much more modestly multicultural crew—various American ethnics (Italian, Irish, Jewish, WASP, and whatever Akim Tamiroff was), plus Sammy Davis Jr. And there was a reason for their variety, limited though it was. They were supposed to have been in the Army together in World War II.

On the other hand, I have no idea what Sammy Davis Jr. was supposed to be be doing in the Prohibition era Chicago gang featured in Robin and The Seven Hoods: but here he is breaking up a rival gang's saloon on behalf of Frank Sinatra:

I'm tempted to try to find some way to relate that to the candidacy of modern-day Chicago machine politician Barack Obama's candidacy, but I suspect that would be racist. (Because anything you say about Obama is racist.) Besides, Obama doesn't believe in gun rights.