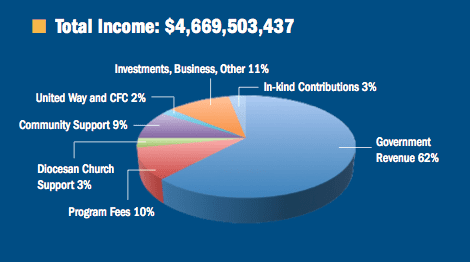 A retired doctor and his wife phoned Rush Limbaugh on Tuesday to tell their story about the San Bernardino Catholic church urging members of the parish welcome illegal aliens into their homes. Not only did the archbishop invite parishioners to harbor lawbreakers (a felony, right?) but he also to keep quiet about it to the media. Furthermore, the government put the church up to the scheme.

One wonders how many diseased, non-English-speaking aliens Archbishop Barnes is taking in.

No problema about the cost though, since the church promised to reimburse the generous (if foolish) care providers. However, the Catholic church receives millions of Americans’ tax dollars to pursue its alleged good works of refugee resettlement and other immigration services, shown as “Government Revenue” in the 2010 Catholic Charities graph, so it’s not so surprising that Washington and the church would work in partnership:

Catholic elites are highly invested in undermining American law and sovereignty. In 2013 they spent more than $3 million to lobby for amnesty for millions of foreign lawbreakers, most of whom are Catholics and are regarded by cassocks as reinvigorating the church’s dwindling attendance. Amnesty is seen by Vaticrats as a big plus for their side, but it would be terribly harmful for citizen workers who are already struggling in the jobless recovery.

Retired Los Angeles Cardinal Roger Mahony was a big supporter of illegal alien amnesty, as when he protested Arizona’s immigration enforcement law in 2010. 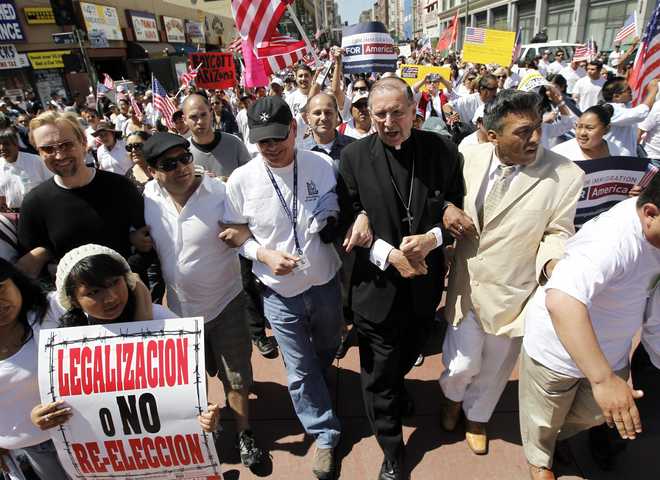 Limbaugh was properly shocked by the call, particularly given his newfound interest in the America-killing immigration catastrophe of open borders. He has been slow on the uptake but seems more comfortable with the subject lately.

RUSH: This is Ann and Ed in Southern California. Welcome. It’s great to have you on the phone. Hello.

ANN: Great. Well, we have some interesting news. My husband Eddie is on the phone with us. We live in Southern California, and we’re Catholic, active Catholics in our community, and there was a town hall meeting last evening, emergency meeting called by our local parish priest, ordered by our bishop (unintelligible) and the Archdiocese of San Bernardino. They have made the decision that they’re going to absorb the immigrants that are coming through because the federal government called the bishop’s office on Monday and they’re gonna be busing these immigrants to our communities and asking us to open our homes and to house them for up to a month. The church will reimburse us for any out-of-pocket expenses and we were told not to talk to anybody about it, especially the media. I’m not especially happy about it. My husband is a retired doctor, and he will share his concerns with you regarding this matter. Eddie, do you want to go ahead and talk about your thoughts?

EDDIE: I’m very concerned about the health care crisis that we’re facing and these illegal aliens that are coming into the United States. Doctors are being asked not to talk to the media, they’re on gag orders, both doctors and nurses, and we got a big problem because there are a lot of diseases that can come through this border bringing all kinds of stuff –

RUSH: Eddie, I just read that in some cases the lice are so bad you can see them crawling down the faces of some of the kids.

ANN: Yeah, the lice won’t kill you, but Ebola will, and so will gonorrhea and there’s syphilis and AIDS and hepatitis and diphtheria and polio, meningitis, and this new coronavirus coming in from the Middle East, so –

RUSH: Hang on. I gotta take a break. Hold your thought and we’ll continue after the break.

RUSH: We rejoin Ann and her retired doctor husband, Eddie, on the phone jointly, together with us from Southern California. Eddie, could you put Ann back to the phone or is she on with you?

RUSH: Okay, Eddie, I’ll come back to you in just a second, but, Ann, I want to clarify. Did you say that it is the Catholic Church that the government called and asked for assistance?