Dawn of the Trumpening: Jeff Sessions For Attorney General, Steve Bannon For Pope!

Yes, the sun is shining, the birds are singing (those of them fool enough to stay around on Long Island in November), Trump's in his tower and all's well with the world. 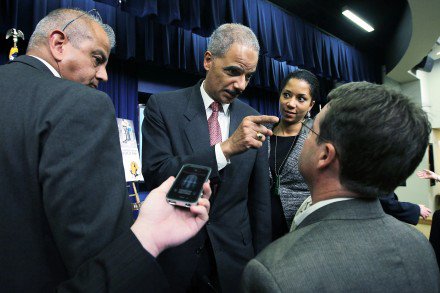 Latest news: Senator Jeff Sessions has been offered the post of U.S. Attorney General. Imagine: An Attorney General who doesn't hate white people! Just a few weeks ago, this would not have seemed possible.

The CBS News report says that "Sessions was also considered for secretary of defense.” [Donald Trump offers Jeff Sessions attorney general post, CBS News, November 18, 2016] Hey, far as I'm concerned Trump can make Senator Jeff Secretary of Everything. That would sure clear some space around the cabinet table; and I don't see how the limited-government crowd could be anything but ecstatic.

A President, a Vice President, and a Secretary of Everything: government couldn't get more limited than that! Bring it on, I say.

Senator Jeff is 69. This means that, like me and The Donald and no doubt some of you, he grew up before modern speech codes settled in. This means it'll be easy for the CultMarx propagandists, when he comes up before the Senate for confirmation, to retcon him as a seething cauldron of malice and…what's the word they'll use here? Oh yes: "bigotry." Or possibly "hate." Most likely both, in fact.

Making things easier for the character assassins, Senator Jeff is a white guy from Alabama, which is practically a hate crime all by itself. And making things even easier will be the willingness of the anti-Trump Main Stream Media to believe any kind of story about something the Senator was overheard saying back in 1976, however unsubstantiated.

And then there are all those bimbos the MSM paid last month to accuse Donald Trump of having groped them; perhaps the bimbos will be recycled to say that no, it wasn't Trump after all. In the agony of the moment they mis-identified the groper. It was in fact Senator Jeff.

For sure, if they're going to derail the Senator's confirmation, they'll definitely need something stronger than what has so far been produced.

Samples of which: Some black government apparatchik, now deceased, claimed thirty years ago that Sessions had addressed him as "boy." When asked for some confirming evidence, a black lawyers' organization wrote a letter to the confirmation committee saying that the same apparatchik had told them the same tale.

Another bureaucrat said that Senator Sessions had called the NAACP "un-American" and "communist-inspired."

So what? That's fair comment. We can argue about the "un-American," I suppose, but I don't see that "communist-inspired" is much of a stretch. Arthur Schlesinger, Jr., who was and remained a very respectable historian, said the same thing about the NAACP in Life Magazine.[ July 29, 1946]

Most educated black Americans are communists, or as near as makes no difference.NAACP founder  W.E.B. Du Bois and Paul Robeson were communists. Barack Obama's parents were communists, to a good approximation, both the black one and the white one. His early mentor, Frank Marshall Davis, was an actual paid-up, card-carrying member of the Communist Party, according to the FBI.  [Frank Marshall Davis: Obama’s ‘Communist mentor’? By Michelle Ye Hee Lee, Washington Post,  March 23, 2015]

So how wrong was Senator Jeff, assuming he said the thing he's accused of saying, which he has no memory of but charitably allowed he may have said?

And then, of course, this week was marked by a Two Minutes Hate against Steve Bannon, Trump's designated adviser on strategy.

The opening shot was fired Tuesday in the editorial columns of — where else? — the New York Times, under the headline Steve "Turn On the Hate" Bannon, in the White House 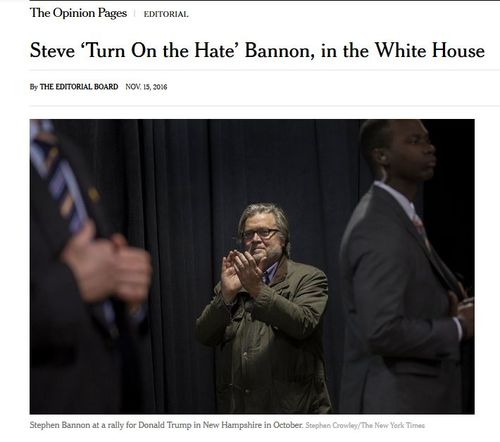 . The epithet "Turn On The Hate" is in quotes there because it's a thing Bannon said in an email to one of his editors at Breitbart.com.

Full quote from that Bannon email: "Let the grassroots turn on the hate because that's the only thing that will make them do their duty.”

The "they" being targeted there was the Republican leadership. You have to read 439 words into the editorial before they tell you that, though. It's headlines that make the lasting impression; so the lasting impression NYT readers will come away with is that Bannon wants us to turn on the hate against the Left's Designated Victim Groups: blacks, illegal aliens, homosexuals, and so on. 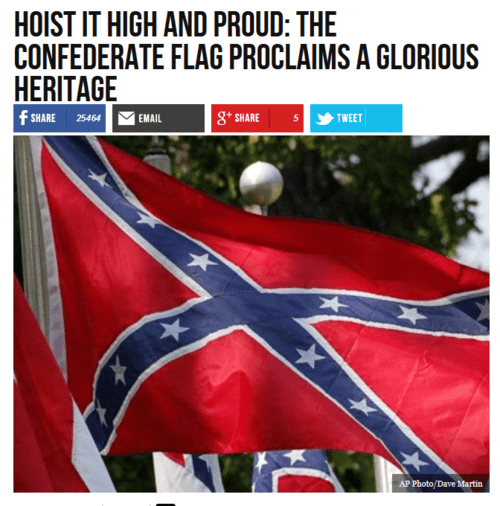 To further make their readers swoon, the Times editorialists quote three Breitbart.com headlines, presumably the worst they could find out of hundreds scanned.

First headline: Hoist It High and Proud: The Confederate Flag Proclaims a Glorious Heritage, which the NYT notes was published two weeks after a lunatic who owned a Confederate flag murdered nine people in Charleston, South Carolina.

OK; but up until that lunatic gave the CultMarx commissars an excuse to ban it, the Confederate flag was no big deal. It happened that a couple of weeks before the Charleston murders, my wife and I had been on a tour of Civil War battlefields. I noted with interest at the time that the visitor's center at the Gettysburg battlefield — run by the Federal Parks Service — sold the Confederate flag in several sizes. We saw a party of teenagers coming out of the center with one of the bigger sizes, wrapping it round themselves and laughing merrily.

Nobody thought anything of it.

The old consensus, which I liked, was that the American Civil War was fought with dignity, courage, and sacrifice by brave and honorable men on both sides; the one side for the right to secede, the other side — which included slave states, let's remember — for the union. Those who fought, on both sides, and the symbols they fought under, are entitled to respect from those who came after.

The essay at Breitbart.com under that headline, by Gerald Warner, follows that old dispensation. It's a good, robust, thoughtful piece. The NYT's objection to it is that they favor the new dispensation, the one imposed on the country by the commissars after Charleston. This new dispensation says that Confederates were loathsome scum, whose descendants should have been eating dirt for the past 150 years, and had better start eating it now if they know what's good for them.

Milo's not really my cup of tea, and this one's a bit silly; but it's by no means fact-free. He links, for example, to an academic study that found some forms of birth control cause weight gain.

Third headline: Gabby Giffords: The Gun Control Movement's Human Shield. This is a Breitbart.com piece from March last year. Executive summary: Giffords, who was shot by crazy guy Jared Loughner in 2011, wants Congress to extend background checks to a broader category of gun buyers. Yet Loughner obtained his gun after a background check; so Giffords would have been shot even under the new laws she's promoting.

That's a nice point. It's something people should know before lobbying their representatives to vote for or against these new laws. Breitbart.com was doing a useful public service there.

As you can tell, the NYT editorial against Bannon left me neither shaken nor stirred. Its heavy hints that Bannon is an anti-Semite were especially preposterous, as detailed in a scathing rebuttal from David Goldman at PJMedia. Sample quote from David:

Not a single article appeared in Breitbart.com during the past two years that could not have appeared in Israel Hayom, the leading Israeli daily.

If you really want a window into Steve Bannon's thinking, I recommend the long post headlined This Is How Steve Bannon Sees The Entire World, posted at BuzzFeed, November 15th. It's a transcript of a talk Bannon gave to a conservative Roman Catholic group called the Human Dignity Institute in the Vatican two years ago.

Bannon's Vatican talk defies brief summary, but his strongest theme is the need to imbed capitalism in some kind of firm ethical order based on patriotism and Christian morality. Without that imbedding, he says, what you get is Third World-style crony capitalism or Putinesque state capitalism.

You might agree or disagree, but it's good thought-provoking stuff, and hateful only of things we should hate, like crony capitalism.

So, weighing Steve Bannon in one pan of the balance, and the New York Times editorial board in the other, who exactly is "turning on the hate" here?

I think I know the answer, and it's not Steve Bannon. John Derbyshire [email him] writes an incredible amount on all sorts of subjects for all kinds of outlets. (This no longer includes National Review, whose editors had some kind of tantrum and fired him. ) He is the author of We Are Doomed: Reclaiming Conservative Pessimism and several other books. He's had two books published by VDARE.com: FROM THE DISSIDENT RIGHT (also available in Kindle) and From the Dissident Right II: Essays 2013. His writings are archived at JohnDerbyshire.com.