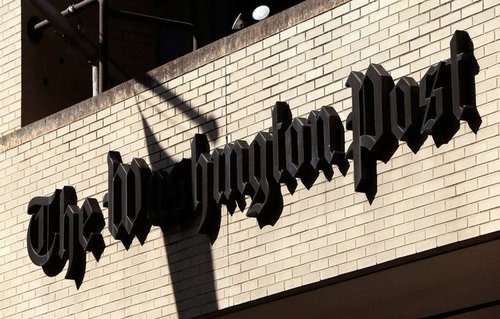 Employees at The Washington Post are finally getting a taste of what they are trying to impose on American workers, as new owner Jeff Bezos is imposing a cheap labor regime on Washington’s leading newspaper by cutting pensions. It couldn’t happen to a nicer group of people.

WaPo is a longstanding supporter of mass immigration and infuriatingly resistant to making any connection between American poverty and the deliberate importation of millions of workers from the Third World. It’s therefore a time for Schadenfreude now that the policy consequences of open borders and globalization are biting back.

The company also said that in negotiations that started Tuesday, it will seek to impose the same conditions on employees covered by the union — one of the first indications of how The Post’s new owner, Amazon.com founder Jeffrey P. Bezos, will manage relations with the staff of the news organization.

The Mufson article quotes one Josh Gotbaum, former director of the federal Pension Benefit Guaranty Corp., who comments: “Sadly, rather than cutting costs by sharing them, some companies instead are giving up on providing pensions at all and dumping the responsibility and risk on employees, who are least prepared to handle it.”

And for WaPo employees, every indication is that the worst is yet to come.

The only people who benefit: the billionaire owners of the economy, just as only Jeff Bezos benefits from this transformation of the once-family-owned Washington Postinto another profit seeking machine that exploits its employees like livestock.

Still, I have to ask the question: will this make The Washington Post reporters get it? It’s said that a conservative is a liberal who has been mugged—is an immigration patriot a liberal reporter who just lost his pension?

There is no issue more relevant to economic equality, workers’ rights, and the destruction of the American middle class than mass immigration. And the only way to fight income inequality and restore the American Dream for millions is to create a tight labor market.

Many more people have it far worse than Washington Post reporters. Our real unemployment (and underemployment) figures are far higher than what the government claims, even as the Obama Administration frantically imports millions more workers to take American jobs and welfare recipients dependent on taxpayer dollars.

Is any of this finally getting through to the besieged employees of the Washington Post? And if it can report so breathlessly on the economic threat to its own employees, might it spare a moment for the American workers who are struggling as a direct result of their own pro-immigration reporting?

Maybe it’s time for an extended feature at the Washington Post on the high cost of cheap labor.

After all, the ultimate price we pay for mass immigration is the loss of the country itself.