What do billionaire politicians do to keep busy when their terms in elected office end? One recently retired person, former Mayor Michael Bloomberg of New York City, is the newest active lobbyist for amnesty-legalization with work permits and doubling legal immigration.

It must be the cool billionaire thing to do, since Facebook founder Mark Zuckerberg has been a leading light, even though he is worth $19 billion.

Michael Bloomberg has a net worth of $31 billion yet he spends his presumably valuable time working to flood America with big-government third-worlders just to save a few bucks that he clearly doesn’t need or want.

It must be a country club solidarity thing. Memory-enhanced citizens might recall Bloomberg’s worry in 2006 that his golfing pals would suffer if illegal alien gardeners were deported: Bloomberg: Illegal immigrants help golfers.

Below, Bloomberg is particular about having top quality putting greens at the lowest possible cost. 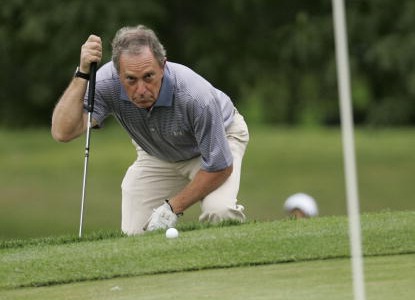 So these days, he aims to chat up fellow elite Republicans about the need for a firehose supply of exploitable foreigners, as the ruling class brushes away the concerns of the little citizens who still stubbornly cling to their Constitution, culture and sovereignty.

Former Mayor Michael R. Bloomberg of New York will be in Washington next Friday, along with members of the United States Chamber of Commerce and several prominent Republicans, to pressure Republican lawmakers to take up an overhaul of the nation’s immigration laws before the end of the current Congress.

The immigration summit, which will be Mr. Bloomberg’s first major public policy event since stepping down as mayor, is pegged to President Obama’s coming State of the Union address, in which he is likely to address problems with the country’s immigration system. The event’s organizers also hope to capitalize on momentum in the Republican-controlled House, where Speaker John A. Boehner and his leadership team are preparing to release a policy blueprint that is likely to include at least some path to legal status for the 11 million undocumented immigrants already in the country.

Other participants include Carlos Gutierrez, who was secretary of commerce under President George W. Bush and a founder of Republicans for Immigration Reform, a “super PAC”; Gov. Rick Snyder, Republican of Michigan; and Randy Johnson, senior vice president at the Chamber of Commerce.

The leaders plan to focus on the economic case for immigration reform, which they hope will be a compelling argument for Republican lawmakers — many of whom consider any overhaul that includes a path to legal status to be amnesty — to take home to their districts.

“If there was ever a notion that immigration reform was a progressive cause, that notion is clearly no longer true, because you see Republicans of all stripes understanding that immigration reform is essential to the country’s prosperity, to economic prosperity and certainly to the political prosperity of any national party,” said John Feinblatt, the chairman of the Partnership for a New American Economy, the immigration group that was founded by Mr. Bloomberg.

He added that Mr. Bloomberg’s willingness to use his first postmayoral trip to Washington to push for an immigration overhaul “is a clear signal of his passion for the issue and his intention to accelerate his support.”

The Chamber of Commerce echoed the economic pitch.

“Our nation must do a better job of extending opportunity to all, and immigration reform is essential to that effort,” said Thomas J. Donohue, president and chief executive of the Chamber. “It will add jobs, talent, innovation, investment and dynamism to our economy. We need to enact legislation that transforms our broken immigration system into one that drives stronger job creation and economic growth.”

At his annual State of American Business address this month, Mr. Donohue said changes to the nation’s immigration laws were an important part of expanding jobs and careers that will exist in the 21st century. “Why? Because throughout history immigrants have brought innovation, ideas and investments to American enterprise, and in terms of demographics, we need immigration,” he said.

An overhaul of the nation’s immigration laws passed the Senate with bipartisan support in June but stalled in the House, where many Republicans fear a primary fight from their more conservative base.

But an increasing number of prominent Republicans are coming forward to push for a bipartisan and comprehensive approach to the nation’s immigration laws. In Mr. Snyder’s State of the State address on Thursday, the governor said an open-arms immigration policy was “how we made our country great.”

“We need to encourage immigration in our state,” Mr. Snyder said. “We need to focus on legal immigration to make sure Michigan is the most welcoming place.”