Under the misleading label of “reform,” Republicans are eagerly backing a bill that will retroactively reduce prison sentences for criminal drug traffickers even as a drug epidemic sweeps the country. Many of those criminals who will be released are illegal immigrants. And much like “immigration reform,” the Sentencing Reform and Corrections Act of 2015 “reforms” the criminal justice system by breaking it.

The bill will cut sentences for drug felons in federal prison, including traffickers. According to a letter sent to Alabama Republican Sen. Jeff Sessions from the Federal Bureau of Prisons, a quarter of these traffickers are non-citizens. Likewise, 77 percent of inmates convicted on federal drug possession charges aren’t citizens. NumbersUSA characterizes the bill as nothing less than a prison break for illegal aliens:

There is no requirement in the legislation that Immigration and Customs Enforcement take custody of a criminal alien who is released and remove them from the United States, even when their conviction by current law should result in their immediate removal under current law.

[Current Prison Reform Bill Would Release Criminal Aliens into The U.S. (With No Deportations), by Chris Chmielenski, NumbersUSA, April 29, 2016]

It’s highly unlikely that the Obama administration, which has released tens of thousands of convicted criminal aliens onto U.S. streets, would rush to deport the newly-freed felons.

Illegal immigrant drug mules fuel cartels with drug profits, and the cartels in turn push more illegal immigrants into America. Cartels help illegals break into the U.S. for a price, which is often taking a backpack stuffed with heroin with them. [America’s Heroin Epidemic Fueled By Flood Of Illegal Immigrants, by Ethan Barton, The Daily Caller, September 14, 2015]. The Republican-controlled Congress, which voters sent to Washington to stop Obama’s unilateral Amnesty, already betrayed their constituents minutes after taking power by funding Obama’s unilateral and unconstitutional amnesty. [The 75 Republicans Who Voted To Fund Obama’s Amnesty, by Carmine Sabia, Bizpac Review, March 4, 2015] Now, Congressional Republicans want to take it a step further and provide even more benefits to foreigners whose entire lives are dedicated to harming Americans. 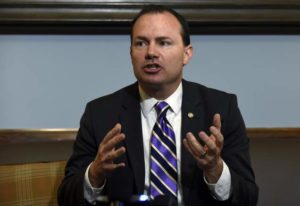 Supporters of the bill, like Utah Republican Sen. Mike Lee (right) preen about how this “reform” is a cost-saving measure that will save taxpayers a great deal of money while restoring “fairness” to sentencing. It’s difficult to see how flooding the courts with convicts petitioning for a retroactively-applied early release—with the help of taxpayer-funded lawyers—will cut costs. Lee wholeheartedly agrees with disparate impact theory: “To be effective, a criminal justice system must be seen as legitimate. And for too long our federal sentencing laws have required punishments that just don’t fit the crime” [Revised Sentencing Reform and Corrections Act Expands Bipartisan Support, By St. George’s News, May 2, 2016].

But how is the criminal justice system’s legitimacy at stake? To answer this is to reveal the deep-rooted motivations for why Republicans are willing to inadvertently inflict more addiction and death on their mostly white constituents.

As might be expected, the delusion of “minority outreach” is a crucial—if not the key—factor in the Republicans’ surrender. Like Rand Paul, Mike Lee has been a vocal proponents of sentencing reform for years because he thinks it will help Republicans win more minority votes. [Meet the GOP’s main man for minority outreach, by W. James Antle III, Daily Caller, March 2, 2014] Even after Rand’s run for president turned into a disaster, and after the rise of Donald Trump, such Republicans still seem to believe that by giving back voting rights to mostly black and Hispanic criminals, they will somehow win the minority vote.

But the reality is that whatever small number of freed criminals vote Republican, Democrats will overwhelmingly benefit from felons being freed from prison and being given voting rights. In fact, it’s precisely for this reason that Democratic Governor Terry McAuliffe unilaterally restored voting rights to 206,000 felons in the state of Virginia. [Virginia governor restores felon voting rights, Russia Today, April 22, 2016]

Those who push for sentencing reductions call attention to racial disparities—blaming the rules of a white-run society with European values such as law and order for the bad behavior of nonwhites.

“Many ostensibly race-neutral policies and laws have a disparate racial impact. Police policies such as ‘broken windows’ and stop, question, and frisk have disproportionately impacted young men of color,” the leftist  Sentencing Project frets. “Prosecutorial policies, such as plea bargain guidelines that disadvantage blacks and Latinos compound these disparities, as do sentencing laws that dictate harsher punishments for crimes for which people of color are disproportionately arrested.” [Black Lives Matter: Eliminating Racial Inequity in the Criminal Justice System, by Nazgol Ghandnoosh, The Sentencing Project, February 3, 2015]

But for all the talk of “disparate impact,” the plain fact is that a wildly disproportionate number of such offenders are black and Hispanic. According to the Bureau of Justice Statistics, nearly three-quarters of all drug offenders in federal prisons are black or Hispanic. [Drug Offenders in Federal Prison: Estimates of Characteristics Based on Linked Data, October 2015] Blacks deal primarily in crack cocaine, but Hispanics have branched out to powder cocaine, heroin, methamphetamines, and marijuana. Furthermore, 99.5 percent of these drug offenders are traffickers. [The Current Sentencing Reform and Corrections Act is Dangerous for America, by Sen. David Perdue, Medium.com, February 9, 2016]

Meanwhile, white deaths have shot up as mass immigration drives down social trust and fractures American society. Opioid overdoses facilitated by more efficient smuggling systems, alcohol poisoning, and liver disease are killing desperate blue collar whites who are lectured about “white privilege” even as they compete with immigrants for jobs and what jobs remain are outsourced.

Advocates of “reform” also tout hard cases, where a sympathetic-seeming offender is caught in the teeth of mandatory minimums. But why were these tough laws put on the books in the first place? Because nonwhite criminals committed such behavior as to make them necessary—liberal judges wanted to let them off with easy sentences until Americans pushed Congress to pass the mandatory minimums.

Heroin is a particularly terrible scourge. Once developed as less addictive and poisonous alternative to morphine, it actually is much stronger: It’s an “already-metabolized version of morphine” which “takes a more direct route to the brain than morphine itself”. [Heroin in the Brain: Its Chemistry and Its Effects, Frontline PBS] It alters the user’s brain chemistry, trapping addicts in a hell in which everything reminds them of getting high [Brain changes in an addict make it hard to resist heroin and similar drugs, by Brian Palmer, The Washington Post, February 17, 2014]. Worse still, the diminishing pleasure that comes with each successive hit — since such a powerful hit of dopamine will actually destroy those very pleasure receptors in the brain — requires more and more powerful doses to get users high.

Dealers have begun lacing heroin with additives including an opioid called fentanyl, which can be as 50 times stronger than heroin. It was heroin from Mexico—laced with fentanyl—that likely killed actor Phillip Seymour Hoffman in 2014. A DEA official said after his death that pure heroin is smuggled into distribution centers and processed for street sales with such additives, with 17 percent of all heroin seized by the agency coming from New York City. [Philip Seymour Hoffman death comes amid rise in heroin abuse, trafficking, by Steve Gorman, Reuters, February 3, 2014]  New York City is majority nonwhite and 28.8 percent Hispanic.

Just as tough laws might catch a few unlucky individuals, weaker laws will let many more dangerous, hardened criminals slip back into society to wreak more havoc. Adding millions more Mexicans into the equation while softening drug trafficking sentences is a recipe for destruction and misery for Americans.

But as the Trump phenomenon has shown, Americans won’t indefinitely support leaders determined to betray them. If the likes of Paul Ryan continue to act like defending their white constituents is morally shameful, the rank and file will turn to new leaders or just stay home.

If passed, the Sentencing Reform and Corrections Act of 2015 won’t just be a disaster for the county. It will be one more nail in the GOP’s coffin.