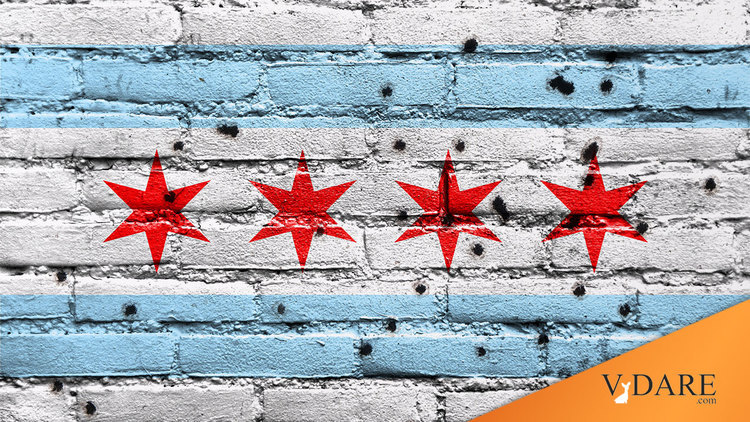 Mexican Drug Gangs Only Part Of “The War In Chicago”

The War In Chicago, the 48 Hours special with Maureen Maher and Armen Keteyian reporting that aired Saturday May 18, was a breakthrough—of sorts. It even had a logo that would make George Zimmerman blush: three hoodie-wearing thugs (eat your heart out, Trayvon Martin), one brandishing a gun, with a DEA Agent facing them. 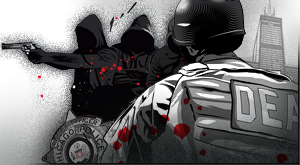 Strikingly, the report candidly admitted that the city’s drug problem—heroin—is almost entirely driven by Mexican cartels; that only 26 percent of the more than 500 homicides in 2012 had been solved; and that in wake of the murder of 15-year-old Hadiya Pendleton—you know, the black girl that Barack and Michelle Obama tried to make the face of the gun control movement—the police surge launched by the city to try to make the streets safer is already threatened by budget concerns:

But like many big cities, Chicago has serious budget problems. The extra police on the streets is costing the city millions. Can they afford to keep up the fight?

There are lines of demarcation in every city. For this uniquely American city, the death of Hadiya Pendleton may well be one of them. Since her murder on Jan. 29 in Chicago, the number of extra police on the streets has doubled to 400. Officers are working seven days a week, but this is a relative peace that comes with a price: an estimated $1 million a week in police overtime.

The CBS special quoted a 28-year veteran of the DEA, Jack Riley, as saying:

"We've got people dying ... and I'm not rolling over, I have not thrown the towel in," said Riley, who thinks he knows why so many of Chicago's children are dying.

… Riley says many Chicago shootings are carried out by the area's roughly 70,000 gang members who are going to war over one thing in particular: drugs

But one thing doesn’t ring true –“The War in Chicago” made this contradictory point:

Chicago is the gang capital of the United States. According to the Chicago Crime Commission, a 2012 Chicago Police Department gang audit found there are more than 600 gang factions in the city, with a minimum combined membership of 70,000. As the number of gangs in the city increase, it's difficult for gangs to control large areas. Instead, gangs cling to streets. Territory disputes mean increased rivalry and as a result, more shootings.

In 2011, a quarter of the 433 homicides in Chicago were gang-motivated according to Chicago Police Murder Analysis; 83 percent of all homicide victims died as a result of shootings.

But that means only 108 or 109 of the homicides in 2011 were “gang-related” i.e. due to drugs. (Update: in 2013 to date, HeyJackAss.com (a website devoted to “Illustrating Chicago Values” i. e. crime reports)  reports 101 people have been shot and killed in Chicago; 521 people shot in non-fatal shootings; there were 123 total homicides.)

Calls for tougher sentencing of epidemic flash mobs organized via social media have now being made by lawmakers in Illinois:

State Sen. Kwame Raoul, D-Chicago, said police told him that there had been an incident recently where a young woman was shot by a rival gang member after she posted a picture on Facebook that revealed where she was at the time.

Dropping enrollments in the Chicago Public School system, where out of 400,000 students, only eight percent are white, is forcing the mergers of schools, putting students in danger of having to walk through “rival gang” territory to class.

So instead of fighting fires, the Chicago Fire Department is being forced to escort these students to class—to keep them safe from “gangland activity” [Poli e, Fire Unions Raise Objections To School Safety Plan, by Dorothy Tucker, CBS Chicago,May 14, 2013].

“The War In Chicago,” CBS dubs it.

But the greater truth of the war in Chicago still escapes 48 Hours. As I have repeatedly noted on VDARE.com, [see Obama Returns To Chicago: Gun Control Utopia—Or Black Dystopia?; Aurora’s Dark Knight-Mare Just Another Weekend In Chicago], Chicago is America’s deadliest city courtesy of the community President Obama was once paid to organize.

Hunter Wallace of Occidental Dissent reminds us that, for the year 2010, in a city roughly 33 percent black, 32 percent white, and 28 percent Hispanic:

But it’s not because of America’s historic majority.

Paul Kersey[Email him] is the author of the blog SBPDL, and has published the books SBPDL Year One, Hollywood in Blackface and Escape From Detroit, and Opiate of America: College Football in Black and White. His latest book, Second City Confidential: The Black Experience in Chicagoland, will be published soon.