Come Back Hulk Hogan! All Is Forgiven…Maybe. How PC Is The WWE?

The "implicitly white" sport of pro wrestling's Wrestlemania 34 starts today. Everything is political in modern America. Thus musician Kid Rock has generated headlines by joking about wanting to “bodyslam some Democrats” when  inducted into the World Wrestling Entertainment (WWE) Hall of Fame [Kid Rock at WWE ceremony jokes: 'I just want to bodyslam some Democrats,' by Matt Durr, Michigan Live, April 7, 2018]. But the night’s most significant political event: a shout-out to a man the WW tried to send down the Memory Hole—the iconic Hulk Hogan, ensnared in a racial scandal some years ago. Now there’s speculation Hogan may return. The final showdown between “Hulkamania” i.e. what fans actually want, and Political Correctness i.e., what a global brand needs to do to placate Main Stream Media enforcers, may be at hand.

The WWE, despite its cartoon image, is politically key in the age of Trump. President Trump is friends with WWE head Vince McMahon and has a long history of hosting WWE events at his properties and participating in shows. Vince’s wife Linda, a disastrous RINO Senate candidate in Connecticut, is now Trump’s head of the Small Business Administration. Trump was inducted into WWE’s Hall of Fame in 2013—his five minute speech there showed his ability to control even a hostile crowd. 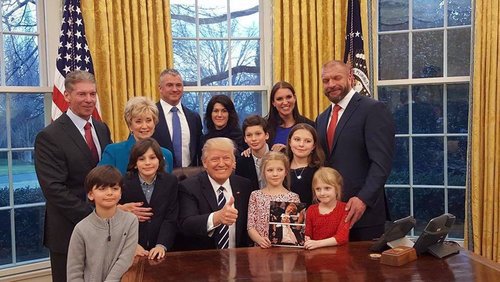 [WWE Hall of Fame 2013: Reaction, Analysis and Review, By Mike Chiari, BleacherReport, April 7, 2013]Trump returned the honor by hosting the McMahons at the Oval Office when WWE co-founder Linda McMahon was being sworn in.  [Vince, Stephanie & Shane McMahon Take Photo With President Trump in the Oval Office,Heavy.com, Feb 15, 2017]. The WWE’s stock is booming and Vince McMahon is even bringing back the XFL, his football league [Here's Why WWE Stock Is Soaring, by Wayne Duggan, USNews.com, January 26, 2018].

Yet there’s a shadow over the company—as there was over the ceremony. Terry Bollea, better known as Hulk Hogan, was the WWE’s most iconic star. But WWE dumped him in 2015 after a tape recording leaked to the press, the aftermath of an adulterous encounter, which included him saying the N-word and speaking disparagingly of blacks (including his daughter’s boyfriend). I covered this at the time in PC Stronger Than Hulkamania… For Now.

As revealed in Ryan Holiday’s  recently released book, Conspiracy: Peter Thiel, Hulk Hogan, Gawker, and the Anatomy of Intrigue, the leak came about because of Hulk Hogan’s “invasion-of-privacy” lawsuit against Gawker. Hogan was warned the release of the tape would likely be a consequence of the lawsuit. But he proceeded anyway.

As chronicled in Conspiracy, the aftermath for Hogan was disastrous:

Hogan’s family is mortified. He is kicked out of the WWE Hall of Fame. He loses the rest of his endorsements. People had been disappointed in the sex tape, but here—here they were disgusted. The shoes Gawker had walked a thousand miles in were now on other feet, and their wearer was just as disgusted with himself as everyone else was— because he knew they were right to be. It was the worst thing he'd ever done, ever said. 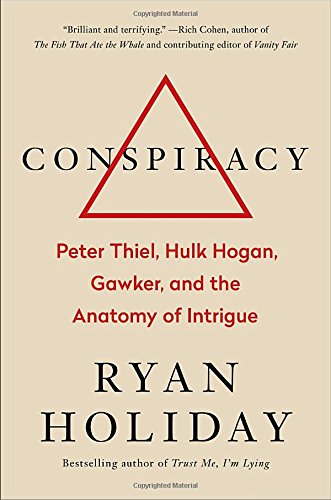 There was nothing he could do to take back those words.

[Attorney Charles] Harder had warned Hogan that these comments might come out. Hogan had proceeded anyway, telling himself that it didn't matter. “I knew it was coming. I knew what would happen if I kept pushing, but no, I just couldn't walk away.” He wanted to win so badly he thought it worth the risk. But that had been theoretical.

Hogan, disowned by all his allies and friends, losing his remaining income, exposed and vulnerable for a second time, should have had to quit. Except it didn’t quite go that way… There is one upside to losing it all. What is it? At least for a conspirator, now you have nothing left to lose.

The resulting takedown of Gawker was gratifying to many conservatives. Yet Hogan’s reputation was so tarnished the WWE wiped Hogan’s entire history off its website—because he had used the N-word in a private conversation during the most intimate of situations.

Using the N-word is close to the worst thing you can do in modern America. In terms of public relations, it’s worse than murder. Thus a black suspect recently argued that he was justified in murdering a (Hispanic) woman because she allegedly used the term—and the Washington Post gave him sympathetic coverage. [Killing Someone Over A Racial Slur Is Still Murder, by Scott Greer, Daily Caller, April 4, 2018]

Maybe this was a test run by the WWE. There are rumors Hogan could return to WWE and talks are taking place, including about “how he can help others learn from his mistakes” [Report: WWE in talks with Hulk Hogan about returning to the company, by Tommy Messano, CageSideSeats, March 22, 2018]. 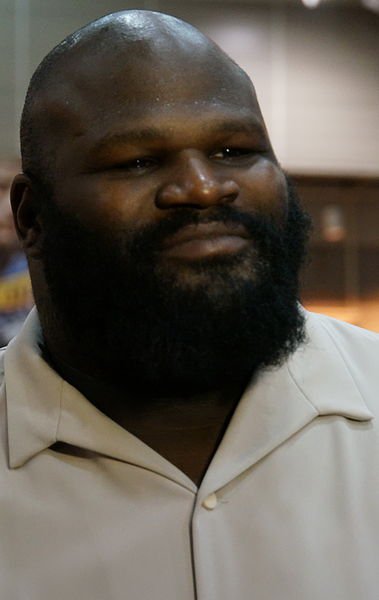 Still, black wrestler Mark Henry warned that if Hogan did return, there would be certain conditions demanded by “the delegation.”

What is “the delegation?” Henry explains:

“The delegation is pretty much all of the more established African-American wrestlers in the country and in the world, for that matter. Every promotion... there’s not a wrestling promotion that doesn’t house someone from the delegation.”

And like black students at a university after a racially charged incident, “the delegation” wants more money, set-asides, and an ideological profession of faith.

As Henry put it:

”There’s gonna have to be more community service and outside work. Support for programs and even creative programs that deal with diversity in the workplace. ... I don’t process everything like everybody else. I believe that everybody should be given a second chance but I also believe that you have to own your issue, whatever that issue is. You gotta try to make closure on everybody else’s behalf, not just yours.”

Even in professional wrestling, non-whites organize for their interests on racial lines.

This development is particularly fascinating because the WWE is moving aggressively to become a global brand—including in the Islamic world [Saudi Arabia signs 10-year contract with WWE, Al Arabiya, March 1, 2018].

As part of this, the WWE is making whatever changes its Muslim hosts require. At a recent event in the United Arab Emirates, female wrestlers competed fully clothed rather than in the usual revealing outfits.  [WWE’s Sasha Banks and Alexa Bliss wrestle fully clothed in Abu Dhabi in first ever women’s match in United Arab Emirates, by John Hutchinson, The [U.K.] Sun, December 8, 2017]

Below, Alexa Bliss as she appears in (a) the US and (B) Saudi Arabia. 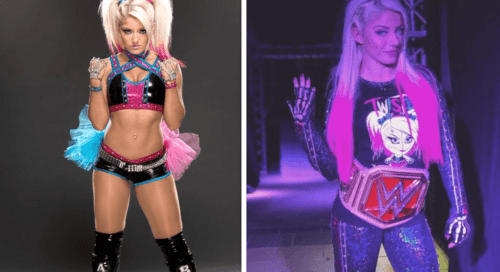 And for the first event to be held in Saudi Arabia, there Bwill be no female wrestlers at all, as “female sport participation in public is not allowed” [WWE blasted by supporters after putting all titles on line for strict Saudi Arabia mega-show… apart from women’s belts, by Gary Stonehouse, The Sun, March 19, 2018].

But as usual with Islamic intimidation, Western feminists and other liberal protesters seem uniformly silent.

In an apparent paradox, WWE is promoting the “women’s revolution” as part of its marketing [WWE's Stephanie McMahon on the women's wrestling revolution, women's Royal Rumble and Monday Night Raw, by Brad Lewis, Newshub, January 1, 2018].

Needless to say, if Hulk Hogan returns, this silence will not endure. Even if he grovels more than he already has, the WWE will still draw protests.

Such are the problems of a being a “global brand”: non-whites can organize openly for their interests on racial lines; autocratic kingdoms can enforce their repressive rules: but the man who turned the company into a worldwide phenomenon is still a non-person because of a word uttered in private.

Like the election of President Trump, the return of Hulk Hogan would be a key test of the power of Political Correctness.

Hogan’s return would be a powerful message to corporate America that defying Political Correctness isn’t just moral, but profitable.

And if the recent Hall of Fame show is any indication, he’ll be met with thunderous cheers.

If a social media campaign takes off, something like using the hashtag #BringBackHulkHogan with tweets to @WWE and @HulkHogan, it may even happen.