Border Patrol Agent's Murder in Rio Grande Valley: 'This Is Coming to a Town Near You' 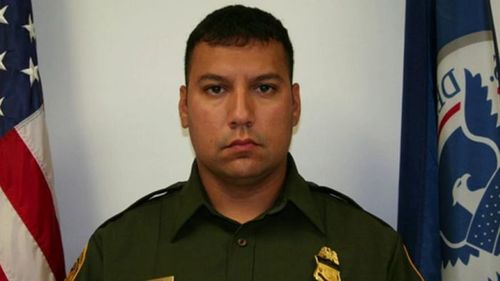 The voice on the other end of the line is exasperated. "It's insane," he wants America to know. "We're in a war zone." And there's no room for apathy.

"This is coming to a town near you," he warns.

The man on the phone is a veteran of the Department of Homeland Security who works in South Texas. He reached out to me Monday night in the wake of an off-duty U.S. Border Patrol agent's horrific murder on Sunday. The 36-year-old agent, Javier Vega Jr., was shot execution-style in front of his wife, his parents, two of his sons and another child in the Rio Grande Valley. Vega's father was also shot but survived. They were on an idyllic family fishing trip before being robbed and ambushed.

The two suspects are Mexican nationals from Matamoros. "They're here illegally," my source said with a weary sigh. And not just that. They had been previously deported after committing other serious crimes, he says. "But we just drop the thugs off at the border, and they come right back."

The National Border Patrol Council issued a moving statement after a middle-of-the-night manhunt led to the capture and confessions of the two suspects this weekend:

The White House and U.S. Chamber of Commerce may not speak up, but the NBPC gave the law enforcement officers on the border their just recognition:

"We want to commend the Border Patrol agents and other law enforcement officers involved in the manhunt for Agent Vega's killers. It is through their professionalism and tenacity that the wretched animals who committed this crime will face the full measure of Texas justice."

No doubt the bleeding hearts will take offense at wretched animals being called what they are. I can hear "progressives" whipping out their overdrawn race cards as I type. That's all they've got.

So, public safety and homeland security concerns are "insignificant"? More than a half-million border crossers from Mexico, South America and Central America granted administrative amnesty or special border-surge status under Obama are "our children"? Where are the speeches from Pelosi and her fellow House Democrats on behalf of the children of Javier Vega? And for the children of other fallen agents? Or for the children of countless other victims nationwide murdered by criminals who waltzed across the borders with impunity?

And where's the compassion for the men and women trying to do the job big business and big government don't want done?

The men and women sworn to provide border security — instead of just talking about it — don't have time for Washington games and politically correct niceties. "A lot of politicians come down here," my DHS correspondent says. "They talk about securing the border, but they leave us with our hands tied." He shares his experiences patrolling vast swaths of the Rio Grande Valley with no backup. He talks about wasted resources and the deportation charade. "They get their papers served, and then they just disappear."

Both parties are to blame for the endless cycle of amnesty, catch and release, and bloodshed, he tells me. The latest border surge, catalyzed by Obama's systemic nonenforcement and bipartisan-enabled benefits magnets, keeps DHS first responders overwhelmed by design.

"They keep doing the same thing over and over again," he points out, "and it doesn't work." Immigration "reform" doesn't require hundreds of pages of new legislation, new waivers, new employment permits, more lawyers or visa expansion programs. It starts and ends with this:

Stop pouring fuel on the border chaos fire, and let our forces on the front lines do their damned jobs.

I tell my DHS correspondent "thank you" and share my prayers for his safety. He hangs up and gets back to his work — or as much of it as the politicians in Washington will allow him to do.