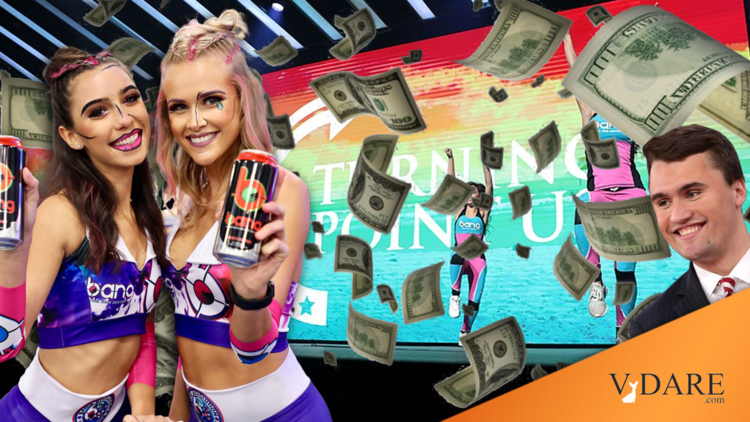 "Bang Girls," No Immigration Patriotism—Is This The End For TPUSA’s Celebrity Conservatism?

Earlier, by James Kirkpatrick: The Altered Presidential Seal And The Farce Of Turning Point USA

While conservative values wither and die each day in America, Turning Point USA parties. By now, many have seen the video circulating around Twitter of Bang Energy drink girls, in tight yoga pants with their midriffs showing, shooting money out of a cannon into a crowd of excited teenagers. (Last year they shot t-shirts) [Conservatives slam Turning Point USA event for using 'Bang Girls' to blast free cash at teenagers from cannons, Daily Mail, December 21, 2020].

Turning Point USA sponsor "Bang Energy" continued to shoot money out of a cannon throughout their 25-minute sales pitch to attendees - urging TPUSA activists to buy their product. pic.twitter.com/KOB9bQwpnN

If you didn’t know better, you could think this was a Las Vegas club. But no, it was the TPUSA Student Action Summit, in West Palm Beach, Florida, hosted for young conservatives between the ages of 15 and 25. It has worked—kids just want to have fun—but for how much longer?

TPUSA is considered one of the biggest, and certainly most well-connected, conservative organizations around. TPUSA’s most recent tax filing ending in the fiscal year 2019 shows the group brought in nearly $29 million in total revenue, up from only approximately $11 million the prior year. Charlie Kirk, age 27, the founder and conservative wunderkind, has a listed salary just shy of $300,000—still short of the $425, 000 Cuckservative Review Editor Rich Lowry reportedly earns.

Despite TPUSA’s gigantic budget, the SAS event still featured the segment by sponsor Bang Energy, in which conference-goers who regularly decry getting free money, were showered in… free money by “Bang girls.” (Last year, it was t-shirts). Before this partnership, TPUSA did a feature on Bang as part of its “Only in America” series.

Only in America, the video suggests, can you surround yourself in scantily clad models, prepped by your wife on how to be cheerleaders, while trying to promote yourself as a friend of conservatives and a devout Christian man.

The Bang Energy sponsorship is symptomatic of what TPUSA is as an organization. TPUSA tries to sell young people a vapid image of conservatism, focused on flashy materialism, rather than any sort of actual conservative principles. In short, TPUSA is focused on trying to give young people the lifestyle you can only find on reality TV, while promising that is one of the merits of capitalism.

Take a look no further than TPUSA’s POPlitics show. Previously a laughingstock on YouTube to the point where the videos are now unlisted, the show now only has a presence on Instagram, a website meant for nothing more substantive than photos. The show features Alex Clark, an advocate for getting Botox and plastic surgery while in your 20s and a lover of photos captioned with irrelevant comments about America, talking about the pop culture issues of the day. The show talks about the “conserva-tea” of the day and fans are called “cuteservatives.”

The show is best summarized by its promo, in which Clark yells, "What would it look like if Fox News and E! News had a baby? Me!"

In fact, before Clark was hired by TPUSA, she was a star on the “Bachelor”-esque celebrity dating show, FOX’s “Coupled.” One of the promo shots for the dating show featured Clark in a candle-lit bathtub making out with her co-star and partner on the show, a black male model. At the time of the show, she was recorded as having called herself “100% bangable,” because of her devotion to skin care and plastic surgery.

As you can tell, all of this is very conservative!

Clark is not the only reality TV star that got picked up by TPUSA. Rob Smith, who calls himself “America’s Favorite Black, Gay Republican,” was once a reality TV star. And, like Clark, he was on a television show about his personal relationship. Smith was on Paramount Network’s “Marriage Rescue.” According to Smith, (who appears to have blocked VDARE.com on Twitter, although we’ve never written or tweeted about him), he “did the show because it was important for me to show that gay marriages have the same issues as all other marriages!”

In 2012, as a HuffPost contributor, Smith tried to create the “I am Trayvon Martin Project,” with people following his lead by contributing videos about how they, too, are just like Martin. As recently as in 2017, Smith was described as a contributor to the gay news site Queerty, which ran an article about his wedding photos (his byline called him an editor). In 2014, he called it the best website he had ever written for. Some of his articles during his tenure at Queerty were “Most Awesome Mom Ever Creates Tinder Profiles For Her Gay Sons” and “Iconic Children’s Book Characters ‘Frog and Toad’ Were Totally Gay.” In 2014, Smith used his column in Queerty to promote his own memoir. Like Clark, Smith said in 2014 that he writes for Queerty because of his love for pop culture.

If you just support TPUSA, you, too, can schmooze with some of the biggest names in conservatism and see shining examples of the influencers that you, too, can one day become. TPUSA conferences are meant to give supporters a taste of luxury, of the kind of life they can achieve if they just stay loyal to the TPUSA brand and to Charlie Kirk.

In 2019, the winter gala was hosted at Mar-a-Lago, with sponsorships going up to $100,000. The $100,000 sponsorship would allow people to meet not only Kirk, but other “special guests.” The 2017 SAS conference was marred by some of the reporting on the debauchery that occurred by those attempting to live the high life:

By all accounts, the 2017 Student Action Summit hosted last December by conservative college organization Turning Point USA was boisterous. During the day, more than 1,200 high school and college kids listened to speeches by big names like Ben Shapiro, Donald Trump, Jr., and Tomi Lahren. By night, some of those same students got blackout drunk.

Witnesses describe a scene reminiscent of "Animal House." Kids weren’t just drinking in their hotel rooms. They say some wandered drunk through the lobby. Students weren’t just roughhousing by the hotel pool. They say some were wasted in the water. And while many of the young conservatives proved a temperate bunch, the vomit in the bushes served as visceral testament to the appetites of the rest.

More than just access to cool parties and the ability to say you went to Mar-a-Lago, people are loyal to the TPUSA brand: you, too, can aspire to have your book promoted by the likes of President Trump and Don Jr. If you stray away and start associating with some of Kirk’s rivals, your fall from conservative grace will be swift. Kirk will make sure of it [Turning Point USA ‘brand ambassador’ dumped after photo with white nationalists and anti-Semites surfaces, by Carlin Becker, Washington Examiner,  October 01, 2019].

When it comes to a coherent conservative political ideology, TPUSA’s positions are dependent on donor preferences, Kirk’s personal views at the time—and the amount of backlash he’s receiving from the right. In November 2019, Tucker Carlson used his Fox News platform to criticize Kirk for his position in favor of H-1B visas. In his segment, Tucker paraphrased one of Kirk’s statements, about wanting to “staple a green card to their diploma” (Kirk’s actual quote at the time was “If you graduate from a United States university, with a skill, upon graduation, on your diploma, we should staple a green card behind your diploma”).

building the wall as a first priority; ending birthright citizenship; establishing English as the official language of the United States; ending chain migration and the visa lottery; lowering overall legal immigration levels; and dramatically increasing enforcement of E-Verify and visa overstays [Clearing the Air on the Right, by Charlie Kirk, American Greatness, November 21, 2019].

This appears to still be Kirk’s position, judging by one of his recent tweets, for what that’s worth.  (Kirk’s Twitter account is reportedly run by an underling, but whoever he is, he’s pretty good. Hope this doesn’t get him fired!)

In his American Greatness piece, Kirk even correctly noted that many in the conservative base now feel betrayed by President Ronald Reagan over Amnesty. This is in striking contrast to how many conservatives, and especially the Beltway Right, have now bestowed sainthood on Reagan (disregarding how hard their forebears fought against him at the time).

TPUSA still posts Reagan content on social media, although seemingly less often than before. In general, Kirk now regularly espouses positions that he would’ve previously condemned and blacklisted fellow conservatives over… if the views are popular enough. Thus in one video during Black Lives Matter rioting, Kirk said:

In his American Greatness piece, Kirk also mentioned being smeared by the Southern Poverty Law Center.

This, however, has not stopped TPUSA from campaigning against political rivals if they’re deemed racist by the SPLCs of the world—or even their own TPUSA ambassadors if they’re seen hanging out with those supposed so-called racists.

Kirk’s fear of being called racist may also be why, in his American Greatness piece, he also wrote on immigration:

While I vehemently reject the notion that the melanin content in someone’s skin determines their views and voting patterns, it’s plain that culture plays a significant role at the ballot box.

And he went on to make the standard cuckservative obeisance to the Leftist ideological hegemons:

This means conservatives must do a better job winning over minority voters of all varieties—both native- and foreign-born.

Of course, what it actually means is that GOP/ GAP should fight for an immigration moratorium. But donors don’t like that. I saw no mention of immigration reduction at this year's TPUSA summit.

While American values are continuously under assault, and conservatives are constantly banned, censored, and canceled, Kirk’s brand of conservatism is focused on trying to make the next “stars” of the conservative movement. A glance at TPUSA’s social media shows quotes from nobodies who TPUSA is desperately trying to turn into “influencers” —as if being an influencer is a career path.

In fact, TPUSA even has its own “Influencer Media” program to do just that: turn people into influencers. The program boasts the average number of social media followers per TPUSA influencer, as if a measure of the success of conservative values is how many people follow girls who post bikini photos. 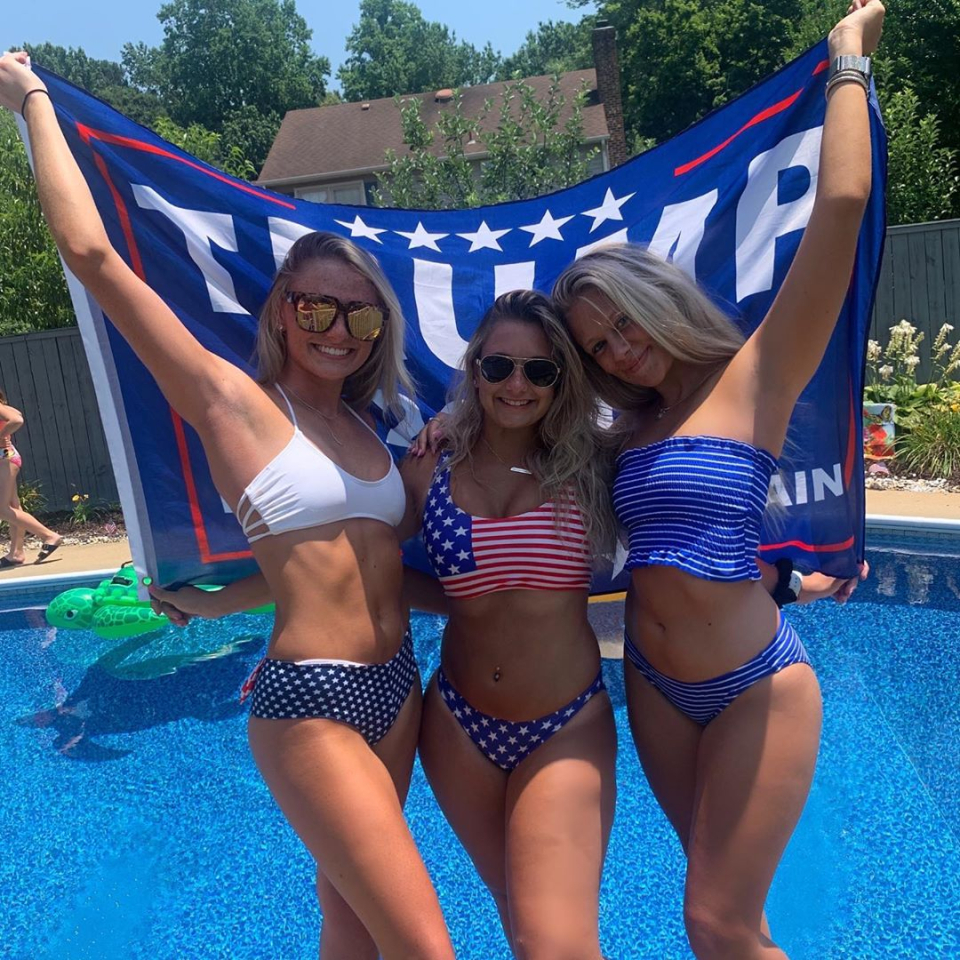 [TRUMP TRAIN RIDES AGAIN Students4Trump supporters strip down to their bikinis to back president as others pose with flags and GUNS, by Nicole Darrah, The Sun, July 21 2020]

Rather than advocating for conservative principles, TPUSA wraps up its ideology in a few “gotcha” words alongside funny faces. It seems that the TPUSA brand of conservatism is nothing more than claiming capitalism—not socialism—is the reason why 20-somethings like themselves can go out in party and post Instagram photos telling their hundreds of thousands of followers to buy this tea.

Will TPUSA’s recent SAS conference have been the group’s one big last hoorah—before the celebrity lifestyle brand of conservatism finally meets its end?

Rosa Luxemburg [Email her] is a philosopher who supports political dissidents and freedom of speech for all.