“Atmosphere Of Hate"—How Come Liberals Get To Call For Trump’s Assassination? 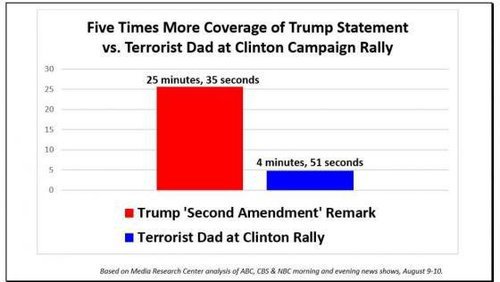 The liberal media hate, despise, and fear Donald Trump. Never in my lifetime have I seen such an outpouring of malice for one man. Not even the height of the Nixon impeachment crisis saw such vindictive passion. The press has lost any pretense of objectivity, and even a few “journalists” recognize this. As Jim Rutenberg [Tweet him] writes in the New York Times:

If you’re a working journalist and you believe that Donald J. Trump is a demagogue playing to the nation’s worst racist and nationalistic tendencies, that he cozies up to anti-American dictators and that he would be dangerous with control of the United States nuclear codes, how the heck are you supposed to cover him? Because if you believe all of those things, you have to throw out the textbook American journalism has been using for the better part of the past half-century… [Trump Is Testing the Norms of Objectivity in Journalism, August 7, 2016]

In other words, you take sides.

The Huffington Post never pretended to do anything but take sides. In July 2015, it stopped covering Donald Trump as politics and put him in the entertainment section. Five month later it put him back in politics, calling him “an ugly and dangerous force in American politics.” Now, every story about him ends with this astonishing “editor’s note:”

Donald Trump regularly incites political violence and is a serial liar, rampant xenophobe, racist, misogynist and birther who has repeatedly pledged to ban all Muslims ― 1.6 billion members of an entire religion ― from entering the U.S. [Links in original]

Something this crude may be without precedent in modern American journalism, but at least Huffington Post is open about its hatreds.

The New Yorker hates him just as much, but tries to be a little more refined. Like the rest of the media, it shrieked when Mr. Trump talked about defenders of the Second Amendment at a rally on Tuesday: “If she [Hillary] gets to pick her judges, nothing you can do, folks. Although, the Second Amendment people—maybe there is, I don’t know.”

Mr. Trump says he meant that gun-rights groups could organize to block appointments, but Evan Osnos [Email him] of the New Yorker knows better. He helpfully explained that the Republican candidate was suggesting that gun owners “would turn to violence because their favored candidate loses an election.” Mr. Osnos has been flailing ignorantly at Mr. Trump for more than a year. In an earlier article he wrote that Mr. Trump is “expanding the discourse of hate,” his core supporters are “the portion of the electorate that is drifting deeper into unreality,” he appeals directly to “crude tribalism,” and that he could unleash “anti-democratic politics” [“The Fearful and the Frustrated” August 31, 2015]

Hatred breeds hysteria. In this latest attack, Mr. Osnos worries that “we do not know if Trump’s remark actually endangered Clinton” but he approvingly quotes an Israeli journalist who says, “Many Republicans conveniently ignore the fact that words can kill.” He adds that “even joking about attacking a President or a federal judge is grounds for federal investigation,” and hopes “the legal system will hold him [Trump] responsible for flirting with that prospect” [Why Gun Owners Should Reject Trump’s Call to “Second Amendment People”, August 9, 2016]

Mr. Osnos—a Harvard graduate DC-dweller who drives a late-model Mercedes Benz—concludes with advice for gun owners: They should turn on Mr. Trump because he is giving them a bad name. A congenital defect of liberals is not to see how ridiculous they are.

He names the Trump-related disorder: "what I came to think of as usurpation anxiety syndrome,” that is to say, those degenerates who like the country they grew up in and don’t want to give it away to strangers. Mr. Saunders elaborates:

From the beginning, America has been of two minds about the Other. One mind says, Be suspicious of it, dominate it, deport it, exploit it, enslave it, kill it as needed. The other mind denies that there can be any such thing as the Other, in the face of the claim that all are created equal. The first mind has always held violence nearby, to use as needed, and that violence has infused everything we do—our entertainments, our sex, our schools, our ads, our jokes, our view of the earth itself, somehow even our food.

Needless to say, Mr. Trump is paving the way for violence against the Other, and he even likes overcooked steak and McDonald’s. And since Thomas Jefferson taught us there is no such thing as the Other, it make no difference if the country turns Mexican or Muslim or Buddhist or Pygmy.

But Mr. Saunders completely loses his grip when he talks about the deeper meaning of Mr. Trump’s popularity: “I’ve never before imagined America as fragile, as an experiment that could, within my very lifetime, fail. But I imagine it that way now.”

Mr. Saunders is actually telling us that if Americans vote for Donald Trump “the American experiment” could fail. If the rest of us don’t vote the way he tells us to, it’s all over. It is hard to think of a purer expression of contempt for the millions of his fellow citizens who will vote Trump.

The venom runs wide and deep.

(Not so fast, says history professor Roger Griffin: “You can be a total xenophobic racist male chauvinist bastard and still not be a fascist.”)

I’m used to this howling about “bigotry.” It’s all the Left (and a lot of the Right) knows how to do when anyone punctures their fantasies.

But what makes Mr. Trump a “threat to democracy?” He is the Republican nominee because the voters liked him better than the 16 other candidates. Isn’t that democracy?

All this breathless concern about “democracy” shows how little our rulers and their media flacks like it. They are willing to consult the people so long as the people behave, but if the people vote for “bigots” then democracy itself is under threat. What swine! It’s not democracy; it’s their threadbare dogmas that are under threat. Are they really too stupid to see the difference?

When the people get frisky and pass ballot initiatives to ban homosexual marriage, stop handouts for immigrants, or clamp down on illegals, a federal judge will correct their childish errors. There is not yet any precedent for judges to step in when the people elect the wrong president, but I suspect the Trump-haters are scheming to have the Supreme Court save “democracy” in a pinch.

There may be another solution. In January, the Huffington Post—the people who warn us after every article about Donald Trump that he “incites political violence”—ran an article explaining that violence is the solution if that’s what it takes to stop him. He is “ushering in a new era of fascist politics in the United States,” so “there’s an inherent value in forestalling Trump’s normalization. Violent resistance accomplishes this”. [Sorry Liberals, A Violent Response To Trump Is As Logical As Any, By Jesse Benn, June 6, 2016]

Last October, the New York Times Magazine asked its on-line readers if, were it possible to travel back in time, they would kill baby Hitler. No fewer than 42 percent said they would, and 28 percent weren’t sure.

These readers are no doubt Second Amendment skeptics, champions of tolerance, devotees of diversity, and good little Democrats who believe Donald Trump is a baby Hitler.

Let’s go back to the New Yorker’s Evan Osnos. If words can kill, and he really thinks Mr. Trump’s words could put gunmen on Mrs. Clinton’s trail, he should look in the mirror: He and scores of others have written so viciously about Mr. Trump that if ever an “atmosphere of hate” could provoke violence, this is it.

Mr. Osnos and scores of other Trump-haters are stoking frenzy in a way that virtually cries out for assassination.

Spare us, Mr. Osnos, your pious worries about Hillary’s health.