Naughty Thought No. 1: The violence is exciting. Responsible sorts are supposed to condemn it all 'round. A recent non-responsible sort, Jesse Benn, is making Twitter waves with this column

My latest @HuffPostPol: "Sorry Liberals, A Violent Response To #Trump Is As Logical As Any"#SanJose#TrumpRallyhttps://t.co/LpmJ1sx0q8

Boiled to a defensible essence, it's that when it really matters, getting physical is, if not good, understandable. Which is a far less controversial point than the responsible sorts out there clasping their hands to their mouths would admit. Nobody finds the U.S. military to be controversial, as Benn notes, and it stands ready to kick ass on command. Nobody condemns the violence of the American revolution, since, you know, we won that one. A little blood refreshes the tree of liberty, and so on.

Violence marks a turning point. It shows that someone's serious about something.

It's just that Benn and I come from diametrically opposed notions of who's oppressed in America and Europe.

What the current violence shows is that this election is about the really reals: the (shrinking) historic, traditional white majority vs. the (expanding) non-white, Muslim-sympathizing, illegal alien minority. The violent anti-Trumpers are sensing this thing perfectly.

The anti-Trumpers live in a society rigged to feed them goodies the pro-Trumpers worked hard to make. It's proposed this be taken away. Yep, that'll make 'em mad.

Naughty Thought No. 2: Of course, for election purposes, anti-Trump violence is manna from heaven. The actually physical suffering is of course regrettable, and a death would be more so. But it's not scaring any Trump supporters away—it's emboldening them. The will to vote this fall is hardening into steel.

Watch for very long lines of whites standing in lines at the poll with their arms folded across their chests. 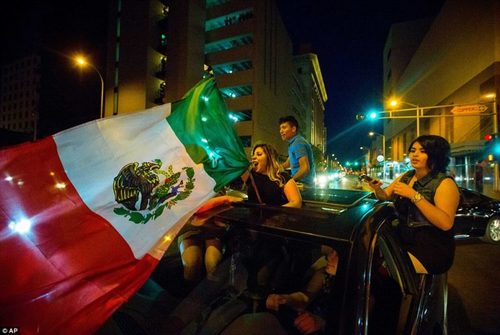 An effective Trump ad would simply feature 30 seconds of anti-Trump violence, making sure to include a protestor waving the Mexican flag.

Naughty Thought No. 3: Is anybody really worried that left-wing violence will beat right-wing violence? Historically, when this happens, it's within intra-ethnic settings. Non-white violence in America — right up to this weekend's massacre in Orlando — is fearsome but sporadic, unorganized and unsustained. Right-wing resistance would be organized and sustained. "Trump militias" would probably have a Hispanic American citizen or two, which would of course make the white men feel a little more comfortable.