In 1992, Bill Clinton famously denounced Sister Souljah, a rapper/activist who endorsed the anti-white violence in the LA Riots on the grounds that “if black people kill black people every day, why not have a week and kill white people?” Clinton retorted, “If you took the words 'white' and 'black,' and you reversed them, you might think David Duke was giving that speech.”

Of course, this is unfair to Duke. David Duke never suggested that whites go out and kill blacks. Still, Clinton’s disavowal of Sistah Souljah now represents the quintessential triangulation tactic, as politicians appeal to the Center by attacking their extremist supporters. Trump has not had such a moment. While cuckservatives like Matt Lewis once hoped they could create their own "Sistah Souljah moment" by attacking Trump, Trump is now the presumptive Republican nominee. [Donald Trump As A ‘Sister Souljah Moment,’ by Matt Lewis, Daily Caller, July 9, 2015]

Coincidentally, the Main Stream Media created an artificial scandal because Trump supposedly didn’t disavow David Duke frequently enough. As I previously explained, Duke has no connection whatever to Trump, in contrast to Obama’s intimidate connection with figures like Jeremiah Wright or Bill Ayers. And even Clinton was more directly connected with Sistah Souljah than Trump is to Duke.

Clinton did not choose Sister Souljah as his foil out of thin air. She was speaking at Jesse Jackson’s Rainbow Coalition meeting alongside Bill Clinton, where he made the remarks. [Democrats; Clinton at Jackson Meeting: Warmth, and Some Friction, by Gwen Ifill, New York Times, June 14, 1992]

Imagine if David Duke was speaking at the same conference as Donald Trump. Suppose Trump criticized Duke’s rhetoric at the conference. We all know the headline would not be “Donald Trump gives harsh rebuke to David Duke” but “Donald Trump addresses Klan Rally.” 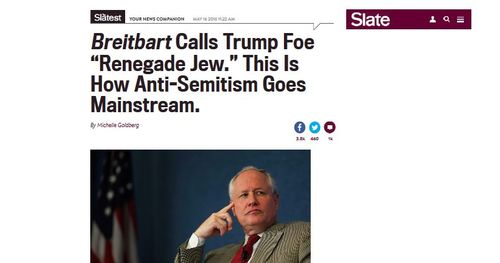 Despite the MSM’s best efforts, the David Duke smears failed to dent Trump. The MSM similarly ran dozens of pieces over Donald Trump’s son giving an interview with James Edwards's Political Cesspool. They tried to create a scandal because Jewish conservative David Horowitz, who has nothing to do with the Trump campaign, criticized Bill Kristol. This, we were told was proof of “anti-Semitism.”

None of this worked. Yet far from being discouraged, the MSM is now claiming Trump is responsible for every anonymous Twitter account which says something which makes a journalist sad.

[A]s a public political matter, at least until the Trump campaign, anti-Semitism was largely and increasingly marginalized on the mainstream conservative right. This was in significant part due to the efforts of the late William F. Buckley, who throughout his career made an effort to rid conservatism of its anti-Semitic fringe, including such former allies as Patrick Buchanan and Joseph Sobran.

Let’s accept for the sake of argument Buchanan and Sobran were evil anti-Semites who Buckley successfully purged. (For the record: they were not). But they were undoubtedly major figures at the time. Buchanan was (and is) one of the best-known conservative commentators and a leading candidate for the Republican nomination after Buckley turned on him. Sobran, who died in 2010, was one of the most popular conservative columnists at National Review.

In contrast, having run out of even marginally prominent wrong-thinkers, the MSM is now demanding Donald Trump disavow a list of anonymous Twitter supporters. It seems Trump cannot be President unless he personally issues a fiery condemnation of “Jared Taylor Swift,” and “Jazzhands McFeels.”

While the MSM has always whined about Trump’s Twitter supporters, the campaign intensified after Jewish reporter Julia Ioffe wrote a tabloid style hit piece on Melania Trump. [Melania Trump on her rise, her family secrets, and her true political views, GQ, April 27, 2016] While Ioffe poses as a serious journalist, she dug up stories about Melania’s father’s first marriage and speculated about whether she had plastic surgery.

Melania Trump spoke out against the story and many Trump fans responded with insults, including photoshopping Ioffe’s face onto an image of a prisoner in a Nazi concentration camp, with the caption “Julia Ioffe at Camp Trump.” Ioffe complained about this abuse and dozens of her journalist friends wrung their hands about this terrible slight.

When DuJour magazine asked Melania Trump about it, she responded, “I don’t control my fans, but I don’t agree with what they’re doing. I understand what you mean, but there are people out there who maybe went too far. She provoked them”. [Melania Trump: Writer of GQ profile ‘provoked’ vile, anti-Semitic attackers, by Erik Wemple, Washington Post, May 17, 2016]

But Melania and her family were victims of Ioffe’s hatchet job.

Imagine if a white journalist wrote a hit piece on Michelle Obama’s family and some anonymous Black Twitter accounts called the author a honky or joked about wanting Robert Mugabe to kill them. Would anyone demand that Michelle Obama is in anyway responsible for these anonymous Twitter accounts and needs to apologize to the journalist who smeared her?

However, because Melania is an attractive white woman married to Donald Trump and Ioffe is a Left-wing Jewish journalist, the Narrative is already set. We know who is Oppressor and who is Victim.

Jonathan Weissman, Deputy Washington Editor for The New York Times and supposedly responsible for creating unbiased news rather than editorializing, responded with tweets like:

He received a few mean Tweets and attempted to shame Jewish Trump supporters into denouncing him.

Flabbergasted that antisemitism in the Trump voter ranks isn't getting more attention, at least from the @RJC. https://t.co/qt5uI5bUIb

He then decided to retweet all of them to expose the anti-Semitism that “Generations of American Jews did not believe… still existed till now.”

This begs an obvious question. If Jews didn’t believe there was such anti-Semitism for generations, how did the ADL and its various clones manage to stay in business during the interim between the Third Reich and Donald Trump’s campaign?

Despite his explicitly encouraging trolls to tweet at him, dozens more articles appeared about the pain this poor journalist went through. We were also treated to his musings about “antisemitism in the Trump voter ranks,” and that these Tweeters could hurt Trump at the polls. Eventually the Republican Jewish Committee issued a statement denouncing anti-Semitic tweeters, but journalists are still annoyed the RJC “didn't single out the presumptive presidential nominee from its own party but rather included him — last — on a list of all three active, major-party candidates, as if the offenders are spread evenly among the campaigns” [Republican Jewish group stands up for journalists facing anti-Semitism, but journalists say it missed the point, by Callum Borchers, Washington Post, May 24, 2016].

How is random trash talk on Twitter, something literally everyone deals with, suddenly so important?

Now, these supposedly powerless trolls are apparently the bulk of Donald Trump’s supporters and incredibly powerful. This new Narrative is not just coming from the Left, but from anti-Trump cuckservatives.

I don't believe the online Trumpkins are that different than the rally attending Trumpkins despite pushback that Twitter "isn't real life."

The truth is that no one knows how indicative a few hundred “shitposters” are on Twitter are of the larger movement. In the end, this may not matter, as perception becomes reality. One’s reminded of how Robert Baden-Powell successfully defended Mafeking during the Second Boer War by tricking the Boers into believing his army and arsenal was much larger than it was.

It’s great to feel like you are part of some powerful online army constantly on the attack. Yet this perception, true or not, can have a downside. As I previously noted, the anonymity of Twitter can encourage vulgarity. While I feel little sympathy for the drama queen journalists pretending they fear for their safety because someone tweets a Holocaust joke, this type of behavior is counter-productive. At best, it forced the media to pay attention to the Alt Right, but that mission has already been accomplished.

Should we condemn it? Of course not. The leaders of the Alt Right, to the extent such “leaders” exist, have no more power or responsibility over trolls and shitposters than does Donald Trump. It is pointless to waste our time or breath denouncing or trying to silence the more provocative amongst our ranks. But as the movement grows beyond anonymous Twitter and 4chan accounts, it matters more that it strikes the right balance between memes and the obscene.

Not that the MSM is going to treat us fairly either way.