So that you won't be fooled by MSNBC's Rachel Maddow claiming Second Amendment supporters were celebrating the Oklahoma City bombing this week—as she has on April 19 in years past—Tuesday was the anniversary of the battles of Lexington and Concord, a date all Americans used to know.

This year, New Yorkers celebrated by voting to keep the country that was christened in blood at Lexington and Concord.

Until Henry Wadsworth Longfellow's poem, most Americans knew as little about Paul Revere's ride as Rachel Maddow does today.

Listen my children and you shall hear

Of the midnight ride of Paul Revere,

On the eighteenth of April, in Seventy-five;

Hardly a man is now alive

Who remembers that famous day and year.

Suspecting that the British would soon be mobilizing to crush the brewing rebellion, American patriots had been watching and waiting. When rebel leader Dr. Joseph Warren received a secret message that the British were planning to arrest Sam Adams and John Hancock in Lexington that night, he immediately alerted Paul Revere and two others in their clandestine group.

By pre-arrangement, each rider took a different route to Lexington. If any two were captured by the British, the message would still be delivered. The fate of a nation was riding that night.

The most famous of the three—except to Rachel Maddow—was Paul Revere, who later wrote a detailed account of his momentous ride.

Revere had instructed the sexton of a Boston church to climb to the top of the steeple—unobserved by the church's Loyalist minister—and signal the patriots of Charlestown with lanterns to indicate which route the British were taking: One if by land, and two if by sea. (Please tell me most American schoolchildren still know that line.)

Revere crossed the Charles River, sneaking past a British warship, to the Charlestown patriots waiting for him. For such an important mission, they had chosen a surefooted horse named Brown Beauty. Revere saddled Brown Beauty and took off for Lexington, alerting rebel leaders—and evading British patrols—along the way. 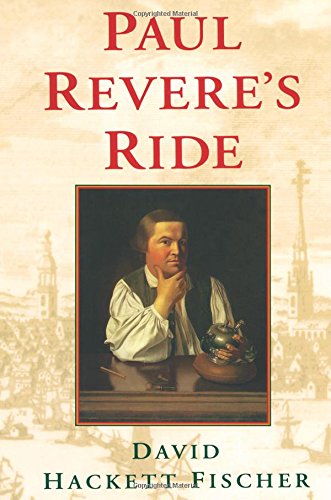 As planned, these town leaders spread the message to the local militias, a communication network that proceeded with "astonishing speed," in the words of historian David Hackett Fischer, author of the book, Paul Revere's Ride.

At around midnight, when Revere arrived at the Lexington home where Hancock and Adams were in hiding, the guard chastised Revere, telling him to stop making so much noise. "Noise?" Revere replied. "You'll have noise enough before long! The Regulars are coming!"

The second rider, William Dawes, arrived soon thereafter, and the third man, lost to history, never made it.

So Revere and Dawes headed to Concord, again setting off the alarm throughout the countryside. On their way, they met a young, wealthy doctor, Samuel Prescott, who was returning from a late evening with his fiancee. Prescott, a "High Son of Liberty," offered to ride with them since he knew the terrain and knew the people.

Halfway to Concord, they were captured by the British, but Dr. Prescott managed to escape and ride on, alerting the towns all around Concord. In the wee hours of the morning, he stopped at his home in Concord to wake his father and brother, also doctors, whereupon his brother, Abel, saddled up and took the warning south.

The Battle of Lexington at sunrise next morning, April 19, would not have given Americans much hope. British troops made short work of the disorganized and massively outnumbered militiamen.

But Concord was a different story. This was the shot heard "round the world."

By the time the British reached Concord, militias from dozens of towns had received the call and were ready for battle. The town's minister, William Emerson—grandfather of Ralph Waldo Emerson—urged on the rebels, slapping one terrified young solider on the back and saying, "Stand your ground, Harry! Your cause is just and God will bless you!"

Although still outnumbered, the Americans hit the British so hard, they retreated all the way back to Boston, with the militias bird-dogging them the whole way.

Having seen the Americans fight, the leader of the British forces, Lord Hugh Percy, who had taken a dim view of the Colonists until then, concluded, "[w]hoever looks upon them as an irregular mob, will find himself very much mistaken."

Hancock and Adams were safe, the rebels' ordnance secure, and the war that gave birth to the greatest country in human history had begun.

But today, the comfortable inheritors of that country would rather allow it to become a dumping ground for the Third World than risk being called "racist."

In all, about 50 Americans were killed in the Battle of Concord. By population, that's the equivalent of more than 6,000 Americans dying in a single military action today.

But today, Republican political consultants would rather throw away the country those brave patriots died for, than risk their cozy salaries, jobs and status.

Following the Battle of Concord, Dr. Prescott left his fiancée, his family and his wealth to fight for the revolution. A few years into the war, his ship was captured by the British. No one ever heard from him again. His fiancée waited for him for eight years, until finally, a returning soldier reported that Prescott had died in a Nova Scotia prison. His fiancée married, then died young.

But today, most pundits would rather promote open borders and watch our country disappear than lose their TV gigs.

Dr. Prescott's brother, Abel, was badly injured by the British at the Battle of Concord. He died from his wounds a few months later—nearly a year before the signing of the Declaration of Independence.

But today, rich ranchers and farmers would rather see the country Abel died for overwhelmed with foreign cultures than give up their cheap foreign labor.

So far, seven of the 13 Colonies have spoken: Georgia, Massachusetts, New Hampshire, North Carolina, South Carolina and Virginia—and, on the anniversary of Lexington and Concord, New York. All seven held elections, not party-rigged conferences or caucuses. All of them have gone for Trump. It looks like the 13 Colonies are trying to save America, once again.