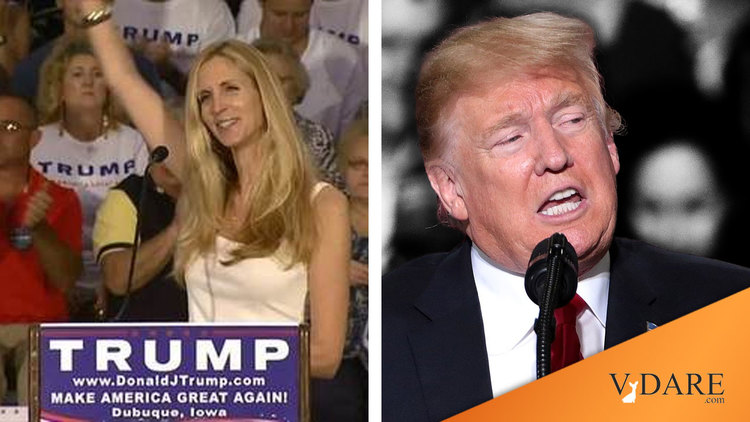 Ann Coulter: Most Disloyal Man in History Finally Finds a Cause Worth Fighting For

Why, in the last 12 days of his presidency, did Donald Trump suddenly become the authoritarian of liberal fantasies? He sure wasn’t an authoritarian for the past four years—he was a spineless wonder.

OK, never mind. I didn’t know I’d have to get out of my chair. I’ll just lie and tell my supporters it’s already done.

But this time, it was finally about him.

For the items on Trump’s 2016 campaign agenda, he actually had solid arguments. On overturning the election, he has no argument at all.

The bulk of Trump’s rally speech last Wednesday consisted of the fanatically detailed claims of a paranoid about the election being stolen. The media, of course, have barely covered this part of the speech, since they’re determined to suppress all mentions of any oting-vay aud-fray.

Not to worry, media! I’m angrier after reading Trump’s full exegesis on the election than I was when you were hiding it from me.

He cited vote tallies in this and that county, the media’s use of “suppression polls,” constitutional provisions, the precise time of day votes came in, different states’ voting rules and practices, the numbers of felons, dead people and illegal aliens who allegedly voted in various states and on and on and on.

Do you think Trump has any idea how many illegal aliens are in the country right now?

None whatsoever. Trump knows more about the accuracy settings on signature verification machines in Clark County, Nevada, than he does about DACA.

For four years, I’ve been told that Trump couldn’t keep his campaign promises because: No one has ever faced such historic resistance! It’s not his fault. Poor Trump!

Well, how hard was it to keep his promises compared to overturning a presidential election?

Now that we’ve gotten a bracing view of Trump’s skills as a demagogue, I just want to know: Why didn’t he ever use his powers for good? Why did he never hold a rally on the ellipse and ask his supporters to pressure their representatives to fund the wall? To repeal Section 230? To penalize outsourcing?

None of those proposals is insane. Now that I think about it, they are the exact ideas that got Trump elected. Another plus: Asking his supporters to lobby for popular issues would not have ended with senators and House members fleeing for their lives.

Even as he was goading his most gullible supporters into criminal activity and—in one case—death, he still didn’t give a crap about them.

Trump was delighted by the mob he’d unleashed on the Capitol, but according to sources, appalled by how badly dressed they were. He “expressed disgust on aesthetic grounds over how ‘low class’ his supporters looked,” one Trump adviser told New York magazine, adding, “He doesn’t like low-class things.”

Why are the cameras showing only my overweight supporters? Where are the hot women?

Yes, these were the deplorables, the left-behind, working-class Americans hanging on by their fingernails, who had bet their last dollar on Trump. (While we’re on the subject, please drop the “coup” talk, media. We’ve seen the pictures. These weren’t exactly Master of the Universe types.)

Democrats despise them, and Trump uses them.

For four years, Trump screwed over these very working-class Americans while giving Sheldon Adelson, Wall Street and McConnell everything they wanted—sometimes things they didn’t even ask for!

Close your eyes … Surprise! I’m giving you the West Bank, too!

(I admire Israel’s gumption and wish we could be more like them, but, seriously, did they even ask for approval of their settlements?)

At the same time, Trump said to the deplorables: Sorry, I guess we didn’t have time to get to the wall …

So obviously, when it came to launching a mad plan with zero chance of success solely to benefit himself, Trump turned to the weakest members of society, the very people whom he had used to get elected and then betrayed. (Trump’s best buddy, Benjamin Netanyahu, congratulated Joe Biden seconds after he was declared the winner.)

In his rally speech, Trump vowed he’d march to the Capitol with them. Go fight that guy! I’ll be right behind you. After the rally, of course, he immediately repaired to the White House, where he could enjoy a nice lunch and watch the poor saps on TV.

Trump sees other humans only in terms of what they can do for him. He will ask for favor after favor after favor, no matter how humiliating or burdensome, but the moment someone says “no,” will viciously attack him. Ask Jeff Sessions.

Thus, Trump came up with the manifestly insane idea that his vice president, Mike Pence, should refuse to certify the electoral votes. “All Vice President Pence has to do,” Trump said at the rally, “is send it back to the states to recertify, and we become president, and you are the happiest people.” It’s even good for me, too!

On and on he went: “So I hope Mike has the courage to do what he has to do, and I hope he doesn’t listen to the RINOs and the stupid people that he’s listening to.”

The vice president, not being a lunatic, had already declined Trump’s very special offer—limited time only!—earlier that morning. Trump was setting up his supporters to be furious with Pence when they got to the Capitol and realized he had not awarded the election to Trump.

At 2:24 p.m., as Trump watched the mob streaming through the Capitol, he tweeted: “Mike Pence didn’t have the courage to do what should have been done to protect our Country and our Constitution …” Whereupon, some in the crowd began chanting, “Hang Mike Pence!”

Trump never called to find out if Pence and his family were safe.

For 48 hours, Trump didn’t lower the White House flag to half-mast in honor of Brian Sicknick, the Trump-supporting Capitol Hill Police officer who died from injuries sustained during the siege. The guy could at least have worn a decent shirt. Nor did he call Sicknick’s family. Pence did.

Sometimes you get the feeling Trump’s not really thinking about other people.

The reason Trump was a lazy, feckless coward for the past four years was that, once it got him elected, he didn’t see how the MAGA agenda did anything for him. And the reason he became a whirling dervish of demagogic activity last week was that it was all about him.