It was not a good look for President Trump to be flanked by Dick Durbin and Steny Hoyer among a gaggle of other amnesty boosters in the White House on Tuesday. As Ann Coulter observed about the scene, “When Kevin McCarthy is the hardliner on immigration in the room, I think we can call this the lowest day in the Trump presidency.”

Worse, it was a quite a shock to hear Trump, who campaigned as the tough immigration enforcer, speak positively about “comprehensive immigration reform” — aka mass amnesty:

You can read the official White House transcript of the 55-minute meeting here: Remarks by President Trump in Meeting with Bipartisan Members of Congress on Immigration.

Tucker Carlson was not impressed with President Trump’s performance either. 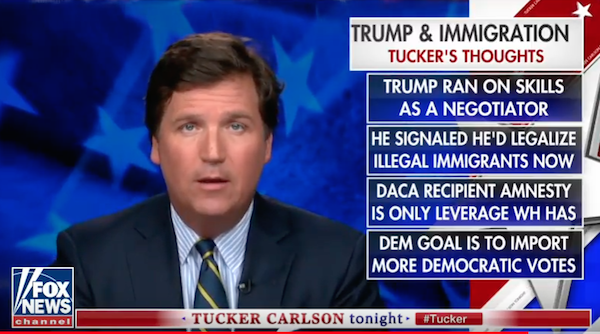 Trump’s switch was Carlson’s first topic on his Tuesday show:

TUCKER CARLSON: President Trump ran for office to fix Washington and make good deals and do a better job than the corrupt lawmakers he said were wrecking the country. He was right, they were wrecking the country. And yet today in remarkable twist, the president held a televised meeting with the very swamp creatures he wants denounced. He told them he trusted them to craft immigration policy without his input; then he said he would be willing to accept any deal they produced, even a bad one.

PRESIDENT TRUMP: When this group comes back hopefully with an agreement, this group and others from the Senate, from the House, comes back with an agreement, I’m signing it. I mean, I will be signing it. I’m not going to say, oh gee, I want this or I want that. I will be signing it because I have a lot of confidence in the people in this room that you will come up with something really good.

CARLSON: At one point the president agreed with Democratic Senator Dianne Feinstein of California that it would be wise to handle the question of DACA separately before negotiating any meaningful reform of our broken and dysfunctional immigration system.

SENATOR FEINSTEIN: I don’t know how you would feel about this, but I’d like to ask the question: What about a clean DACA bill now, with a commitment that we go into a comprehensive immigration reform procedure? Like we did back — oh, I remember when Kennedy was here and it was really a major, major effort, and it was a great disappointment that it went nowhere.

TRUMP: I remember that. I have no problem. I think that’s basically what Dick is saying. We’re going to come up with DACA. We’re going to do DACA, and then we can start immediately on the phase two, which would be comprehensive.

CARLSON: Key allies very close to the president on immigration told us this afternoon they were shocked by what they saw in that meeting. It was a completely different Donald Trump from the one we watched on the campaign trail just two years ago. How different? Let’s put it this way. Trump’s rival from the 2016 race Jeb Bush who was on the far left of Republican sentiment on immigration questions, tweeted these words in response to the meeting: “Encouraged the president is seeking bipartisan solutions to our immigration challenges.”

In 2016, Donald Trump ran on the premise that America’s borders ought to be real, that the repeated amnesties of the past have betrayed voters and that this country deserves an immigration policy that looks out for American interests rather than those of foreign countries. Almost nobody in Washington agreed with him at the time, almost nobody in Washington agrees with him now. Congress is full of people from both parties who believe that the point of our immigration policy is to provide cheap labor to their donors and to atone for America’s imaginary sins against the world. They couldn’t care less about immigration’s effect on you or your family. Yet these are the same people the president now says he trusts to write the immigration bill, the one he’ll sign no matter what it says. So what was the point of running for president?

You’ll remember the president also ran on his skills as a negotiator and he clearly has skills as a negotiator. Where were they today? The president signaled he’s be happy to legalize hundreds of thousands of illegal immigrants now, and that at some point in the future, tackle all that other stuff like making sure they can’t bring millions of their relatives from the third world with them. It’s not much of a negotiation. Amnesty for DACA recipients is the only leverage the White House has.

Once the president agrees to let them jump to the head of the line ahead of millions of other people hoping to come here legally, the negotiation is over. At that point, why would Democrats agree to anything? Ending chain migration, the diversity lottery, supporting a merit-based system that might actually help America? No chance.

The Democrats’ goal is to import more Democratic voters and by any means necessary. Once they retake the Congress and the presidency — and if Trump betrays base on immigration, that will definitely happen — it is over. Say goodbye to borders. They are done. Keep in mind that the top Democrat in the House recently thanked illegal aliens for sneaking into this country. That’s how Democrats feel, and they are not pretending anymore.

Being a Trump voter isn’t always easy, it’s like rooting for the underdog in baseball, the old Chicago Cubs. On one level there is pride, the pride that comes from doing something that fashionable people consider insane, and that’s a good feeling. But there’s also some disappointment along the way, and honestly there is some embarrassment. You silently bear it because you know that when they finally win the World Series it will be worth everything you went through. Every sarcastic dig from your brother-in-law at Thanksgiving will seem small by comparison. In the Trump presidency, the World Series is this immigration bill, the big payoff, the whole point of the exercise, and they’re not allowed to blow it.