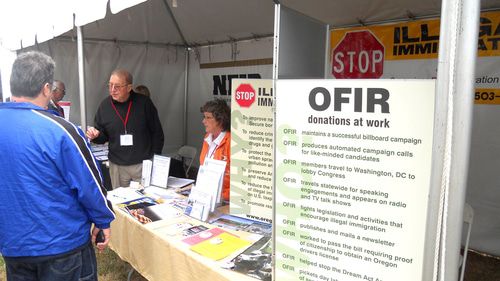 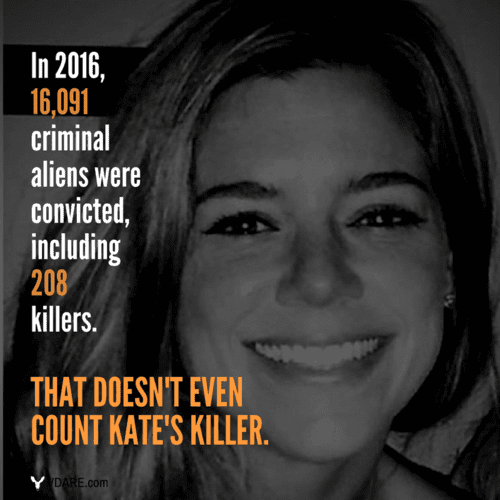 Seven years ago, polymathic commentator Mark Steyn mused regarding American officialdom, “I have minimal expectations of this country’s depraved political class.” And shortly after Kate Steinle’s killing in San Francisco by an illegal-alien drifter three summers ago, Steyn linked the political class and the phenomenon:

[A] young American woman was murdered for kicks in a supposed "sanctuary city" on the eve of the holiday weekend by an illegal immigrant from Mexico. He had flouted US immigration law for years - or, to be more precise about it, local, state and federal officials had colluded with him in the flouting of US immigration law, to the point where San Francisco's sheriff actively demanded the return of this criminal to his "sanctuary city", thereby facilitating the homicide of an actual citizen, taxpayer and net contributor to American society.

Although the usual term for this pernicious phenomenon is “sanctuary city” (Treason Town?) most of these jurisdictions are actually counties, while a few are entire states. (See interactive map). 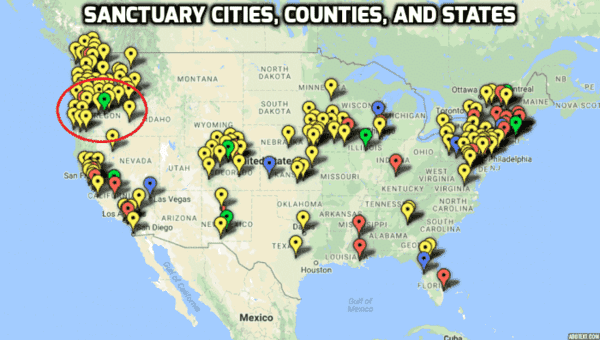 The City of Los Angeles’s police Special Order 40 is probably the most consequential and famous—or notorious.

It was way back in 1987 that Oregon’s depraved political class enacted a sanctuary law, currently Chapter 181A.820 of Oregon’s Revised Statutes.

Now the campaign-tested patriots of Oregonians for Immigration Reform [OFIR] are working all out, gathering signatures to put a repeal of 181A.820 on the ballot for this November.  The OFIR-ites had triumphed, magnificently, in November 2014 by nullifying,­­ via an intensely-fought “citizens’-veto-referendum,” the driver’s-cards-for-illegal-aliens law that their legislative overlords and scandal-enmeshed governor had imposed upon the state in May 2013.)

Why are sanctuary laws so bad? The urtext on the matter is Heather Mac Donald’s classic article The Illegal-Alien Crime Wave, published in the Winter 2004 City Journal:

Some of the most violent criminals at large today are illegal aliens. Yet in cities where the crime these aliens commit is highest, the police cannot use the most obvious tool to apprehend them: their immigration status. In Los Angeles, for example, dozens of members of a ruthless Salvadoran prison gang have sneaked back into town after having been deported for such crimes as murder, assault with a deadly weapon, and drug trafficking. Police officers know who they are and know that their mere presence in the country is a felony. Yet should a cop arrest an illegal gangbanger for felonious reentry, it is he who will be treated as a criminal, for violating the LAPD’s rule against enforcing immigration law.

Mac Donald was referring to the internationally-notorious MS-13 gang and to Los Angeles’ Special Order 40.  The restriction on cops that she described is exactly what Oregon’s 181A.820 levies on all law enforcement there.  And that’s reeeeeely stupid because of something that Mac Donald spelled out later in her article:

Trying to build a homicide case, say, against an illegal gang member is often futile … since witnesses fear deadly retaliation if they cooperate with the police. Enforcing an immigration violation would allow the cops to lock up the murderer right now, without putting a witness’s life at risk.

Mac Donald’s point is worth reiterating and remembering: Being an illegal alien is a status crime. In particular, illegal re-entry after removal (“deportation”) is a felony (see 8 USC § 1325 and 8 USC § 1326), a crime that stimulates enforcement even where I reside, in the remote mountain fastness of Montana.

So if a cop recognizes someone on the street who he knows has been removed, he can be confident that he’s looking at a felon—a felon who can be taken off the street without needing testimony from a witness.  That can be a matter of life or death.

It can also be a more-general resource saver for local police departments, since it removes a likely source of future crimes.

Notwithstanding any other provision of Federal, State, or local law, a Federal, State, or local government entity or official may not prohibit, or in any way restrict, any government entity or official from sending to, or receiving from, the Immigration and Naturalization Service information regarding the citizenship or immigration status, lawful or unlawful, of any individual.

Cynthia and I spoke by phone recently.  (Disclosure: She and I have known each other for several years, and I gave a talk at OFIR’s August 2016 meeting, my subject being the manifold downsides of refugee resettlement; slides from that presentation are here.)  She told me that the effort to qualify IP22 is already the most strenuous endeavor she’s ever worked on—and she had led the 2013-2014 “NO on 88” driver license effort.

“Unlike with the ‘No on 88’ drive, where everything broke our way, it seems like I wake up every day to learn that a new ‘spike strip’ to hobble us was laid down overnight,” she said.

The “spike strips” have primarily been legal monkey-wrenching allowed by the process of ballot-measure qualification in Oregon and taken full advantage of by the Open Borders forces, i.e. powerful labor unions, ethnic special-interest groups etc.

You would almost think the Treason Lobby is afraid of facing Oregon voters.

For example, after OFIR had passed preliminary hurdles, Oregon Secretary of State Dennis Richardson authorized them to begin collecting signatures even while their requested ballot title—“Repeals law limiting use of state/local law enforcement resources to enforce federal immigration laws”—was being challenged.  State law was silent on whether this was allowed, so Richardson made an administrative call.

But the opponents sued over that, too, whereupon Richardson backed down, so signatures that had been collected during that period were wasted.  It was, effectively, “Start over, OFIR, after they’ve delayed you for as long as they can.”

Each re-start has required gathering, anew, 1,000 “sponsorship” signatures.  It surely requires “making the sale” again to many people who are sympathetic but who haven’t followed the tortuous process and are understandably confused by it.

With those hurdles behind OFIR, signature-gathering is now in full force.  The all-volunteer group has had productive days at gun shows and sportsmen’s shows.  But a fully-paid, scheduled agreement to permit signature-gathering at a homebuilders show in eastern Oregon fell through suspiciously, likely from meddling by OFIR’s opponents.

OFIR has been encouraging its supporters to collect signatures in front of public venues such as post offices, state liquor stores, libraries, and Department of Motor Vehicles offices.

Cynthia also told me that some small retail establishments—such as barber shops, hardware stores, and nail salons—are helping by keeping clipboards with multi-signature forms near their cash registers, “while keeping eyes on the clipboard, to forestall chicanery by the opponents.”

And Oregon voters in general can “collect” their own signatures and mail them to OFIR.

In a current message to their email distribution, OFIR advertised their upcoming bi-monthly meeting at the Best Western Mill Creek Inn in Salem this Saturday (June 2) at 2 p.m., the last meeting before signatures are due.  The message included this summing-up of what’s at stake:

If we succeed in getting IP 22 on the November ballot we will be the only state in America to have a chance to vote on whether or not being a sanctuary state is a good idea.

Our opponents, including the University of Oregon, are trying every trick in the trade to undermine our efforts to put the vote up to citizens.  They know that if we have a chance to vote against sanctuary policies we will overturn them.  Our opponents are well aware of how the vote on driver cards for illegal aliens turned out.  In the 2014 election voters by a two to one margin voted against illegal alien driver cards even though we were outspent 10 to 1 in the campaign and every newspaper in the state came out against our efforts.

Final note: VDARE.com Editor Peter Brimelow has argued that the GOP/ GAP requires breaking through in “Greater New England, from Portland, Maine to Portland, Oregon.” Yet the GOP invariably runs away from immigration patriot initiatives—and loses, although they carry overwhelmingly, as in Montana in 2012.

But surely, post-Trump, the GOP can see that IP 22 is just what it needs on the Oregon ballot in this mid-term year and is supporting it generously, right?

Paul Nachman [email him] is a retired physicist and immigration-sanity activist in Bozeman, MT