Ann Coulter: Could Hillary Tell Us What Percentage Of Muslims Are 'Deplorable'? 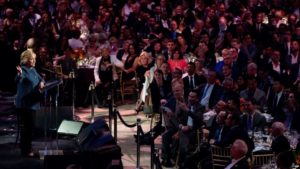 It wasn't just the well-heeled donors at the Cipriani Club who laughed and applauded when Hillary called half of Trump's supporters a "basket of deplorables"—"racist, sexist, homophobic, xenophobic, Islamophobic.”

Her campaign advisers also thought it was a killer line. This wasn't an off-the-cuff remark captured on a bartender's cellphone. We know that because: (1) nothing is ever off-the-cuff with Hillary; (2) it was part of her scripted remarks, and (3) she's used it before.

Nor did anyone in the media mind one little bit. They've been calling Trump's supporters racists for more than a year now. Calling other people "racist" is the media's favorite thing to do.

Whenever the left talks about "racism," it has nothing to do with what's good or bad for black people. It's just another event in the Fabulous White People competition, where black people are the chips.

There was a period in this country when racism was a big problem. Unfortunately, when it mattered, liberals were on the wrong side. Only when the principal danger facing most black Americans was that they'd be patronized to death, did liberals start seeing "racism" everywhere.

Sad people with meaningless lives were suddenly empowered to condemn other people. I beat you in blacks yesterday; I'm going to beat you in women today. This is what makes them feel superior to other people, especially other white people. It's not about racism, sexism, homophobia, etc.; it's just a self-actualization movement for people with emotional issues.

The dead giveaway is that all the hacks on the left are using the same jokes. Compare the opening lines of James Kirchick [send him mail] of the New York Daily News and Dana Milbank [Email him] of The Washington Post in their columns on Hillary's "basket of deplorables" insult:

It never occurs to a hack that someone else may have had the same idea. But as long as liberals are such perfect thermometers of deplorableness, could they tell us how many Muslims are "deplorable”— specifically, what percentage are “sexist” or “homophobic"?

For decades now, the most important job of anyone covering a presidential election is to unceasingly demand that the Republican candidate disavow David Duke. This laughably irrelevant man must be trotted out as a bogeyman to frighten NPR listeners. Instead of reporting news, journalists have become Official David Duke Disavowal Demanders.

The only way we find out that Duke is still alive is that Republicans are asked to denounce him every four years. For all we know, Duke died 20 years ago and the media are using a body double.

It doesn't matter who the candidate is—the GOP could run Bobby Kennedy, and journalists would incessantly demand that Bobby "disavow" Duke.

The same people who move heaven and earth to make sure their kids aren't blocked out of the right colleges by affirmative action, who couldn't care less about the astronomical unemployment rate and rampant crime in the inner cities, who think there's a lovefest going on between African-Americans and the illegal aliens taking over their neighborhoods and jobs, are just showing off to other white people by calling Trump ... "RACIST!”

Donald Trump has never been accused of racism in his life. Unlike self-righteous PC enforcers, who go to extraordinary lengths to avoid extensive contact with blacks, he's hired lots of black people. His golf clubs famously admit blacks, Jews and Asians—and are often the only clubs in town that do.

Black celebrities as well as ordinary black Americans all say the same thing about Trump—that he respects them.

Jamiel Shaw, whose son was killed by an illegal alien, spoke at Trump's first presidential rally, saying: "He's the kind of man you would want to be your dad. He's a nice guy. He put himself out there for black people. I know I can trust him.”

Mike Tyson said of Trump: "Listen: I'm a black motherf–ker from the poorest town in the country. I've been through a lot in life. And I know him. When I see him, he shakes my hand and respects my family. None of them—Barack, whoever—nobody else does that. They're gonna be who they are and disregard me, my family. So I'm voting for him. If I can get 20,000 people or more to vote for him, I'm gonna do it.”

In 2006, long before Trump was thinking of running for president and was still a regular on "The Howard Stern Show," Stern pressed him on whether Ivanka would ever date a black guy:

Stern: Would (Ivanka) ever date a black guy? That would not go over at Mar-a-Lago.

Trump: Yes, she would. She would. Yeah. Absolutely.

Stern: You would have no problem with that?

Robin: He would love that.

Trump: The answer is: She would. She would have no problem.

And then in 2015, Trump decided to run for president as a Republican and, for the first time in his life, became a "racist.”