On the morning of August 12, I and some other 20 Alt-Right men, not a few of them VDARE.com readers and supporters, assembled in a hotel outside Charlottesville VA, in preparation to attend the now-infamous “Unite the Right” rally at Lee Park.  Our intentions were simple: to hear the speeches, stand by their friends, and put forth a good face for the movement.  Optimism reigned following the previous night’s torch-lit march, with its moving imagery and impressive numbers against the few beasts gathered to oppose it.  And while we came prepared to face hostile foes, they naively assumed that the police would preserve the peace, as agreed, by separating attendees of a legally-sanctioned rally from protesters.

We won’t make that mistake again.

In planning for the event, three main risks were apparent: doxing, arrest for scuffling in self-defense, and physical assault.  We even agreed in advance to take a punch or endure a fusillade of rocks and bottles to keep our noses clean and not appear as aggressors.  Many of us packed helmets, goggles, gloves, and other equipment in case things went pear-shaped.  But we did not wear them initially, in order to avoid the bad “optics” that hand-wringing critics constantly harp upon.

Helicopters could be heard droning overhead as we marched to the park, providing an eerie battlefield aura.  We paused at an intersection as a column of riot police crossed by.  Fools that we were, we assumed that they were en route to the park to enforce order and protect our people from assault, and a chant of “Blue Lives Matter!” erupted from the dozens waiting for them to file past.

A friend documented our entire experience on video; in re-watching the footage, seeing cheers for the same “law enforcement” officers who would shortly suppress our rally and disperse its attendees into an armed AntiFa mob was a new red pill for even the most jaded among us. 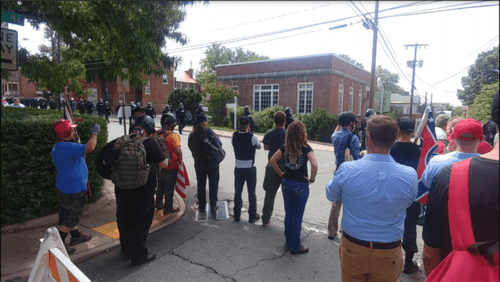 Unite the Right rally attendees cheer riot police en route to Lee Park, where police would then disperse the same attendees into an unpoliced mob of AntiFa.

As we turned onto Market Street for the main approach to the park, it quickly became clear we had exited tame back streets manned by disapproving locals with inane homemade signs only to enter a harsh new dimension of armed, masked, violent AntiFa operating with impunity.  A menacing man wielding a club, clad in balaclava, temporarily lifted his veil to spit on us (see below).  A gender-ambiguous creature then screamed “We will replace you!” followed by deadpanning, “That’s why your wife [—] black dudes.”  The most popular chant from the horde was “Nazi scum!”  Not a single police officer could be seen.

A brief but intense encounter with vivid violence came at the southeast corner of Lee Park, where a courageous Alt-Right shield wall was doing one of those jobs that American police apparently would not—separating rally attendees from rabid counter-demonstrators.  An AntiFa toady stole the hat of one of our comrades, which served as both physical and dox protection.  Naturally he sought to retrieve his property, in the process getting mobbed by the crowd and receiving a nasty laceration from a still-unidentified object.  (This is a common AntiFa tactic—to provoke and isolate an individual, then swarm him.)  I entered the fray to recover the hat and prevent my friend from being swallowed by the crowd, in the process receiving a series of clubs to the head and torso in a surreal sort of baptism into politically-motivated Leftist American street violence. 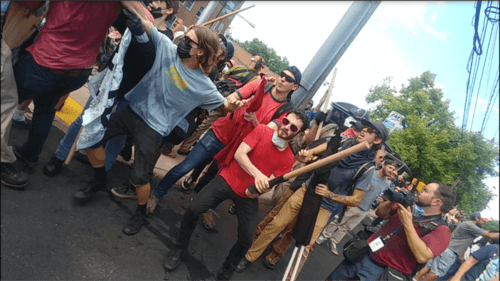 Masks, clubs, and intent to assault: a Charlottesville welcome party operating unfettered just steps from a legally-sanctioned rally for which authorities had months to prepare.

Utterly disabused of any notion that we were in the middle of anything other than an urban riot, we entered Lee Park through the shield wall with pure gratitude and pride in their valor, like wounded stragglers being welcomed past friendly front lines.  Confusion and disorder reigned in Lee, until one of our organizers with a bullhorn helpfully relayed the police message: “If you want to be arrested for civil disobedience, stay.  If you do not want to be arrested, leave.”  In searing irony, the only noticeable police presence was at the foot of Robert E. Lee, as if they were there to protect the threatened monument.

Incarceration not being on the agenda—for a reason I discuss below—we marched out of the park past another phalanx of barely more restrained AntiFa, and eventually returned to our cars and regrouped at the hotel once our injured comrade was rescued.

We have a vivid digital recording showing clearly our innocence, our assailants, and the inexcusable negligence of the Charlottesville Police Department and Virginia State Police.  In particular, video exists in which the AntiFa who jumped me are clearly identifiable. Yet in this dystopian America, we are forced to choose between pursuing justice against criminals vs. facing the loss of reputations, incomes and careers that would result from being outed as attendees of what the Main Stream Media, with blatant co-ordination, has branded a “white supremacist” rally.

This is also why we most of us could not engage in civil disobedience. In effect, Leftist workplace lynch mobs are depriving us of the protection of the law. It’s another aspect of anarcho-tyranny. (As far as I know, no Antifa have been arrested and charged.)

Both Alt-Right detractors and supporters have criticized the event organizers for not better regulating its optics—including the presence of at least one Nazi flag among many dozens.  (No-one I know recognizes the flag-bearer, nor—suspiciously—is he among the many attendees subsequently doxed by the Left’s cyber army).

If the police had done their jobs, there would have been ample time to regulate the event symbolism, including among the representatives of national socialist movements in attendance. (There were a few, but—significantly—these groups no longer use Third Reich symbols. The largest group was probably sincere Southern heritage supporters)

But we must not fool ourselves that we can ever win MSM/ Ruling Class approbation by pandering to elite sensibilities, or by throwing compatriots to the wolves.  Going forward, a balance can be struck between not providing free ammunition to our enemies, but also not clutching pearls.  We’re all in this together. And when is the Left ever required to purge Communist flags from its demonstrations? 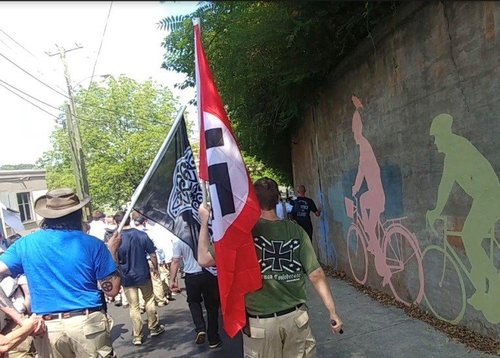 Agent Provocateur or earnest national socialist? In the Charlottesville Crucible, we were grateful for every man on our side, and did not enjoy the luxury to indulge in policing event optics.

However Charlottesville shakes out – and it remains a major global news story nearly a month after the event – it is unquestionable that we whacked the anti-white hornet’s nest with a giant stick.  And in doing so, we revealed state-sanctioned chaos deliberately unleashed to prevent our voices from being heard, and have provoked what President Trump has called the “Alt Left” into new paroxysms of violence and vandalism.

Whether Middle America wakes up in time to save itself is another question.

Would we do it all over again?  I believe to a man, absolutely.  Could the event have been better executed?  Of course.  But no one could have expected such gross negligence from law enforcement, who bear the responsibility for the subsequent street chaos that led to the car crash.

Next time, we won’t be so foolish as to presume that police will hold up their end of the bargain, or that our enemies are anything but vicious, violent monsters utterly committed to destroying the Historic American Nation.  The struggle has just begun.

Max North [Email him] has been a VDARE.com supporter since 2006, when he noticed MS-13 tattoos appearing in his neighborhood just as the Uniparty was making another push for a mass amnesty.