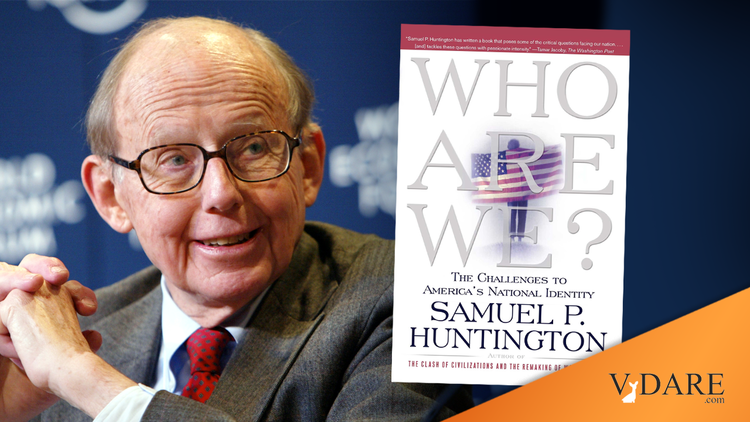 Sam Francis and John O'Sullivan rightly hail Who Are We?, Samuel Huntington's new book on American national identity, as a welcome sign that the elite consensus in favour of Third World mass immigration may be about to fracture.

After all, it is not every day that a prominent Harvard professor characterizes the massive wave of (especially) Hispanic immigration as an officially sanctioned foreign invasion of America.

Indeed, as Huntington establishes, most of his fellow academics are themselves a part of the problem.  The professoriate, as part of the "denationalised" and cosmopolitan elite, refuses to require that immigrants assimilate into the historic culture of America.

Instead, committed to the dogma of diversity, U.S. cultural, corporate and political elites demand that their fellow Americans assimilate to the multi-ethnic, multi-racial and, soon, bilingual society that is being imported by immigration policy.

Huntington certainly deserves credit for stimulating debate.  No one reading Huntington's book can doubt that the cultural hegemony of the "core Anglo-Protestant identity" established in colonial America by English settlers, is now up for grabs.

And yet it is more than a quibble or a rant to observe that Huntington, far from being an immigration restrictionist, is at pains in interviews to declare that immigration—from whatever source ("color doesn't matter")—is a "good thing."

His only proviso: immigrants should assimilate into the existing "Anglo-Protestant culture."

Huntington objects to the massive flood of Hispanics pouring across the southern border because it is predominantly from one source, Mexico, and, therefore quite unlike earlier waves of non-English-speaking immigration. Large clusters of Hispanics living along a more or less open border with Mexico are unlikely to ever assimilate into a unilingual, Anglo-Protestant culture, especially if American elites are unwilling to make that demand.

Huntington worries that, should one or more states, particularly in the Southwest, follow the path already blazed by the city of Miami, they could become American Quebecs—or even the Aztlan of La Raza's revanchist dreams.

But what if the USA was an island like Australia?  Here, the legal immigration program brings in proportionately even more immigrants (over 130,000 this year) than in the USA.  But rather than encouraging a massive influx of unskilled, poorly educated workers, the Australian government tries to attract skilled migrants from the whole spectrum of Third World countries so that no one race or nationality predominates— although both the skilled and family reunion categories now tend to give Asians a competitive edge.

Despite the existence of growing ethnic enclaves in Australian cities, most migrants do face significant pressure to acquire some facility in English, if only as a lingua franca.

But whereas Huntington is concerned with the immediate issues arising out of the millions of "low quality" Hispanics pouring into the USA, the dramatic surge of "high quality" Asian immigration in Australia poses a different, long term threat to national identity and social cohesion.  Americans may be encountering a vast new underclass, but Oz is getting a new overclass (if my law school classes are a reliable guide to the future).

Every year thousands of Anglo-Celtic children are displaced from the selective schools by an expanding cadre of well-coached, English-speaking Asian students.  Having failed to gain entrance to highly competitive university courses, the next generation of Australian men, in particular, will become a rare breed in the educated professions.

Of course, Australians have also been provided with a brand new underclass as well.  Just recently in Sydney, profoundly alienated gangs of Australian-born Muslim guys have used their English language skills to snare and pack-rape several Aussie girls. At the top or the bottom of the social pyramid, a common language does not guarantee a community of interest.

Huntington might hope, as do many immigration enthusiasts in Australia, that assimilation would occur eventually, whether or not elites can bring themselves to promote it.  Certainly, it is an article of faith for many other, ostensibly "conservative" Americans, that race and ethnicity do not present permanent barriers to the effective acculturation of immigrants.

And John Derbyshire has indeed pointed to the American-born children of several Chinese families in his circle of acquaintances who came to the USA in the 1980s as models of successful assimilation.  Now entering their teens, he says they

"are indistinguishable in tastes and habits from any other American kids.  They eat pizza, follow baseball, memorize Britney Spears lyrics, and introduce reported speech with the 'like' construction."

So much for the Yellow Peril!  But that cozy image of cultural convergence reveals the fatal flaw in Huntington's analysis. The stern Puritan culture of colonial New England has become almost as alien to American teeny boppers as that of the Celestial Kingdom.

Even the English language that they share in common with Australian, Canadian and British kids has been uprooted and deracinated, reflecting the power of a transnational, impersonal, context-free, corporate culture.

Sam Francis insists Huntington is wrong to identify the "American Creed" as a central component of American national identity.  But it is even more misleading to claim that the "core Anglo-Protestant culture" established in the British North American colonies has survived, intact, down to the present day.

That culture was rooted in a free, more or less "stateless," society of autonomous, self-governing households, communities and corporate bodies politic and gave rise to a world-renowned "constitution of liberty."

The character of the American people was altogether different in the colonial and early republican periods.  Sociologist David Riesman described in his celebrated The Lonely Crowd the "inner-directed" character typical of those days.  Knowing the difference between right and wrong, Americans were then "rugged individualists" who had a sort of inbuilt gyroscope that enabled them to stay on course, whatever the obstacles.

Nowadays, most Americans (especially in elite circles) display an "other-directed" character of the sort essential to success in corporate, governmental and academic bureaucracies.  Many ordinary working-class Americans may retain a residual Anglo-Protestant, inner-directed character. But, as sociologist Robert Jackall remarks, the "moral ethos of managerial circles…is an ethos most notable for its lack of fixedness."

The other-directed character requires, not an internal gyroscope, but a sort of radar able to pick up minute shifts in the always-changing relationships with one's significant others.  "Since these relationships are always multiple, contingent and in flux," the most striking characteristic of managerial morality "is an essential, pervasive, and thoroughgoing pragmatism." [Moral Mazes: The World of Corporate Managers (1988)]

It is the rootless cosmopolitanism of corporate culture to which immigrants are expected to adapt today.  There may be an Anglo-Protestant, or more broadly, Anglo-European majority population in the United States. But the Anglo-Protestant culture of their ancestors has lost its hegemony.

Peter Brimelow, citing Brecht, famously likened American immigration policy to an attempt by America's rulers to dissolve the existing people and elect another.  To save themselves white Americans will have to reject the statist idolatry that Huntington mis-identifies as patriotism.

Confronted with the ruins of their culture, and having been abandoned by the state which purports to represent them, white Americans will have to fall back on their inherited racial and ethnic identities.

Only then will the historic American people find the strength to turn the tables on cosmopolitan elites.

In the end, white Americans will have to reinvent a ruling class grounded in a genuinely patriotic reverence for the culture of their forefathers.

For them, the alternative amounts to suicide.

Drew Fraser [email him] is a professor of constitutional law and history at Macquarie University, Sydney, Australia.