With Arab civil rights groups (see “The Flight from White” below) finally standing up to the white male power structure stop and demanding they stop oppressing them by considering them white and start letting them in on the minority business development preferences handed out to other immigrants such as Hispanics and South Asians for being nonwhite, it’s thrilling to see that one Arab striver, a man who has had to struggle against white privilege under the intersectional burden of being of both Latino/Latina and Middle Eastern-North African ethnicities, is taking a courageous stand against America’s racist immigration restrictions.

Carlos Slim, the Mexican billionaire who ranks as the world’s second-richest person, has introduced a campaign to integrate about half a million young immigrants into the U.S. workforce.

Carlos Slim earned his money the hard way: he personally invented the telephone in 1875.

About 1.1 million people in the U.S. are eligible for work authorization under a program known as Deferred Action for Childhood Arrivals, or DACA, for undocumented immigrants who arrived to the country as children. Only about half have been approved, Carlos Slim Foundation Chief Executive Officer Roberto Tapia-Conyer said in a phone interview.

And if the U.S. taxpayers aren’t going to pony up for these Mexicans, who is? We all know Mexico is an extremely poor country, so nobody in Mexico could possibly have any spare wealth to use to help his fellow countrymen in any fashion, other than by dumping them on Uncle Sam.

“This is a population of great potential, and our goal is to reduce the access barriers for them to reach this potential,” Tapia-Conyer said. “We want to incorporate them to the formal workforce, to build not just them but their families, so they’re able to contribute to the economy.”

And afford to make lots and lots of phone calls home to Mexico, which Carlos Slim will make available to them at a markup only several times that seen in countries without private telecom monopolists.

Some academics who have studied Mexico say that this resource rich, climate-blessed country actually ought to be prosperous, if only politically-connected oligarchs weren’t squeezing it dry by, for example, charging small businesses outlandish monopoly fees for telecommunications.

Slim, the son of a Lebanese immigrant to Mexico, amassed his fortune by recognizing the depressed value of assets during the country’s financial crisis in the 1980s.

If only you’d been such a sharp-eyed analyst, you too could have bought the Mexican government’s telecom company from President Salinas for pennies on the peso in a completely transparent arm’s length transaction. Don’t you remember the auction that the Mexican government held live on global satellite television? 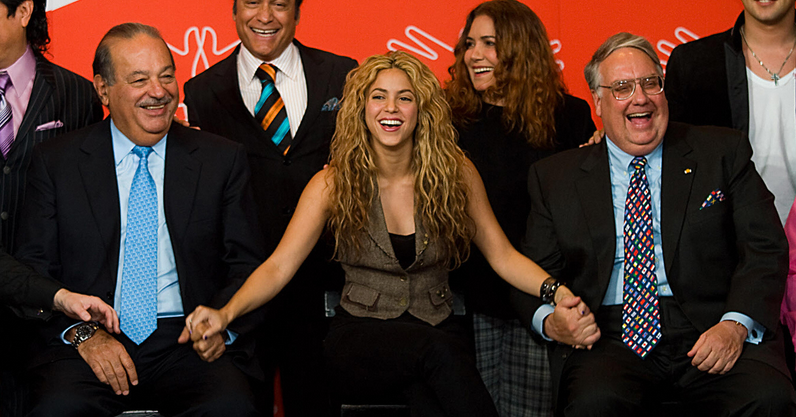 He acquired control of former state monopoly Telefonos de Mexico in a 1990 privatization, helping propel him to the echelons of the world’s richest, trailing only Bill Gates with a fortune of $79.2 billion, according to the Bloomberg Billionaires Index.

While most of his wealth comes from his companies in Mexico, Slim has investments in the U.S., including the nation’s biggest prepaid phone provider, TracFone, and a minority stake in New York Times Co.

It takes a lot of guts to stand up to the nativist media when you’ve only got the New York Times in your hip pocket.