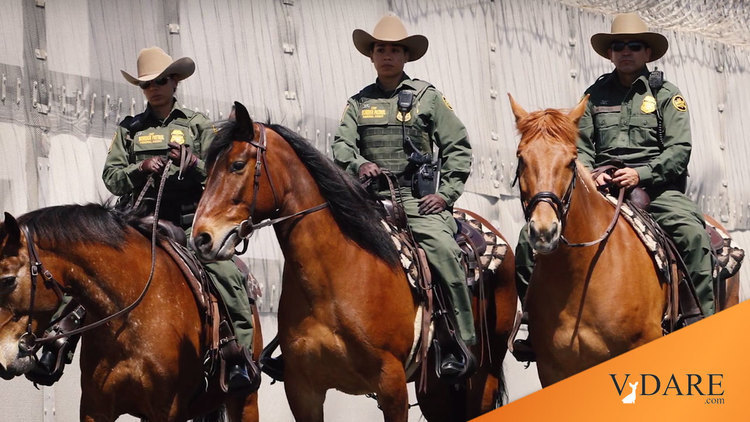 The anti-American kritarchs who rule us recently upped the ante, revealing that constitutional rights now not only apply to aliens, but even apply to aliens outside the United States. Worse, the effect of this decision is to give the official seal of approval to acts of violence against Border Patrol agents and any other Americans foolish or idealistic enough to believe that enforcing the law still matters to our federal government. The war against America is escalating—and the courts don’t care if law enforcement personnel become the literal casualties.

The Fifth Circuit Court of Appeals opened the door to this terrifying possibility when it ruled that a Mexican teenager killed by Border Patrol agent Jesus Mesa “was protected by the U.S. Constitution, even though the teen was on Mexican soil when he was shot.”

This means, of course, that the Hernandez family, and their gangster treason tort plaintiff attorneys, can sue agent Mesa and possibly the U.S, government:

U.S. District Judge David Briones [a Clinton appointee] had found in 2011 that the family could not sue because the shooting’s effects were “felt in Mexico.” But the appeals court said that such a “territorial approach” would allow agents to establish “zones of lawlessness.” It “would establish a perverse rule that would treat differently two individuals subject to the same conduct merely because one managed to cross into our territory,” the appeals court ruling says. It also says that giving people standing on Mexican soil protection from “conscience shocking” actions by border agents, such as the shooting of Hernandez Guereca, is not a new policy. Immigrants that are inside the U.S., even those who are to be removed from the country, “are entitled to feel free of gross physical abuse by federal agents,” it says. Extending that right to people injured across the border by U.S. agents standing on U.S. soil, would inform the officials that they are not allowed to arbitrarily inflict harm in this “new, but similar, context,” the court said [Court: Mexican Teen Shot By Border Patrol Protected By U.S. Constitution, by Juan Carols Llorca, Associated Press, June 30, 2014]

The decision [PDF]   by a three-judge panel, was authored by Judge Edward Prado, a Texas Hispanic “moderate” appointed by the appalling George W. Bush.

Meanwhile, back in the real world, even the AP article acknowledges that the Border Patrol agent argues he fired in self-defense after being attacked by rock throwers. But the Obama Regime has already done its best to make sure Border Patrol agents can’t defend themselves from physical attack. And the Mexican government, which refuses to secure its side of the border and de facto supports the attacks, welcomed the decision. [Mexico Hails U.S. Court Decision Opening U.S. Border Patrol Up to Lawsuits in Cross-Border Shootings, by John Stanton, Buzzfeed, July 1, 2014]

The Obama Regime is eagerly exploiting these decisions. It is seeking to destroy Border Patrol Agents like Jesus Mesa in the same manner as it persecutes Ferguson Police Officer Darren Wilson. [Meet the Radical DOJ Unit Investigating Ferguson Shooting, by J. Christian Adams, PJ Media, August 20, 2014]. And this writer can personally attest to the freely expressed contempt and hatred that DOJ Civil Rights Division attorneys have towards law enforcement officers.

Now, the Appeals Court has opened the door to a flood of lawsuits, some of which have already been filed. [Mexican family files suit accusing U.S. agents in border death, by Jon Herskovitz and Mica Rosenberg, Reuters, August 27, 2014]

And the Justice Department is launching at least two investigations over another shooting, that of alleged rock-thrower Jose Antonio Elena Rodriguez. As the far-Left site Buzzfeed coos:

[Customs and Border Protection] and in particular the Tucson Sector in Arizona, use of force against undocumented immigrants and Mexican citizens inside their home country has come under increasing scrutiny over the last year, and the investigations come on the heels of a federal civil lawsuit filed by the family of a 16-year-old Nogales, Mexico, boy who was killed during a cross-border shooting by CBP. [Justice Department Civil Rights Division Investigating Arizona Border Patrol Shootings, by John Stanton, Buzzfeed, August 24, 2014]

Needless to say, Jose Antonio Elena Rodriguez’s family is also suing—thanks to this recent decision by the Fifth Circuit.

Rodriguez's lawsuit comes less than a month after a federal appeals court ruled that the family of another Mexican teen, killed in Ciudad Juarez in 2010, has the constitutional right to sue the Border Patrol agent who shot him across the border. That ruling, by the 5th Circuit Court of Appeals, was the first nationally to determine that the family of someone shot in Mexico by agents firing from U.S. soil has the right to sue in this country. "That is an important precedent for our case," said Luis Parra, one of the attorneys representing Araceli Rodriguez. [Mother of dead Mexican teen sues Border Patrol, by Bob Ortega, Arizona Republic, July 29, 2014]

The Rodriguez family attorney even admitted that he thinks Border Patrol agents should simply submit to being attacked:

"I'm not saying it's a clear case of excessive force, but it is a very strong case for excessive use of force," Parra said. "The Border Patrol agent who was firing could have easily taken cover." [Emphasis added] [Border Patrol Agent Shot Mexican Teen Jose Antonio Elena Rodriguez 8 Times: Autopsy, by Brian Skoloff, Huffington Post, February 8, 2013]

Of course, law enforcement officers are not supposed to retreat or “take cover” when they are attacked. They are supposed to do their job—and that means fighting back against criminals attacking them.

The real purpose of these court rulings and lawsuits: to make it impossible for the Border Patrol to enforce immigration law.

Those officers who continue to perform their jobs will either be killed in the field or destroyed through the courts—with the gleeful approval of the Obama Regime.

Illegal immigrants, drug smugglers, and the Mexican government can rest easy knowing they have a great ally at 1600 Pennsylvania Avenue.

After all, now that illegal aliens residing in a foreign nation apparently possess U.S. Constitutional rights, there is little rationale to deny them other “rights”—such as entering the country, employment, voting, or anything else that an Obama-appointed judge feels like inventing.

The result: abolition of the border and citizenship as meaningful concepts—and the end of American identity itself.

But of course, that’s a feature, not a bug.

Abolishing America is the whole point.