Is Burger King an Economic Patriot? 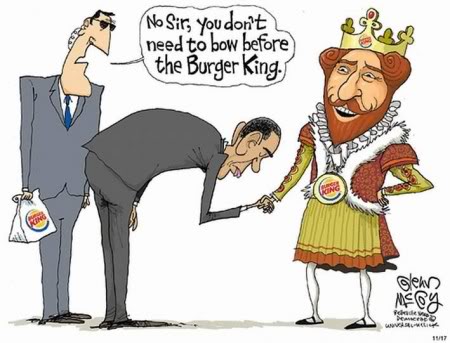 "Merchants have no country. The mere spot they stand on does not constitute so strong an attachment as that from which they draw their gains."

Jefferson's brutal verdict comes to mind in the fierce debate over inversions, those decisions by U.S. companies to buy foreign firms to move their headquarters abroad and renounce their U.S. citizenship — to evade the U.S. corporate tax rate of 35 percent.

U.S. executives who engineer these inversions are undeniably acting in the best interests of their shareholders and companies.

But are they also lacking in economic patriotism? Are they also guilty of economic treason against the nation that nurtured them?

Are they, in the phrase tossed out by Barack Obama, "corporate deserters"? Adds our president, "I don't care if it's legal, it's wrong."

But are inversions wrong? Or are these relocations abroad neither more nor less moral than Boeing's decision to save hundreds of millions in labor costs by shifting 1,300 engineering jobs out of Seattle and Southern California to St. Louis, Charleston and Huntsville?

Is it morally permissible to leave your home state or region for economic reasons — as the textile mills left New England for the South — but unpatriotic to leave the land of your birth?

If so, was it not unpatriotic for the U.S. Chamber of Commerce and Fortune 500 to lobby for NAFTA and GATT so companies could shutter their factories here, lay off their U.S. workers, and move their production to Mexico and Asia?

Was it not unpatriotic of Congress and Presidents Clinton and Bush to facilitate the departure of tens of thousands of plants and millions of manufacturing jobs?

Where were the economic patriots then?

What has concentrated the mind here is the decision by Burger King, backed by shareholder Warren Buffett, to buy Tim Hortons in Canada. Burger King will move its headquarters to Canada, declare itself a Canadian company, and begin paying the Canadian corporate tax rate of 26 percent.

Ireland, with its 12.5 percent corporate income tax has proven a particularly attractive residence for companies shopping for lower tax rates. Before this year, Apple had used Ireland as a tax haven to shelter $40 billion in revenue.

Britain, too, has proven a magnet. U.S. pharmaceutical giant Pfizer made a $118 billion bid this year for AstraZeneca so it could move its tax domicile there, but was rebuffed by the target company.

Forty-nine U.S. companies have completed tax inversions. Twenty more are looking at them. The prospect that a lame duck Congress may take up legislation to end the practice and stanch the bleeding of tax revenue from the U.S. Treasury could cause a stampede.

Treasury is talking of a December law, made retroactive back to May, to strip the tax benefits from inversions. The prospect that the loophole may disappear could accelerate corporate flight out of the high-tax USA.

Some $2.1 trillion in corporate profits, subject to U.S. taxation, is already being held abroad, parked, and not repatriated, lest the holders get hit with the U.S. tax rate. Some U.S. companies are borrowing these funds from abroad and deducting the interest payments.

At bottom, the inversions issue is not only about corporate tax rates and competitiveness, but also about loyalties in conflict.

Actor Gerard Depardieu renounced his French citizenship rather than pay the 75 percent income tax rate imposed by the Socialist regime of Francois Hollande. Though denounced, was Depardieu being disloyal to France, or to the Hollande regime and its socialist ideology?

Can one love one's country and hate its government?

In 1776, that was surely true of Jefferson, Adams, Hamilton and Washington. And their rebellion had something to do with taxation.

Are New York City cops and civil servants who retire and take their pensions to Florida being disloyal to the Empire State because they want to stop paying the 12 percent state-local income tax bite?

When states like Texas eliminate corporate income taxes, are they engaged in beggar-thy-neighbor politics against fellow states of the Union?

"Taxes are what we pay for civilized society," said Justice Oliver Wendell Holmes Jr. But is Ireland less civilized than America because her corporate tax rate is one-third of ours?

Judge Learned Hand had another take:

"There is nothing sinister in so arranging one's affairs as to keep taxes as low as possible. Everybody does so, rich or poor; and all do right, for nobody owes any public duty to pay more than the law demands: taxes are enforced exactions, not voluntary contributions. To demand more in the name of morals is mere cant."

To our transnationalists, Judge Hand got it right.

But whether one is an economic patriot or a libertarian, to keep the U.S. corporate tax rate at the highest level in a global economy of ferociously competitive nations would appear to reflect the thinking of an incorrigibly stupid and stubborn government.