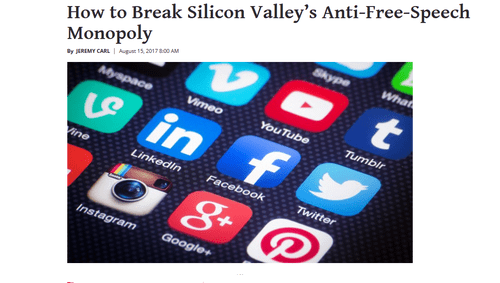 Today, I want to talk about how the conservative movement needs to grow up when it comes to considering questions of power. Conservatives know they are supposed to oppose “big government,” although the details on that are pretty vague. For instance, see their various interpretations on government expansion as a result of foreign wars. But more importantly, conservatives are blinkered when it comes to how private concentrations of power have major public consequences.

Sometimes, it’s hard to draw the line between where the quote, “state” ends and the quote, “private” sector begins. And that is especially true when it comes to technology companies.

Let’s start with a historical truth—the Internet was at least partially created through government action. Just like you can’t realistically “build another highway system” or “bury another network of pipelines,” you can’t just “create a new Internet” to introduce competition. There are certain platforms that by their very nature become common carriers or natural monopolies. There is a strong case to be made that major web services such as Facebook, Google, YouTube, and Twitter should be treated this way.

A column appearing, of all places, National Review conceded this point. Jeremy Carl of the Hoover Institution wrote, quote:

We need to make sure that these monopolies and platforms — which have been shielded with their privileges, such as the Safe Harbor provisions of the 1998 Digital Millennium Copyright Act — respect the free speech of all Americans, not just those who agree with them…

Facebook, Google, and their ilk are indeed utilities, utilities that deliver public benefits and not just private ones. It’s time for Congress and the Trump administration to start treating them that way.

Some people have tried to build competition to even the playing field. But they get shut down from companies even higher on the food chain. Gab, for example, is the free speech competitor to Twitter. Yet Gab was threatened with being shut down altogether by their host service, Microsoft. Needless to say, most media outlets, which seem to really hate free speech, cheered this, with one article entitled, Microsoft threatened to stop hosting the alt-right’s favorite social network. [by Simone Stolzoff, Quartz, August 10, 2018]

And even if a competitor secured their own domain hosting, well, then they’ll shut down its ability to process credit cards. That’s what happened to both David Horowitz and Robert Spencer, and though their ban was eventually reversed, it’s likely to get worse before it gets better. There is an active campaign to get Stripe and other payment processors to stop working with patriotic groups altogether. What then, start an independent bank?

There are even digital book burnings now. Amazon recently purged several books by Roosh Valizadeh, again because of active lobbying by media, in this case, the Huffington Post, which duly bragged about their triumph [Exclusive: Amazon Removes 9 Books by Notorious Rape Apologist ‘Roosh’ by Sebastian Murdock and Jesselyn Cook, September 10, 2018]. It’s not that we need to defend Roosh, it’s that a  horrible precedent has been set. There’s content far more objectionable than Roosh on Amazon. Why isn’t all that banned?

We are reaching critical mass of censorship here. Life in America is rapidly approaching a corporate dictatorship. What makes this all the more infuriating is that the same companies using oppression as a virtue signal treat their workers terribly. [Tucker Carlson to Amazon, Walmart CEOs: At a certain point, you’ve made enough money, by Becket Adams, Washington Examiner, August 31, 2018] It’s the worst of both worlds.

Conservatives need to start mobilizing. We need start taking on corporate tyranny, rather than apologizing for it—ESPECIALLY instead of just giving our oppressors another tax cut. If we don’t, for all intents and purposes real free speech won’t exist in this country, and the First Amendment will be meaningless.