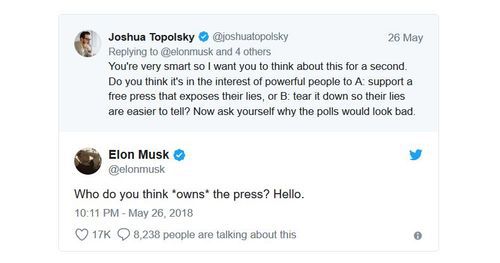 VDARE Radio: Journalists Can Dish It Out But Can’t Take It

We need people like Elon Musk. Do we need journalists?

We’ve written about Elon Musk before at VDARE.com. He’s the entrepreneur and innovator who has started a number of companies, notably the space delivery company Space X and Tesla. He’s an African immigrant—though the wrong kind of African, white South African. So he’s never really been a media favorite, and his companies are often under attack for not having enough racial diversity.

Musk, like so many others, is frustrated about his treatment at the hands of the media. He recently mused about the idea of creating a website to track the credibility of journalists.

Let me read a couple of his recent tweets to you:

The holier-than-thou hypocrisy of big media companies who lay claim to the truth, but publish only enough to sugarcoat the lie, is why the public no longer respects them https://t.co/Ay2DwCOMkr

Going to create a site where the public can rate the core truth of any article & track the credibility score over time of each journalist, editor & publication. Thinking of calling it Pravda …

Journalists responded with outrage. They reacted as if they had suffered lèse majesté, as if no one was allowed to criticize journalists. They were especially angry when one journalist said the media serves as a check on powerful people and Musk responded, “Who do you think “owns” the press? Hello.”

Who do you think *owns* the press? Hello.

Reporters promptly erupted and started saying Musk was being anti-Semitic. That’s on them. Elon Musk was obviously saying journalists are paid by powerful people and serve the interests of those powerful people. This is obviously true.

It’s absurd to pretend journalists speak truth to power. They speak power to truth. Much of what journalists do these days consists of attacking ordinary people with slightly unorthodox opinions and trying to destroy them. Remember CNN doxing the guy who created a meme and then bragging about it? [How CNN found the Reddit user behind the Trump wrestling GIF, by Andrew Kaczynski, CNN, July 5, 2017].

Journalists spend most of their time writing hit pieces designed to get shows taken off the air, political donations withheld, or, an especially sore spot for us at VDARE.com, conferences cancelled. They create fake controversies, gin up phony outrage, or simply emote at us. They don’t really inform us at all.

In response to Musk’s “who owns the press” tweet, journalists tried to create a phony controversy. One journalist, Erin Baba, attacked Musk because people on Twitter made mean comments to her as a result of the online dispute. [What it’s like when Elon Musk’s twitter mob comes after you, by Erin Biba, Daily Beast, May 28, 2018] Musk was thus faulted for the behavior of anonymous people on Twitter—you might call it guilt by non-association.

Many journalists seemed to act as if Musk was the aggressor in all of this, when what journalists were trying to do was create a casus belli for a pressure campaign against Musk’s businesses, with the intent of utterly destroying him. Yet despite being the aggressors, Biba and others are acting like victims, simply because they received mean tweets.

Immigration patriots don’t just receive abuse online, but are constantly under threat of physical attack. No one defends us. The press, if anything, encourages this kind of behavior. A journalist complaining about being a target shows a lot of chutzpah considering how reporters spend their time attacking people.

There is no greater threat to the economic or physical well-being of the average person, than a journalist.

Consider what the Daily Beast did only a few months ago. Journalist Taylor Lorenz decided to dox the daughters of anti-Shariah campaigner Pamela Geller. Geller’s daughters had become Instagram stars and never discussed politics or anything controversial on their accounts. Their mother has also been the subject of terrorist attacks, notably that of a gunman in Texas only a few years ago. Nonetheless, Lorenz decided to dox and humiliate the daughters, not only destroying their careers, but also endangering their lives. Apparently, even being related to someone the media doesn’t like means you should have your life completely destroyed and be put at risk for violent attacks [The Instagram Stars Hiding Their Famous, Muslim-Hating Mom, Pamela Geller, by Taylor Lorenz, Daily Beast, February 28, 2018] Actions like this have a far greater impact than simply receiving some mean tweets.

Or consider what the Daily Beast is doing right now, trying to get a reality show contestant fired from his show because he indicated “like” the wrong thing on social networking.

A recent headline of theirs reads, quote:

ABC canceled "Roseanne." What will they do about their alt-right "Bachelorette" contestant?

And it goes on to say, quote “internet sleuths have found that current Bachelorette contestant Garret Yrigoyen has a history of liking transphobic, anti-immigrant, and alt right conspiracy theories posts.” endquote

ABC canceled "Roseanne." What will they do about their alt-right "Bachelorette" contestant? From @ahzimm https://t.co/00e35o5dhM

Really, what this is about is that journalists want a monopoly on the right to harass, or even criticize. Sometimes called the Fourth Estate, journalists really do believe they are part of separate social order that exempts them from disapproval.

They are not supporters of free speech. They are its greatest enemies.

What can we do about this? Elon Musk’s idea is a good one, but that’s not the real problem right now. The real problem is that search engines shadow ban alternate viewpoints, that conference venues are intimidated from hosting conferences, that online fundraising platforms deny service to companies and that social networking companies are skewing news coverage. To even talk about “freedom of speech” in such a climate is rather meaningless.

What is really needed is someone to create ways for dissidents to process online payments, host conferences, have bank accounts, and generally enjoy access to services every other person can take for granted. Given an equal playing field, we can defeat the Fake News media. And then we can have a country fit for heroes again, one that will, with people like Elon Musk leading the way, conquer the stars.