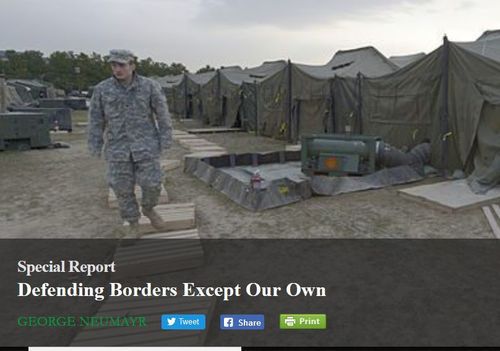 VDARE Radio: No Money For Walls, But Plenty For War?

I’m Virginia Dare and this is VDARE Radio.

As I’m recording this, tensions are rising between Russia and the United States over Ukraine. US Ambassador to the United Nations Nikki Haley is demanding Russia withdraw from Ukraine, and, quite absurdly, give back Crimea. [Haley calls on Russia to withdraw from Ukraine, by Laura Koran, CNN, May 29, 2018] The latter is a demand Vladimir Putin can’t possibly agree to. It simply increases the chances of a pointless confrontation, this time with a major nuclear power. Of course, all this is also happening against the background of demands for “regime change” in Syria and Iran. [Regime change in Iran could cost the US trillions, by William Hartung, CNN, May 24, 2018]

We’ve been here before of course. We were told Iraq had weapons of mass destruction and we needed to invade. They didn’t and what we accomplished after spending trillions of dollars is unknown.

We helped overthrow the government of Libya, which helped kick off the European refugee crisis. One wonders if flooding Europe with Muslims was a feature, not a bug, for the ruling elites who were so determined to foment regime change in Tripoli.

Now, we are saying America needs to do something to expel Russia from Crimea, against the wishes of that peninsula’s inhabitants.

But there’s something here that is being just completely overlooked. “The sinews of war are unlimited money,” said Marcus Tullius Cicero. Even if President Trump does something extremely limited, like fire off some missiles, it represents hundreds of millions of dollars. Even the most limited of conflicts, even just posturing, is an extraordinary expense for our country.

What makes this truly despicable is that the Republicans in Congress, who have done very little with their united control of the government, have told us all along we can’t build President Trump’s border wall because we supposedly can’t afford it. [Texas GOP rep blasts wall as expensive, ineffective, by Rebecca Savransky, The Hill, January 26, 2017] Even more absurdly, some of the Democrats, like Chuck Schumer, are making the same argument. [Defending Borders Except Our Own, by George Neumayr, American Spectator, April 11, 2018] Yet few have any problem with spending billions or trillions in wars overseas.

Of course, one easy way to get around the problem of funding the wall is to “have Mexico pay for it,” by implementing the remittance tax advocated during the 2016 campaign.  But let’s ignore that for now. What about just showing some restraint in our foreign policy?

According to a 2013 estimate, the decade long effort in Iraq cost $1.3 trillion. The benefits mandated to veterans of the war could add up to trillions more over the next 40 years. Think of what we could have done with that money. A border wall, which would pay for itself in how it would prevent crime and illegal immigration, would be just the beginning. As far as how much the war in Afghanistan is costing us, we still can’t say, because it is still going on.

It’s really a question of priorities. When it comes to these foreign policy interventions, the question of how to pay for it never seems to come up. Our government just assumes we have unlimited resources. Yet when it comes to defending our own country, suddenly everyone is a miserly accountant, demanding everything be done on the cheap or not be done at all. The only possible conclusion is that our Congress is far more concerned with protecting the borders of nations other than our own. Forget America First, I don’t think America enters into their calculations at all.

President Donald Trump was elected as a rebuke to this kind of thinking. The American people, and especially those who voted for him, are tired of seeing their sons and daughters die in foreign adventures for unclear objectives while our own homeland is left completely undefended. And Americans are tired of hearing excuses about how the federal government doesn’t have the resources to fulfill its basic responsibilities, yet somehow has enough money to play Lawrence of Arabia for another decade. To paraphrase a slogan from our earliest days as a nation, our policy seems to be, “Millions for foreign wars, but not one cent for defense.”

We’ve been through Iraq and Libya. We’re still in Afghanistan. If we embark on “regime change” in Syria or Iran, we know how this movie ends. It’s time to defend our own country before we go abroad looking for monsters to slay. It can’t just be a slogan. It’s time for America First.

Assuming the neocons don’t get us all killed, I’m Virginia Dare and we’ll talk again soon.