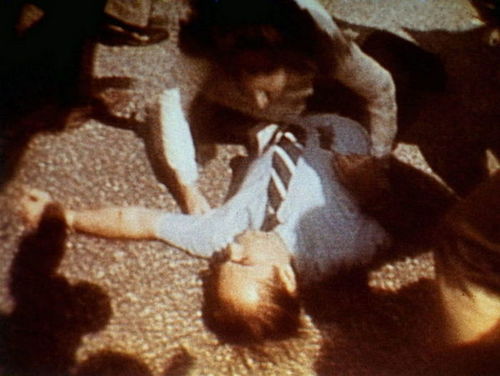 Earlier this month in The Trump Wrecking Ball, The Washington Cartel, And The Jews VDARE.com editor Peter Brimelow remarked

Donald Trump has come under intense attack for his stance on immigration. But, for those who remember, it is significantly less intense than the barrage that met Pat Buchanan when he ran for President. One obvious but unspoken reason for this: Trump simply has not riled up the organized Jewish community as much—yet.

But can it last? I would say no. The blind commitment of American Jews to the post-1965 policy of mass immigration, alas, has proved (with notable exceptions) at least as strong as their commitment to Israel.

Plenty of evidence has subsequently appeared to indicate Peter is right, not least the ramshackle smear attempt by an MSM Princeling and ethnic particularist discussed today by Jared Taylor in NEW YORKER’S Evan Osnos Learns Nothing—His Article About Trump Supporters One Long Sneer

But to my mind quite the most extraordinary specimen was reposted yesterday by ZeroHedge as Guest Post: Is Trump Worse Than Hitler? By James H. Kunstler,  August 24, 2014. This was first posted on Kunstler’s own site with the significantly different headline Worse Than Hitler

Basically this essay is deranged. It starts with a stratagem popularized by the Neoconservatives, ingratiatingly and fluently stating the concerns of the target audiences:

Immigration is a practical problem, with visible effects on-the-ground, easy to understand. I’m enjoying the Trump-provoked debate mostly because it is a pushback against the disgusting dishonesty of political correctness that has bogged down the educated classes in a swamp of sentimentality. For instance, Times Sunday Magazine staffer Emily Bazelon wrote a polemic last week inveighing against the use of the word “illegal” applied to people who cross the border without permission on the grounds that it “justifies their mistreatment.” One infers she means that sending them back where they came from equals mistreatment.

It’s refreshing that Trump is able to cut through this kind of tendentious crap.

But then it collapses into a series of subjective complaints about Trump (including 'the wolverine that lives on top of his head...'), charmingly concluding

World leaders considered Hitler a clown in the early going, too, you know. But the Germans were wild about him. He pushed a lot of the right buttons under the circumstances. Trump is worse than Hitler. And the American people, alas, are now surely a worse lot of ignorant, raging, tattooed slobs than the German people were in 1933. Be very afraid.

While Americans are entitled to be offended by what people like James H. Kunstler think of them, what bothers me about the piece is a remark higher up:

The thought of Trump actually getting elected makes me wonder where Arthur Bremer is when we really need him.

Arthur Bremer of course is the man who shot George Wallace in 1972, wrecking the most extraordinary campaign surge before Trump’s. Given the vitriolic style of the rest of the piece it is not possible to excuse this as a joke.

ZeroHedge in my opinion is worth more than the rest of the financial media put together and they have been steadily improving from a VDARE.com perspective as well. I am astonished they should publish this endorsement of assassination. Perhaps the sub editor was too young to catch the Bremer reference.

I hope The Donald has good security. He needs it.