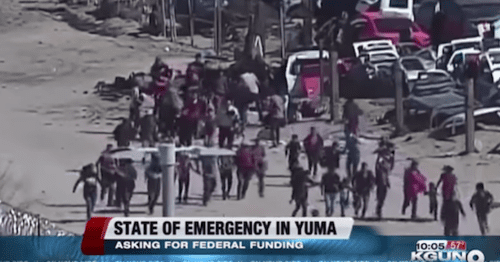 The hordes of illegal aliens flowing across America’s open border are having an effect. A mayor in the southern Arizona town of Yuma says his community is overwhelmed. So many have come that shelters have been overflowing and the foreigners are “roaming the streets” which must be frightening to residents just trying to go about their lives.

Is this how a “nation of laws” protects its citizens? 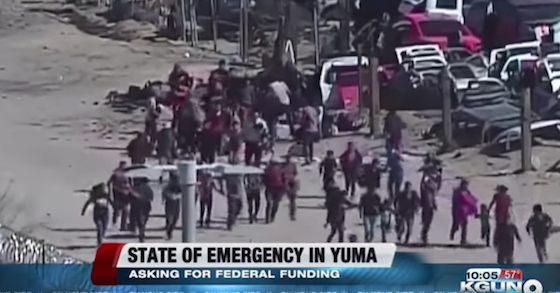 Fox News’ William La Jeunesse noted that on Tuesday the Border Patrol apprehended 399 Central Americans as they walked across from Mexico over an open space near neighboring Lukeville — a record number.

The Yuma mayor was quoted in a Washington Times article:

Yuma, a city on the U.S.-Mexico border in Arizona, declared a state of emergency Tuesday, saying it cannot handle the crush of illegal immigrants the government is being forced to release onto its streets.

Mayor Douglas Nicholls said the migrants are being released by the Border Patrol into his community faster than they can leave, and local shelters are already at capacity.

He warned of mobs of people “roaming the streets looking to satisfy basic human needs,” clashing with citizens looking to protect their own property.

“There is an imminent threat on having too many migrant releases into our community,” he said. “It’s above our capacity as a community to sustain.”

The move was designed to draw the attention of the country to what locals said was an untenable situation and to beg for solutions from the federal government, which has been at a political stalemate over what to do.

Mr. Nicholls said he is trying to get other Arizona communities to issue similar declarations, hoping a critical mass of voices will cut through the partisan gridlock.

The migrants are overwhelmingly families and unaccompanied children from Central America. They are fleeing rough conditions at home and are drawn north by lax enforcement policies that virtually guarantee they can be quickly released into communities, where most disappear into the shadows.

Of the children and families that came in 2017, more than 98% were still in the U.S. as of the beginning of this year. (Continues)