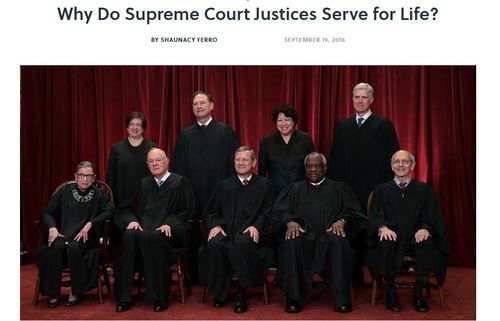 The Sailer Plan For Reforming the Supreme Court—22 Year Terms

Every time there is a hoop-tee-do over a Supreme Court nominee, I trot out my old structural reform suggestion for lowering the stakes.

The way to reform the Supreme Court nomination process is to increase the number of justices from 9 to 11 in the long run, and each new justice gets a single, non-renewable 22-year-term.

Win a presidential election and you get to nominate two justices. That’s fair. And you don’t have to pick extra young ones or Colorado joggers or whatever, just somebody in his or her prime who looks likely to last 22 years. The typical nominee would likely be in his or her early 50s and retire around 75. This would reduce spectacles like Justice Ginsburg trying to outrun the Reaper.

During the transition era, current justices would continue to serve their lifetime terms. This means that the Supreme Court would initially have fewer than 11 justices and then might for awhile have more than 11 while the current justices haven’t died or retired, but eventually things would shake out to 11. (During 2016 and early 2017 the Supreme Court only had 8 justices, and it wasn’t the end of the world.)

To deal with the issue of potential corruption stemming from not having lifetime terms, justices would get $1 million per year lifetime pensions, with strict rules against other sources of post-retirement income.

If a justice died or retired before the end of a 22-year term, the current president would nominate somebody to complete the 22-year term, but the replacement justice would not be eligible for renomination.

This should not take a constitutional amendment, since the number and term of Supreme Court justices is not specified in the Constitution.
[Comment at Unz.com]