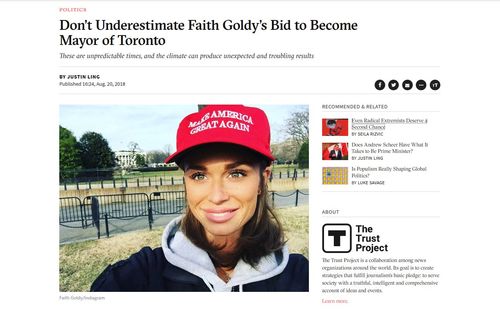 The "Don't Underestimate Faith Goldy" piece pictured above is actually a hit piece—the reason given for not underestimating Ms. Goldy is that a fringe character was almost elected Mayor of Toronto in the mid-70s, this being the kind of attack that worked so well in beating Trump.

But Faith Goldy's campaign for Mayor of Toronto is quite serious, despite a virtual blackout of MSM coverage:

Toronto has become more multicultural, with a concomitant increase in crime. At the same time, political correctness (and Canadian PC is worse than American) have led to restrictions on policing: