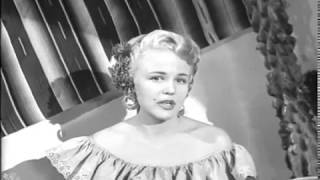 Mark Steyn has a reminiscence of Peggy Lee, who died five years ago yesterday, and I found this little note in the middle of it:

The novelty number they'd recorded a week earlier—Manana—was Number One for nine weeks in 1948....

The song, featuring a Spanish accent and a theme of procrastination, is likely to either give offense, or be suspected of giving offense, which will trigger politically correct reflexes. (The Manana stereotype may have some accuracy in it—according to Mexicans and Americans: Cracking the Cultural Code, By Ned Crouch, when you're told in Mexico that something will be available "Manana" it doesn't mean it will be available "tomorrow," it simply means "not today.") Speedy Gonzalez was brought back from politically correct oblivion, because Hispanics missed him.

The window she is broken and the rain is coming in,

If someone doesn't fix it I'll be soakin' to my skin,

But if we wait a day or two the rain may go away,

And we don't need a window on such a sunny day!

is a direct steal from story of The Arkansaw Traveller whose cabin didn't leak when it didn't rain. (He was a white fellow, with a fiddle rather than a guitar.)