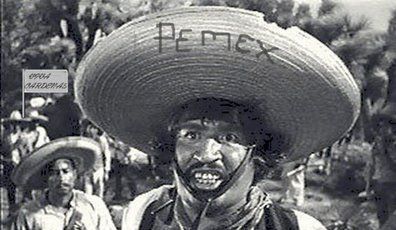 Thomas Sowell has an article saying that oil companies aren't necessarily evil, in which he says, among other comments:

"Now that oil prices have dropped big time, does that mean that oil companies have lost their 'greed'? Or could it all be supply and demand — a cause and effect explanation that seems to be harder for some people to understand than emotions like 'greed'?"

But Mark In Mexico has a post about one company that doesn't really underestand supply and demand—the only oil company in North America that may be running out of oil: PEMEX.

Pemex was formed after 1938 when President Lázaro Cárdenas nationalized Mexico's oil industry. When a government nationalizes its oil industry, that means that the government steps in and confiscates all of the equipment, drills, pumps, buildings, refineries, vehicles, ships, airplanes, offices, records, bank accounts etc. of the private companies to which that same government had previously sold leases and other rights.

In other words, the government sells licenses to various foreign investors to attract them to invest billions of dollars, then steps in and steals it all. In almost all cases, the government blames the foreign companies, and often the foreign governments, for "robbing" the people's energy inheritance. Except, of course, when a US company is involved, in which case the local government always blames the US government.

And, frequently, America gets blamed even when there are no US companies involved at all. In Bolivia, the Bolivian Gas War was brought on by a minority group's charge that the United States was absconding with the Bolivian people's natural gas inheritnce. But the companies that had extraction rights are all European companies. If an American energy company wanted Bolivian gas, it had to buy that gas from and pay market prices to a European energy company that was extracting that gas. Oh well.

These governments have, year after year and decade after decade, used Pemex as a private funding source. It is estimated that Pemex loses a cool billion dollars a year just to internal corruption.

All of that corruption has little to do with oil extraction or oil availability or oil reserves. What it does do however, is cause gasoline at Pemex gas stations — the only ones allowed here — to cost the Mexican consumer about $1.00 per gallon more than that same oil costs once it is shipped to the United States. At an Exxon station in Laredo, Texas, you pay $1 per gallon less for gasoline than you do at a Pemex station just a couple of miles to the south. And that's for gasoline produced from oil from the same Mexican well.

What that corruption also does is bleed money away from Pemex that should have been reinvested in the company. That loss, along with the Mexican government's skimming off 60% of all Pemex revenue to pay for all the sub-standard public services that the bloated Mexican constitution guarantees to the Mexican citizens, leaves no money for exploration or drilling for new sources or the technology development necessary to tap those new sources nor even enough to maintain its existing facilities.

I've noted that earlier that Mexico has a public holiday celebrating

the biggest armed robbery of the twentieth century. It left all the oil in Mexico in the hands of corrupt Mexican governments, who couldn’t even get most of it out of the ground; a lot of it is just sitting there, because they won’t allow foreigners to touch it.

See Businessweek's 2001 article Pemex: Still in the Dark Ages, for a discussion of how Mexico doesn't want to have Americans exploit Mexicans by drilling wells, which means fewer jobs for Mexicans, who go north illegally and exploit Americans.