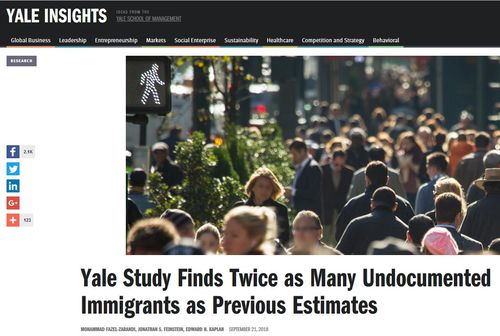 I wrote about this research back on January 18, but now it’s finally gone public. From Yale Insights:

… But a paper by three Yale-affiliated researchers suggests all the perceptions and arguments based on that number may have a faulty foundation; the actual population of undocumented immigrants residing in the country is much larger than that, perhaps twice as high, and has been underestimated for decades.

Read the study: The Number of Undocumented Immigrants in the United States: Estimates Based on Demographic Modeling with Data from 1990 to 2016

The results, published in PLOS ONE, surprised the authors themselves. They started with the extremely conservative model and expected the results to be well below 11.3 million.

“Our original idea was just to do a sanity check on the existing number,” says Edward Kaplan, the William N. and Marie A. Beach Professor of Operations Research at the Yale School of Management. “Instead of a number which was smaller, we got a number that was 50% higher. That caused us to scratch our heads.”

Jonathan Feinstein, the John G. Searle Professor of Economics and Management at Yale SOM, adds, “There’s a number that everybody quotes, but when you actually dig down and say, ‘What is it based on?’ You find it’s based on one very specific survey and possibly an approach that has some difficulties. So we went in and just took a very different approach.”

The 11.3 million number is extrapolated from the Census Bureau’s annual American Community Survey. “It’s been the only method used for the last three decades,” says Mohammad Fazel‐Zarandi, a senior lecturer at the MIT Sloan School of Management and formerly a postdoctoral associate and lecturer in operations at the Yale School of Management. That made the researchers curious—could they reproduce the number using a different methodology?

The approach in the new research was based on operational data, such as deportations and visa overstays, and demographic data, including death rates and immigration rates. “We combined these data using a demographic model that follows a very simple logic,” Kaplan says. “The population today is equal to the initial population plus everyone who came in minus everyone who went out. It’s that simple.”

Notably, the upper bound of the traditional survey approach, which also produces a range, doesn’t overlap with the lower bound of the new modeling method. “There really is some open water between these estimates,” Kaplan says. He believes that means the differences between the approaches can’t be explained by sampling variability or annual fluctuations.

There are key areas of agreement between this paper and the existing survey numbers. Both methods found that the greatest growth of the undocumented population happened in the 1990s and early 2000s. Both found that the population size has been relatively stable since 2008.

I don’t have a strong opinion on whether the Pew estimate or the Yale estimate is more statistically valid. I do have an opinion on the meta-issue. As I wrote in January:

Knowing how many people live in your country is something that governments have undertaken to find out for over two thousand years. There are at least three censuses mentioned in the Bible, two in the Old Testament. For the U.S. government to not know within an 8 digit number, because illegal aliens are considered sacred and mysterious, is nuts.

Obviously, whatever the number is, it’s extremely relevant to policy issues like amnesty. And yet for many years we’ve been stuck with just the Pew number because our country’s establishment has a negligent attitude about illegal immigration: Don’t study it too hard because you might find out something the Deplorables will find interesting.