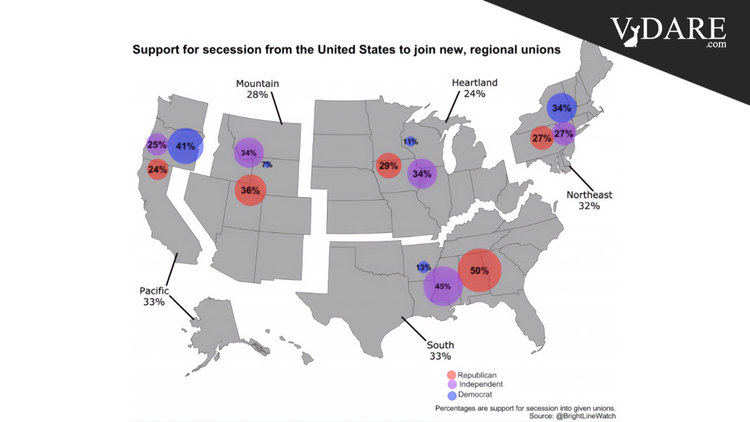 Dissolution For The Diversity: The Whiter The Region, The Less Inclined Towards Secession

st discussing support for breaking the US up into smaller countries, the familiar presumption about political dissolution being a means to the end of an ethnostate (or ethnostates). Here again is the graphic by region and by partisan affiliation: The Heartland is the whitest of the three regions (78% as of 2012). It is also the least enthusiastic about the idea of political dissolution. The Heartland is followed by the Mountain (65% white) and the Northeast (66% white). The two regions with the strongest support for secession–the South (59%) and the Pacific (46%)—are also the least white ones. Democrat support is strongest in the minority-majority Pacific. To the extent they want an ethnostate, it’s a non-white one!

The regional differences aren’t large, but the whiter the region, the less inclined it is towards secession. This is not what we would expect if support for political dissolution was predominantly racial in motivation.