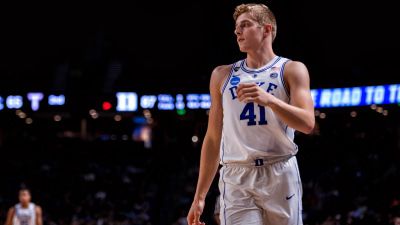 Will White Basketball Players Ever Come Back?

In the 1977 NBA finals, a mostly white team of Portland Trailblazers defeated a mostly black Philadelphia 76ers variety assortment of would-be superstars (a surprisingly ineffectual Dr J, a disastrous George McGinnis, Darryl Dawkins, World B. Free, etc). Back then, whites (Bill Walton, Bobby Jones, and Don Buse) were a majority of the All NBA Defense first team in both 1977 and 1978.

But blacks today are a lot better at playing defense & team basketball today than in 1970s.

The NBA had another downturn in the late 1990s-early 2000s when the generation of black kids who had grown up during the Crack Years got to the pros and couldn’t make free throws. The 2004 Olympic Dream Team losing three games in the Olympics was particularly symbolic of how bad black American basketball had gotten after the glory days of the Jordan Era.

But the NBA made some rule changes to make the game less violent, imposed a dress code against gangsta clothes (players constructively responded by dressing like nerd Steve Urkel if he were rich and cool), the game finally took the 3 point shot to heart. The quality of the game leapt upward and interesting new trends emerged.

This ought to be a lesson to people who say that baseball will never get itself out of its current rut of sabermetrics-derived Three True Outcomes play (homer, strikeout, or walk). It’s not actually all that hard to improve sports to make them a little more entertaining.

On the other hand, trends might go too far. For example, a decade ago, Bill Simmons predicted in his big Basketball book that George McGinnis’s record for most turnovers would never be broken. For example, the NFL/AFL single season record for interceptions thrown is George Blanda’s 42 in 1962, while the most in this century was only Brett Favre’s 29 in 2005.

But in 2017, both James Harden and Russell Westbrook broke McGinnis’s old ABA record. Westbrook is pretty much of a one-man show at OKC, but Harden plays for the super data-driven Houston Rockets that lost in this year’s semifinals to Golden State in the seventh game by missing, roughly, a million 3-pointers. Harden also often plays what Chick Hearn used to call “matador defense” where you stick your hand out as the dribbler rushes by and see what happens.

But Harden’s George McGinnis impression is evidently doing a lot right to satisfy Houston’s moneyball management. (If Harden starts shooting jumpshots one handed like McGinnis, that might be a little much, though.)

Nobody had done that since Oscar Robertson in 1962, the legendary season in which Wilt Chamberlain scored 100 points in a single game and averaged 50 points per game. The year, nobody besides the Boston Celtics cared much about playing defense or even winning. The league’s strategy in 1962 was to have the players run up and down the court and shoot fast in order to run up outlandish statistics to take some space in the newspapers away from the Pro Bowler’s tour.

So, a lot can change in sports as one trend gets old and is replaced by another.

But will white players ever come back in fashion? Perhaps if blacks go into a broad society-wide decline in self-discipline like in the 1960s and around 1990.