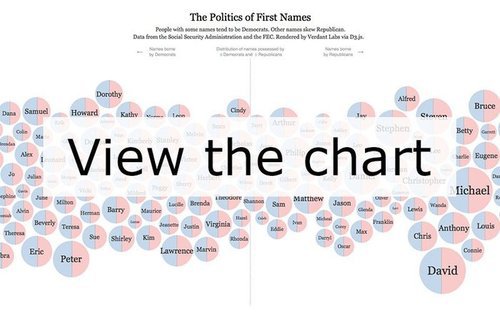 Apropos of my post in March about the website that ties names to political parties, leftist scribe Matthew Yglesias tweeted this news yesterday: "My son’s getting the very left-wing name Jose (after my very left-wing grandfather!)".

His Tweet links to Vox, which in turn links to Verdant Labs, which connected names to ideology, using data from the Federal Election Commission and Social Security Administration. Wrote the authors:

It turns out that Democrats prefer certain first names, and Republicans prefer others. We encountered this phenomenon while building the name metrics for the Nametrix baby names app.

Of male names that are at least fairly common, the most Democratic are Jonah and Malik, and the most Republican are Delbert and Duane.

For females, the most Democratic are Natasha and Maya, and the most Republican are Bailey and Brittney. ...

So, where does this phenomenon come from? Are our views significantly influenced by our names? That doesn't seem all that likely. More likely, Democrat parents prefer certain names (e.g., Noah), Republican parents prefer others (e.g., Trent), and their children inherit some of their politics.

That said, parents don't necessarily have the last word. Take the incoming Senate Majority Leader, for example. Addison Mitchell "Mitch" McConnell, Jr. is a Republican, but Mitchell is most often a Democratic name, and Addison is only slightly to the right. What about Mitch, the name he goes by, though? Solidly Republican.

The website conveniently separates names for men and women. A quick glance shows this has no predictive value at all, given that so many the names listed are standard Christian (and "white") names.

The "How Democratic Is Your Name?" device, which permits you to plug in names, shows that "white" or Christian names are almost evenly split between Democrat and Republican, while the Verdant Labs site shows some of them to be much more to one side or the other. As well, Verdant Labs' comparison does not contain crazy black names such as Rayshawn or Antwan.

Yglesias correctly wrote that Jose is a very left-wing name, as the "How Democratic?" site shows. Almost 75 percent of voters named Jose are Democrats.

And that's why President Obama wants the amnesty!