The countdown continues toward California awarding official driving permits to approximately 1.4 million illegal aliens at a huge pricetag to the citizen taxpayers $141 million is the states estimate for the program, although that sounds low given all the associated costs. 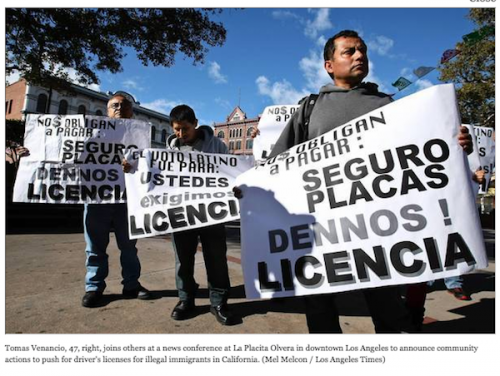 The state is bending over backwards to serve the foreign lawbreaker community by expanding hours, opening new DMV offices and hiring 900 new employees to process the illegals. Sacramento could have passed the enormous costs onto the people whom the policy benefits, but it has not.

I noted last January that the cost of a DL was $33 and the price is not being raised for illegals. Most illegals would probably spend hundreds of dollars for a legal driving permit, given the hassel of driving unlawfully to reach their stolen jobs. Instead, Mexifornia is forcing law-abiding citizens to pay for services made for illegal aliens.

The new licenses, which will cost $33, will look almost identical to regular licenses. The only notable difference will be the phrase: “Federal limits may apply” on the front of the license. The back will read: “This card is not acceptable for official federal purposes. This license is issued only as a license to drive a motor vehicle. It does not establish eligibility for employment, voter registration, or public benefits.”

The aliens will be required to pass written and driving tests, but its doubtful those steps will reduce the carnage from (previously) unlicensed drivers, since drunk driving is a cultural value among Mexicans. Its likely that driving deaths will increase following the policy surrender.

On the verge of granting hundreds of thousands of drivers licenses to immigrants in the country unlawfully, the California Department of Motor Vehicles will extend its hours and offer more appointments next year.

In January California will join the ranks of states that offer driving permits to undocumented immigrants. The rollout hit a snag when federal officials rejected a proposed license design as too subtle but eased back on track after California redesigned the IDs to make them conspicuously different from conventional licenses.

The Department of Motor Vehicles has been steadily building towards an influx of license applicants projected to reach 1.4 million people over the next three years. The DMV has already announced a series of Spanish-language informational videos and last week unveiled emergency regulations establishing which forms of identification immigrants can use to prove residency and receive licenses.

Now the department has announced it will expand Saturday hours by appointment, open up more appointment slots in certain offices and allow applicants to schedule appointments 90 days in advance, up from the current 45-day limit. The new options will be available to anyone, immigrant or otherwise, applying for their first California license.

“DMV is committed to providing excellent customer service to all Californians,” DMV Director Jean Shiomoto said in a statement. “Customers with appointments have much shorter wait times, and now all customers seeking new driver licenses will have extra appointment opportunities.”

Lawmakers and Gov. Jerry Brown approved a budget in June that allocates an extra $67 million to cover the cost of training DMV staff and opening new field offices.