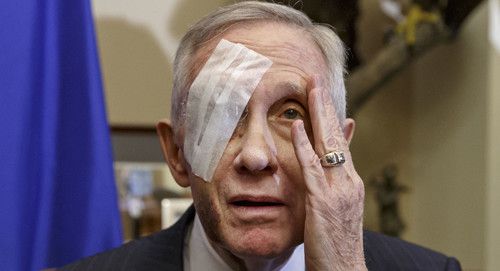 Why Did Harry Reid Go Bad On Birthright Citizenship? His Wife’s Ethnic Animosities

Harry Reid, when he was sane, agreed with us on Birthright Citizenship! pic.twitter.com/ypiE1QWKag

On Wednesday President Trump launched a devastating Tweet (above) against former Senator and Arch-rogue Harry Reid, pointing out

Harry Reid, when he was sane, agreed with us on Birthright Citizenship!

“If making it easy to be an illegal alien isn’t enough, how about offering a reward to be an illegal immigrant. No sane country would do that, right?” Reid, a Democrat, asked his peers on Sept. 20, 1993. “Guess again. If you break our laws by entering this country without permission and give birth to a child, we reward that child with U.S. citizenship and guarantee a full access to all public and social services this society provides — and that’s a lot of services.”

(Famous, that is, amongst those who know their immigration facts. Wikipedia’s long piece on Reid currently carries no reference to it.)

In 2006, supporting one of the Bush Amnesty/Immigration Acceleration Bills, Reid gave what AP described as

an unusually personal speech…In near-confessional tones, Reid said he had once supported legislation to close the borders between Mexico and the United States…

His wife, whose father was a Russian immigrant, confronted him, Reid recalled…

Discussing this at the time in Senator Harry Reid: Hearing Ancestral Voices? I asked

Could the couple be a prize case of the "Jerusalem Syndrome" discussed by Steve Sailer yesterday (examples 2 & 4)?

Apparently I could not then find satisfactory proof of what I suspected. Now it is abundant:

Landra (née Gould), was raised Jewish, and the Reid family has a mezuzah on the doorpost of their Searchlight, Nev. home in honor of that heritage…Reid’s eventually close relationship with Landra’s parents got off to a rough start. Mr. Gould apparently tried to break up the couple because the Goulds “wanted their daughter to marry a Jewish boy,” according to Reid.

So what we have here is another case of the force John Derbyshire questioned in Why Does Rep. Kevin Yoder (R-KS) Hate America? Why Do Jewish-American Pundits Hate Mike Anton? and which Kevin MacDonald  explained in Is Immigration Really A "Jewish Value"?

Jewish organizations are unanimous in support of the Amnesty/ Immigration Surge drive. This support for liberal immigration laws has a long history—the granddaddy of them all being the 40-year campaign to enact the 1965 immigration law that opened the door to heavy immigration of all the peoples of the world.

But what is striking is that Jewish immigration enthusiasts have portrayed themselves as motivated entirely by a set of ethical values that are unique and central to Judaism.

Still, I suppose being recruited into an effort to destroy your nation to gratify your wife’s ethnic animosities is less reprehensible than simply because you have been bribed.