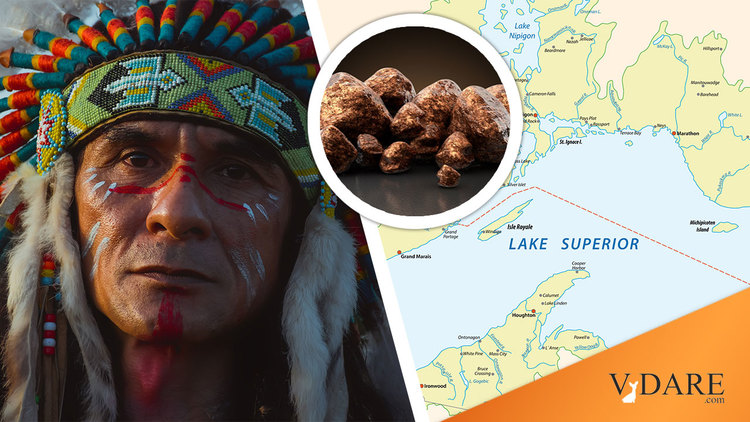 Why Did American Indians Go From The Copper Age Back To The Stone Age?

If you look at a map of Lake Superior, you’ll see the U.S.–Canada border runs down the middle of the lake, except it loops north to put Isle Royale in the U.S. That’s because when negotiating the peace treaty at the end of the war of U.S. Independence, Ben Franklin had heard that Indians mined copper on Isle Royale, and Ben usually got what he wanted, in diplomacy and much else.

But if they had copper, how come American Indians did not have sophisticated metal weapons when the white man arrived in 1492?

About 8500 years ago, hunter-gatherers living beside Eagle Lake in Wisconsin hammered out a conical, 10-centimeter-long projectile point made of pure copper. The finely crafted point, used to hunt big game, highlights a New World technological triumph—and a puzzle. A new study of that artifact and other traces of prehistoric mining concludes that what is known as the Old Copper Culture emerged, then mysteriously faded, far earlier than once thought.

The dates show that early Native Americans were among the first people in the world to mine metal and fashion it into tools. They also suggest a regional climate shift might help explain why, after thousands of years, the pioneering metallurgists abruptly stopped making most copper tools and largely returned to stone and bone implements.

Earth’s largest and purest copper deposits are found around North America’s Great Lakes. At some point, Native Americans learned to harvest the ore and heat, hammer, and grind it into tools. They left behind thousands of mines and countless copper artifacts, including lethal projectile points, hefty knives and axes, and petite fish hooks and awls.

…This month in Radiocarbon, the team reports that the most reliable dates, combined with the sediment data, indicate the Old Copper Culture emerged at least 9500 years ago and peaked between 7000 and 5000 years ago. That makes it at least as old, and perhaps older, than copper-working cultures documented in the Middle East, where archaeologists have documented a copper pendant believed to be 8700 years old.. …

But why did the ancient copper experiment abruptly end? Bebber’s work replicating Old Copper–style arrowheads, knives, and awls suggests they weren’t necessarily superior to the alternatives, especially after factoring in the time and effort required to produce metal implements. In controlled laboratory tests, such as shooting arrows into clay blocks that simulate meat, she found that stone and bone implements were mostly just as effective as copper. That might be because Great Lakes copper is unusually pure, which makes it soft, unlike harder natural copper alloys found elsewhere in the world, she says. Only copper awls proved superior to bone hole punchers.

Amerindians never progressed onward to combining copper and tin into bronze. Arsenic bronze came first in Iran, but it’s poisonous to smelt. Tin bronze is found in Serbia from 6500 years ago.

Pompeani has identified another potential contributor to Old Copper’s fade about 5000 years ago. Sediment cores, tree ring data, and other evidence suggest a sustained dry period struck the region around that time, he says. That could have fueled social and ecological disruptions that made it hard to devote time and resources to making copper tools.

In other words, the weather around Lake Superior got nicer.

So in 1492, Indians had copper awls and some copper jewelry but not much of what you’d call a metal-based civilization, the way Old World civilizations are labeled by the dominant metallurgy of the time such as Bronze Age and Iron Age.