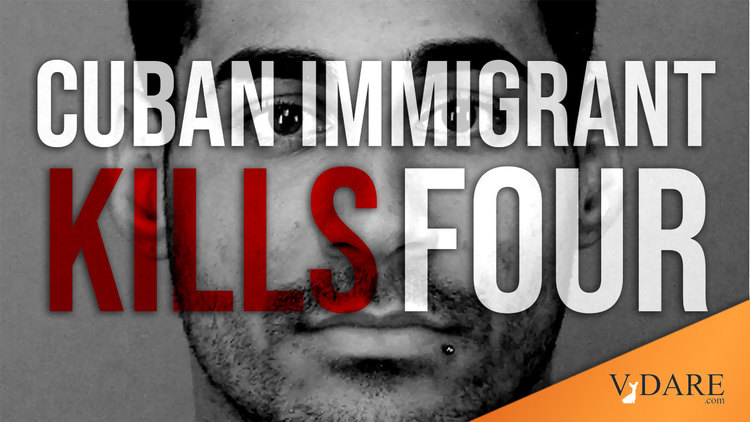 Why Are Leftists Trying To Free The Cuban Immigrant Truck Driver Who Killed Four Coloradans In A 28-Car Crash?

Rogel Aguilera-Mederos is a Cuban immigrant (a Green Card holder) who was driving a truck on a steep grade in Colorado on April 25, 2019. He crashed doing 85 in a zone restricted to 45 mph because of the grade, and killed four people in what was actually a 28-vehicle crash.

He claims it was brake failure, but aside from the speed, and the fact that a professional trucker should be able to slow a truck without the use of brakes by downshifting, there's an escape runway on this grade expressly designed to allow truck drivers with no brakes to get off the road without killing people.  Aguilera-Mederos failed to use it, and as result, he was charged with vehicular homicide, et cetera, and convicted.

Rogel Aguilera-Mederos, who was 23 at the time of the crash, was sentenced in Colorado last Monday to 110  years in prison after he was found guilty on 27 counts in the 2019 crash that killed four people and injured others.

This has resulted in a lot of crying. A juror who found him guilty is crying, because he didn't know he'd get 110 years:

"I cried my eyes out," the juror, who wished to remain anonymous, told FOX31. He called the sentence "100-fold of what it should have been."

"There is just something wrong to where a judge cannot intervene in some way and say the way this is written is not right," the juror said.

Aguilera-Mederos himself is crying, because

"I am not a criminal," he said while tearing up. "I am not a murderer. I am not a killer. When I look at my charges, we are talking about a murderer, which is not me. I have never thought about hurting anybody in my entire life." [This may be a translation; he used an interpreter at the trial.]

I have to point out that when you're charged with negligent homicide, as, say, Alec Baldwin may be over his shooting of  Halyna Hutchins on a film set, what you are charged with is "not thinking."

Also, crying, or possibly whining, is a friend of criminals everywhere, Kim Kardashian, who says that the verdict makes her "so sick":

Kim Kardashian sounds off on Rogel Aguilera-Mederos' 110-year sentence: 'Makes me so sick' https://t.co/Y7qQhD5WrE via @foxnews

"I know everyone has been posting about Rogel Aguilera-Mederos this week. I took a deep dive in it to figure out what the situation is," the reality star and fashion mogul wrote in her Instagram Story Tuesday. "For those who don’t know about this case, Rogel Aguilera-Mederos is a 26 year old that was sentenced 110 years in prison for driving a semi-tractor-trailer and crashed into traffic killing four people. He was not drunk or under the influence, his brakes on the semi-tractor-trailer failed."

Kim, who recently passed the baby bar exam, which is the First-Year Law Students’ Examination, added that she believes the mandatory minimums at play were not just a hindrance in this specific case, but to the concept of judicial discretion entirely. …

Kardashian specifically called on Colorado Governor Jared Polis to "do the right thing" and change the law as well as commute Aguilera-Mederos’ sentence. Gov. Polis said Thursday that he had not yet received a clemency application from Aguilera-Mederos, but his office reviews every such application.

The star concluded her lengthy Instagram Story on the matter by calling out prosecutor Kayla Wildeman, who recently came under fire after a now-deleted Facebook post on her personal page showed an image of a trophy made from a brake shoe to celebrate the conviction.

"Another shocking part of the case is this post by the prosecutor after his conviction," Kardashian wrote over a small picture showing the original Facebook post. "Four people died in this tragic accident. Rogel has a life sentence for the accident, which will not only destroy his life, but it will also impact his wife and son’s life. And yet, for some reason the prosecutor thought it would be funny to post a photo of a brake shoe trophy she received from a colleague with a plaque? Makes me so sick."

Oh, and the prosecutor's office is also saddened. They filed the 27 counts, but seem to regret it:

A petition calls for leniency for a truck driver who was sentenced to 110 years in prison for causing a crash that killed four people in Colorado.https://t.co/eTfWZ7zTka

Cyndi Lauper and a lot of people who signed a petition seem to be unhappy:

Not crying at all: the dead, because they can't, anymore. Possibly still weeping: the injured survivors of the crash, and the relatives of the deceased.

I say "possibly still weeping" because the press doesn't seem to care about their tears.