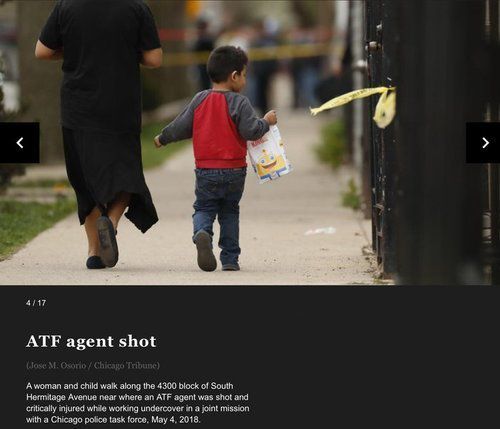 A story about an ATF Agent injured in a shooting while working undercover looking for illegal rifles in Chicago doesn’t say anything about what the shooter might look like.

However, the neighbor quoted is named Luz Campos and Google Maps says that many local stores have Spanish signage, so I’m guessing Hispanic immigrant gangs.

The wounded agent is part of a strike force formed last June to cut the flow of illegal guns into Chicago and crack down on people repeatedly arrested on gun charges, officials said. Twenty ATF agents were assigned to the task force, along with 20 officers from the Police Department and the Illinois State Police.

In Back of the Yards, the ATF agents have teamed with Chicago police to investigate gang-related rifle shootings that have become more common in that area over the last two years. The Tribune has reported that more than 140 people have been shot — 50 of them fatally — from the fall of 2016 to the end of 2017 by gang members wielding rifles as their use spread across the South and Southwest sides.

The agent is the fourth law enforcement officer to be shot in Back of the Yards in the last year.

$61,000 reward offered for information in shooting of ATF undercover agent in Chicago , By Madeline Buckley, Jeremy Gorner,  Chicago Tribune, May 4, 2018

A lot of Chicago's incredible violence is done by urbanized blacks who mostly use pistols, with which they are not terribly good shots.

Rifles are rarely used by criminals at all, as I noted in post about the Parkdale shooting: Rifle Murders Are So Rare, Florida Radiologist Had Only Ever Seen One Previous Case. But that's Americans—Hispanic gunmen in Chicago aren't native Chicagoans, they're from Mexico or El Salvador.