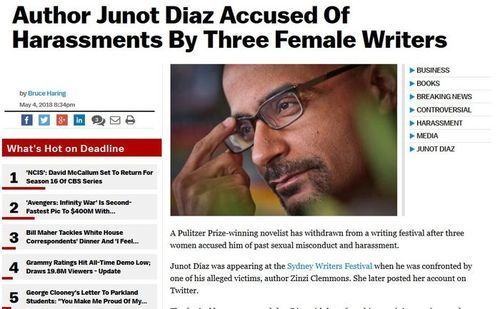 And Then They Came for Junot Diaz

Unlike American Indian author Sherman Alexie who got MeTooed awhile ago but comes across, at least on the page, like a decent guy, Dominican-American Person of Color writer superstar Junot Diaz comes across as a hate-filled jerk in his prose. But mostly he’s confined his hate writing toward the Current Year’s designated hate objects, white people, so he was feted until today.

But now the dam has broken and he is suddenly in big trouble for “misogyny:”

I’ve been waiting for this one to come out for a long time.

Here’s my story about Junot Díaz. It’s corroborated by my journal entry the next morning; emails to family, friends, and colleagues shortly thereafter; and my date, who was sitting beside me:

I was 32. I was invited to a dinner after a talk Díaz had given about “the importance of love” at the NC Literary Festival, Friday, April 4th, 2014. … My debut novel was due to come out the next month, and I’d brought an advance copy to give Mr. Díaz as a gift, understanding him to be both a genre fiction fan and a feminist. I sat next to him. The table struck up a light conversation about the significance of statistics in publishing. I made a point emphasizing how personal narrative is important in empowering the marginalized. He said (and this is my memory, so I’m not including quotation marks), Well, I don’t know if you know how statistics work, but that’s like saying, Oh, I haven’t been RAPED, so RAPE must not exist.

His voice had risen to a shout. He literally shouted the word “rape” in my face. This is after knowing me for maybe ten minutes. His response was completely bizarre, disproportionate, and violent. I was speechless and felt sick. I would have, anyway, but this was also only two weeks after I’d been sexually assaulted in Belize.

The dinner just got worse from there. I’ve never experienced such virulent misogyny in my adult life. Every point I made—ABOUT issues women face in publishing—he made a point of talking over me, cutting me off, ignoring me to talk to the other famous (male) writer at the table, who happily participated in the erasure (congratulations, Peter Straub, you were also awful that night). What’s so ironic is that I remember trying to make a point about how a piece of mine had just been rejected by The New Yorker, and I’d never be able to tell whether it was bc of bias or not, given their dismal VIDA statistics. …

Díaz didn’t physically assault me. But shouting the word “rape” in my face is absolutely verbal sexual assault. Moreover, I was struck by the total disconnect between his public persona of a progressive literary idol and how he actually treated women.

See, women are the weaker sex, so it’s a career-ruining offense to disagree vociferously with one.

In contrast, whites are the enemy race, so it’s career-boosting to demonize them.

1
When I was in my mid-twenties I decided to apply for an MFA in creative writing. …

2
I didn’t have a great workshop experience. Not at all. In fact by the start of my second year I was like: get me the f*** out of here.

So what was the problem?

3
Some of you understand completely. And some of you ask: Too white … how?

… Too white as in the MFA had no faculty of color in the fiction program—like none—and neither the faculty nor the administration saw that lack of color as a big problem. (At least the students are diverse, they told us.) Too white as in my workshop reproduced exactly the dominant culture’s blind spots and assumptions around race and racism (and sexism and heteronormativity, etc). In my workshop there was an almost lunatical belief that race was no longer a major social force (it’s class!). In my workshop we never explored our racial identities or how they impacted our writing—at all. Never got any kind of instruction in that area—at all….

From what I saw the plurality of students and faculty had been educated exclusively in the tradition of writers like William Gaddis, Francine Prose, or Alice Munro—and not at all in the traditions of Toni Morrison, Cherrie Moraga, Maxine Hong-Kingston, Arundhati Roy, Edwidge Danticat, Alice Walker, or Jamaica Kincaid. In my workshop the default subject position of reading and writing—of Literature with a capital L—was white, straight and male. …

100% percent white, straight and male like Francine Prose or Alice Munro? Did Diaz even reread his first draft before publishing it in The New Yorker?

Oh, yes: too white indeed. I could write pages on the unbearable too-whiteness of my workshop—I could write folio, octavo and duodecimo on its terrible whiteness—but you get the idea. …

“Unbearable too-whiteness?” Isn’t the joke (from Kundera’s Unbearable Lightness of Being) “unbearable wightness?”