This is true—the VPC is the SPLC of gun control, and studies like this count only the number of justifiable homicides by gun owners—most self defense uses of guns don't involve shooting. A gun can save your life just by being present, as long as the bad guy knows it's present.

Most police officers never commit justifiable homicide, but frequently save themselves by drawing and pointing a gun, as happened when Cpl. Eric Casebolt was menaced by two hulking black "teens" in McKinney, Texas. 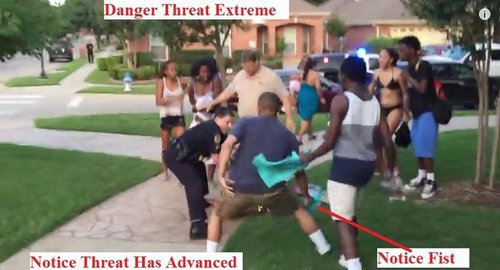 It's true that Casebolt has come under attack by Social Justice Warriors and the Minority Occupation Government, but he wasn't beaten to death by a mob, and his self-defense wouldn't count on these bogus studies.

But since this is VDARE.com, I'll ask a different question: why are the hands on the gun white?

Blacks lead the nation both in murders and in justifiable homicides, a  fact noted by Jared Taylor in his 1993 book Paved With Good Intentions,

So if  The Hill is tweeting in favor of gun control, and sneering at the use of guns for self-defense, the image should look like this: 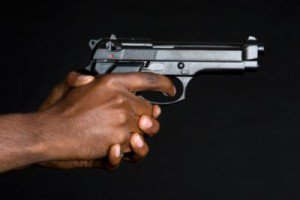