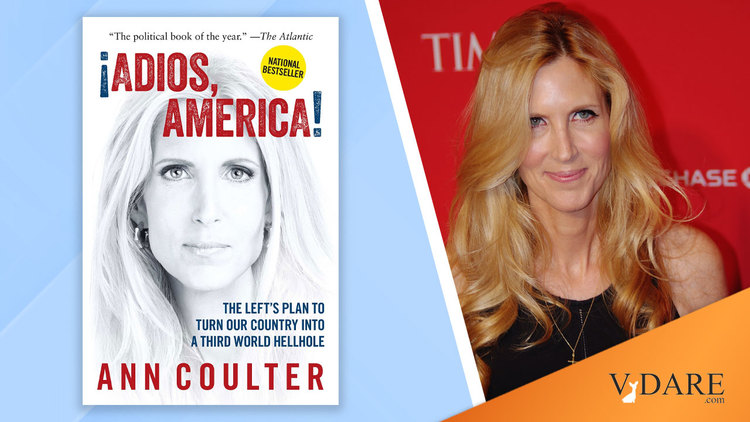 In 2001, after Ann Coulter wrote a column calling for racial profiling of airline passengers after 9/11, Jonah Goldberg "fired" her. (She wasn't actually an employee, but they stopped running her column.)

A search of National Review for "Adios, America" finds it only in the bookshop, where it's loaded automatically, and in the Ricochet Podcast, which is not really part of National Review—they subscribe to it. ( A good interview, by the way.)

The name of the book also appears in Thomas Sowell's syndicated column How to Open the Mind of a College Graduate, which again is not produced by NR management.

So when is National Review, the premier flagship of the Beltway Right/Conservatism, Inc. going to review this book? Why aren't they promoting it? Even Mark Krikorian doesn't seem to have been allowed to mention it in his NR slot.

Perhaps Krikorian  will mention that he was at Coulter's National Press Club book rap. Perhaps not.

So, given that this book is now at least a #2 New York Times bestseller, why isn't NR doing anything about it? Fear of MediaMatters? Or fear of donors? I don't know, but when Pat Buchanan published State Of Emergency in 2006, we published an article about it called The Conservative Best-Seller That National Review Won't, Well, Review.