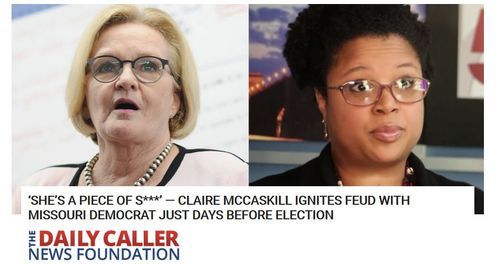 The Daily Caller has the story:

Democratic Missouri Sen. Claire McCaskill sparked a fierce backlash from a Democratic legislator in her home state after listing her as an example of a “crazy Democrat.”

In a scathing series of tweets on Monday and Tuesday, Missouri Democratic state Sen. Maria Chappelle-Nadal referred to McCaskill as “Dixie Claire,” described her as a “piece of shit,” compared her to a slave owner and accused “McCaskill and her racist democratic friends” of alienating the party’s base voters.

McCaskill raised eyebrows in the final weeks of the midterm campaign by running a radio ad that described McCaskill as “not one of those crazy Democrats.”

When pressed on Monday for examples of “crazy Democrats,” McCaskill pointed to Chappelle-Nadal, who sparked outrage in 2017 by calling for President Donald Trump’s assassination.

“We have a state Senator here in Missouri that actually advocated for the assassination of President Trump. That’s a crazy Democrat,” McCaskill said in an interview with Fox News’s Bret Baier.

Here's a Tweet from when Maria Chappelle-Nadal was hoping the President got shot:

A Missouri State Senator from St. Louis has now called for the assassination of @realDonaldTrump. Keep it classy @MariaChappelleN. pic.twitter.com/JTrkxk4Pkz

And here she is on McCaskill: 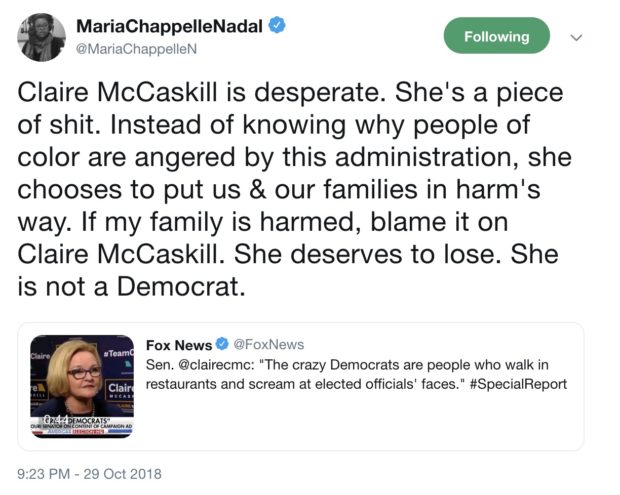 Of course, Chappelle-Nadal is a Missouri STATE Senator, representing Missouri's District 14, of aboout 160,000 people, and McCaskill is a US Senator representing  Missouri's six million-plus residents, who are 84.0% white. District 14, which includes Ferguson, MO and parts of St. Louis, is not.

It's another example of the problems Democrats will have as they morph into the Black Party.