When Immigrants Come to Conquer...

Christopher Hitchens recently visited his English birthplace after a long absence and reported on the dismal scene.

He uses the title of Melanie Phillips book, Londonistan, as a descriptor of the newly unBritish city and a word that appears commonly enough to indicate the term has struck a chord. It must be the mosques and burqas on the street. And the Islamic terror bombings of July 2005 that killed 52.

The Sons of Allah have made no secret of their goal of a totalitarian Islam-run planet and Britain is a speedbump on the way to the Caliphate.

They say that the past is another country, but let me tell you that it's much more unsettling to find that the present has become another country, too. In my lost youth I lived in Finsbury Park, a shabby area of North London, roughly between the old Arsenal football ground and the Seven Sisters Road. It was a working-class neighborhood, with a good number of Irish and Cypriot immigrants. [...]

It's impossible to exaggerate how far and how fast this situation has deteriorated. [...] I find myself haunted by a challenge that was offered on the BBC by a Muslim activist named Anjem Choudary: a man who has praised the 9/11 murders as "magnificent" and proclaimed that "Britain belongs to Allah." When asked if he might prefer to move to a country which practices Shari'a, he replied: "Who says you own Britain anyway?" A question that will have to be answered one way or another. [Londonistan Calling, Vanity Fair, June 2007]

Incredibly, Hitchens says he is "in favor of multiculturalism. I'm defending it against the hideous challenge from political Islam," so he apparently hasn't entirely abandoned the foolishness of his youthful leftism. Normally, multiculturalism includes Islam; otherwise it wouldn't be a universal secular (albeit failed) ideology that purports to answer all of life's pressing questions. So Hitch's attitude is odd in this regard.

Still, it's a strong article that should get some attention among readers whose have been poorly served by the MSM's refusal to report Europe's meltdown into a puddle of pathetic appeasement toward Muslim invaders.

Below: Muslims demonstrate in London against Islam-critical cartoons in February 2006. 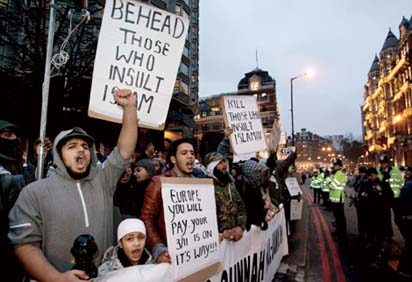