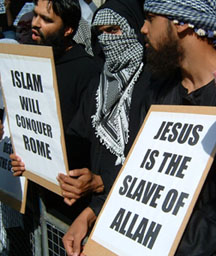 Imagine exiting church on a Sunday morning and facing dozens of hateful, threatening creatures like these. That's what happened yesterday in London [Catholic Londoner Blog: Just outside Westminster Cathedral today, 9/17/06].

The affront was part of the growing Islamic attack on western values of free speech and liberty generally that began on Friday with another overblown case of offended Muslim sensibilities. Part of the carnage was the murder of an old lady, a medical nun ministering to the poor, who was shot in the back in Somalia, apparently a reaction to the Pope speech controversy.

AN ITALIAN nun was killed by gunmen at a children's hospital in Somalia yesterday in an apparent revenge attack for the Pope's speech about Islam last week.

Sister Leonella Sgorbati, 65, left, was shot four times in the back by two men at the entrance to the hospital in the capital, Mogadishu. Her bodyguard was also killed. The Vatican said that it hoped that the "horrible tragedy" was an isolated incident.

The killing came after Benedict XVI expressed deep regret yesterday at the furious reaction to his remarks on Islam and holy war, saying that the text he quoted last week did not reflect his personal opinion. [Nun shot dead as Pope fails to calm militant Muslims, The Times 9/17/06]

Of course, a serious case of Muslim rage cannot be satisfied by one little murder. Several churches in the West Bank and Gaza have been firebombed since the most recent controversy kicked in.

Furthermore, a follow-up escalation was the demand from at least one member of The Religion of Peace that Pope Benedict be executed.

A notorious Muslim extremist told a demonstration in London yesterday that the Pope should face execution.

Anjem Choudary said those who insulted Islam would be 'subject to capital punishment'. [Londoners told - Pope must die, London Metro 9/18/06]

We knew that was coming, right?

The website Cartoon Body Count put the number killed by the Danish cartoon jihad at 139, so we may be only at the beginning of the current round of murderous Islamic attacks against our civilization.

Many Muslims openly declare their intention of destroying the West and replacing democratic institutions with an Islamic Caliphate run by clerics under Sharia law. Yet we continue to allow them to immigrate here, and they are coming in increasing numbers.

How much more trouble do we need to import?