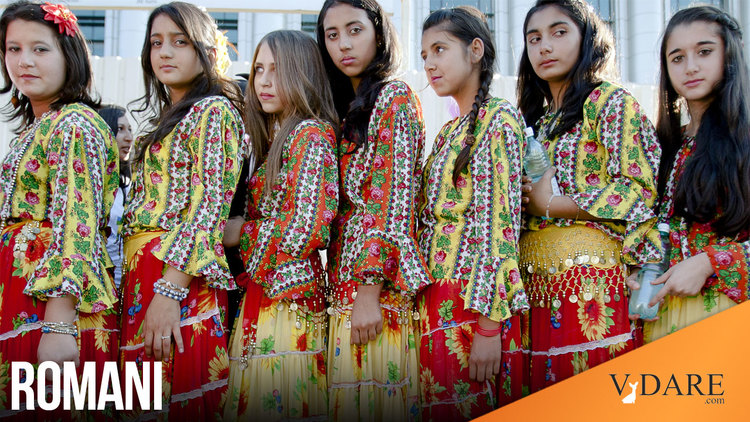 A Gypsy Is Haunting Europe…

Last Saturday's addition of ten new countries to the European Union has elicited much concern among Western Europeans about increased immigration from Eastern Europe. However, it's been hard for us naïve American readers to decode exactly which potential immigrants the Westerners fear most. The politically correct prestige press is of little help, so you have to turn to blunt-spoken tabloids like Britain's Sun, which recently headlined: "Grateful Gypsies set to flee their homes."

There are now as many as 12 million Gypsies in the world (their birthrate is far higher than that of other Europeans). A large proportion have until now been bottled up in Eastern Europe. They are in many ways the European Union's worst nightmare, even though the great and the good of the EU lack a socially acceptable vocabulary for even discussing in public their concerns about Gypsies (more fashionably known as Roma or Romani).

Last year, The Guardian (UK) wrote (Jan. 8, 2003) about the Gypsies under the title "Shame of a Continent," the shame being that other Europeans try to stay as far away from Gypsies as possible. The Europe Union has been telling the new members that they must start being nice to the Gypsies. In the only insightful comment in the article, Gary Younge explained:

"It is not so much a love of the Roma as a fear of them that has prompted the EU to advocate their rights. In 18 months' time, when the 10 candidate countries finally join, the right to free movement throughout the other 15 wealthier nations will be extended to all their citizens. That includes the Roma. Britain and others will no longer be able to deport them. So they want to do everything they can to improve their lot now, in the nations where they live, in the hope that a better-educated, housed, employed and less harassed Roma population would be less likely to leave."

Here are some Amazing Gypsy Facts, courtesy of the Guardian:

The Guardian, of course, blames this solely on discrimination. To even suggest that the Gypsies have a preference for, say, leisure over labor, or that they suffer a lot from dyslexia would be racist and thus unthinkable. (By the way, their apparent tendency toward dyslexia is balanced by their musical skill. The late classical pianist Balint Vazsonyi told me that in the top Budapest conservatory where he studied, there were numerous Gypsies who never learned to read music, but somehow made their way through this rigorous course of training on sheer musical ability.)

The Gypsies have been horrifically persecuted down through the seven centuries they've been in Europe. Otherwise civilized European countries are said to have subjected them to lethal "Gypsy hunts" all the way up into the 19th Century. Hitler massacred hundreds of thousands. The Communists tried to strip away their culture (but failed), and the newly democratic countries of Eastern Europe have tried to wall them off. For example, one of the first acts of our allies in the Kosovo Liberation Front in 1999 after we bombed Serbia into submission for them was to ethnically cleanse the Gypsies from Kosovo.

So, it can seem churlish to mention any reasons why their tormentors acted so dreadfully. In polite society, you are supposed to assume that this appalling history was simply caused by a 700-year long mass hallucination. But, you can't understand modern Europe without understanding the Gypsies, who make up a rapidly growing part of it.

Gypsies, who are evidently of South Asian origin, are often compared to Jews because of their victim status. Yet, in many ways, they are the anti-Jews. The part-Jewish, part-Gypsy American author Isabella Fonseca reported:

"The Gypsies have no heroes. There are no myths of origin, of a great liberation, of the founding of a 'nation,' of a promised land. . . . They have no monuments, no anthem, no ruins, and no Book. Instead of a sense of a great historical past, they have a collective unease, and an instinctive cleaving to the tribe."

Growing up in Southern California, far from the centers of Gypsy life, I knew only endearing, exciting images of Gypsies derived from Romantic masterpieces like Bizet's Carmen and Hugo's Hunchback of Notre Dame. My disillusionment began when backpacking around Europe in 1980. Wherever American and Australian college students came together, the conversation soon turned to how to avoid being victimized by Gypsy thieves, especially their small children.

As an American, I knew that the teenage males of some ethnic groups had a higher proclivity to steal, but I had never before heard of a group where many parents trained their toddlers to steal. Even more horribly, some parents break their children's teeth or bones as part of an insurance scam or to make them into better beggars.

We're not supposed to think about the victims of Gypsy criminals because, after all, crime victims are not real victims (i.e., they are just random human beings, not an organized political pressure group).

In their defense, gypsy criminals are less violent than most criminals, preferring swindles to brute force. Still, the National Geographic reporter Peter Godwin, sent to write a major story about the persecution of the Roma (April 2001), was, in a scene reminiscent of anti-American correspondent Robert Fisk's famous encounter with a Muslim mob, beaten up and mugged by a gang of gypsies he was trying to help.

"At the age of 4 he was kidnapped by a band of Gypsies, though prompt action by his uncle soon effected his rescue. 'He would have made, I fear, a poor Gypsy,' commented John Rae, his main biographer.")

In reality, the Gypsy culture trains its children from a very early age to be economic parasites. The Gypsies possess a classic "in-group morality." While extremely loyal to their clan, their culture inculcates in them an almost sociopathic disregard for the rights of outsiders.

The Rev. Larry Merino, who evangelizes among American Gypsies in Indiana, notes:

"Gypsies believe a myth that says a lot about the conception most people have of this group. It seems that a Gypsy stole a fourth nail at the crucifixion site that was destined to be used to nail the Savior's head to the cross. Since this act of larceny turned out to be an inadvertent act of mercy, God gave Gypsies the right to take things that didn't belong to them. Many Gypsies believe this is actually true! This being the case, it takes a missionary to this group a long time to undo what has been part of their culture for centuries."

That's why there's never been a Zionist or separatist movement among Gypsies. Jews could successfully start their own national homeland, away from their persecutors, but the Gypsies can't imagine living in their own country with no productive non-Gypsies to leech off.

The Communists made this traditionally nomadic people more sedentary, so an immediate deluge of Gypsies moving west may not be likely. Nevertheless, it's hard to imagine that all the Gypsies will stay in drab, hostile Eastern Europe when there are so many more cash-heavy and unsuspecting pockets to pick in the fat lands of the West.