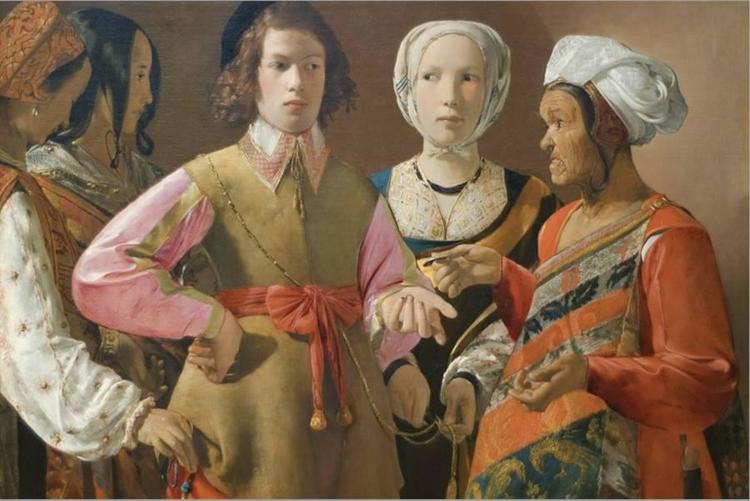 Gypsies: Then or Now

Here's The Fortune-Teller by Georges de la Tour from about 1630. A suspicious but stupid young toff is having his fortune told by the old crone while the three young confederates pick his pockets. The girl in profile on the left looks particularly Roma-ish, although the girl who is cutting the mark's medal (watch?) off looks Dutch.

Or then, again, as a 60 Minutes episode in 1982 argued, this picture that Metropolitan Museum of Art in NYC bought at great expense in 1960 could be, appropriately enough, a 1920s forgery. (It does look rather like a Norman Rockwell magazine cover, although Rockwell would have changed the color schemes of the dresses to make the old lady's hands stand out better against the background. )

De La Tour had been virtually forgotten until the 20th Century, so, like Vermeer, he would be a logical target for forgers since the provenance of even the most authentic De La Tour would be less certain than, say, a Leonardo, since Leonardo has been hugely famous ever since the later 1400s.

Then again, as the Met has strenuously argued, it might be authentic.

In any case, it's a fun painting.